Marcus Casey-Kirkman Junior (at right), aged 19, used to work as a driver for the health service at Mutitjulu, including being on after-hours stand-by.

His mother is from Maningrida and his father originally from Docker River, “a bit of both worlds, desert and Top End,” he says.

Six months ago he came back to Alice to live with his father, applied for a supermarket job but got no response.

After two months of waiting he was told by his job provider about the Coles Indigenous Employment Program.

Generously blessed with the gift of the gab, this morning he stood up in front of a small crowd of locals and 11 fellow graduates of that course, all in their red shirts and aged from 17 to 60, thanking the Coles managers for the opportunity.

After just seven intense days of training, including three days on-the-job work, and judging from results the scheme achieved over the past seven years, most of the group are having a New Start that actually deserves its name.

“I didn’t expect it to be so intense,” says Mr Casey-Kirkman.

“We had to be 15 minutes early every day, it got us up into a routine, gave us a lot of life skills, body language communication, eye contact, even speaking to someone, greeting the customer into the store.

“Someone’s coming into the shop, and he locks eyes with you, and you keep the eye contact locked, you smile and you say hello, ask them if they need any help.”

Course graduate Raelene Williams (above left) says she “worked with old people at Hetti Perkins but mainly doing a lot of training”.

The Coles opportunity “is the best that happened to us. That’s a proper job now,” she says.

What is she looking forward to most in her new job?

“I’d like to be a manager, too. Yes. We all would like to be, so we can show our people that we all can do it.

“I want to become a role model, you know, for the young generation, get them into jobs and that.”

She is clearly over the moon about the response she is getting from the supermarket customers: “They see us working, even our white friends, they are all happy.

“They say you’re doing great, even the community people, they are all happy to see us working in there – make us proud.” 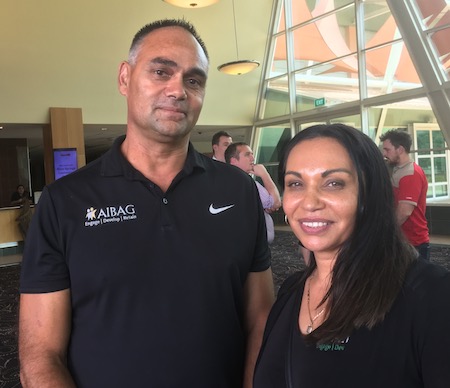 Significantly, it wasn’t all hard work, judging from a slide show at the function this morning: lots of laughs at inside jokes, cheekiness, comradeship.

A lot of the Coles Indigenous Affairs Unit’s success over seven years can be attributed to the Australian Indigenous Business Alliance Group (AIBAG).

The name makes it sound a lot bigger than it is: husband and wife team Leon and Tanya Harris (at right) bring their Aboriginal backgrounds to the effort. They also have a team of four employees.

“Attitude, commitment, and consistency to want to be part of a program leading to permanent part time employment at a minimum, no less than 15 hours a week” – these are the conditions for participation, says Mr Harris.

It’s a mixture of tough expectations and acknowledgement of  Aboriginal ways, including communication.

He says many of the candidates graduating this morning have never been employed. Some have been out of school for a number of years and are still jobless.

The standard “interviewing processes” have let them down – some of them for as long as 10 years of job seeking.

AIBAG, which also contracts to mining, wholesale, manufacturing and other major companies, swear by “training that gets people straight into the work place”. 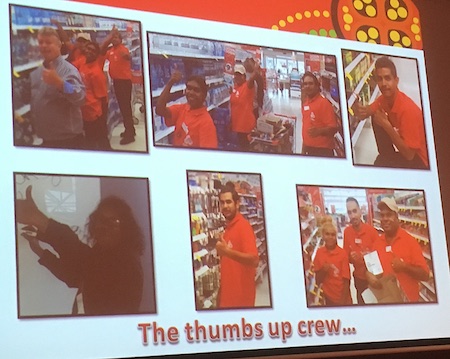 That raises questions about certificates issued by institutes such as Batchelor, awarding lots of Cert Ones and very few Cert Threes and Cert Fours and resolutely stonewalling questions about the numbers of their graduates moving into mainstream employment.

“We base all of our recruitment on attitude, consistency, very strict key performance indicators, and it’s a tough interview running for seven days where people will be held responsible for any lack of behaviour, or commitment, [such as] being a minute late from break,” says Mr Harris.

Does he rely on previous education and certificates?

“We believe in a flexible approach that still allows for their skills, their commitment, their consistency and all their other special attributes that are required to make it in employment.

“We are not worried about qualifications.”

A 87% retention rate for six months or more, and the advancement of many into management roles, are signs that Mr Harris has been getting it right in his seven years of work in WA and the NT for Coles.

“And half of these people didn’t bring in any qualification whatsoever.”

Several graduates of their intensive program have  moved up to positions such as second in charge or department managers in stores with some 200 staff. 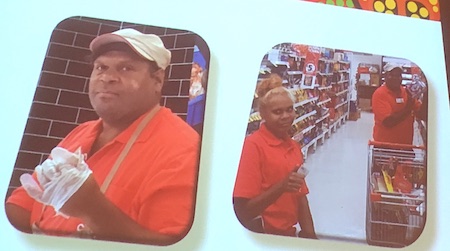 “None of these people today had a recognised tertiary education – and that’s the key to this Coles program,” says Mr Harris.

“Many generic mainstream recruiting process usually are based on standardised questions, with an emphasis for an outcome to an answer.”

Looking for a candidate with the right attitude “that’s not just going to be a one question process.

“It’s going to be in an environment where people feel comfortable talking, because there are more Indigenous faces involved.

“We need to do things that are a little less rigid, not as cut and dried as using sentences that can often cause our people to close down.”

That’s a routine nine years in the making by AIBAG.

Far from providing excuses for unreliability (“after a while they are just going to go walkabout on you” is something that can be frequently heard in Alice Springs) AIBAG found an efficient way to discover a job applicant’s skills for a variety of roles in a store, “to become all-rounders, taking up extra hours in different departments”.

The scheme is strongly focussed at moving staff toward full time employment – and that has started already during the seven day training ending today, when participants worked in various parts of the Alice Springs Coles store.

In this course the ultimately successful applicants had been competing in a field of just under 50 with 10 positions sought to be filled.

In fact 12 jobs were created, plus six casual positions because of the high standards of the applicants.

It had taken three weeks to make the initial selections during “information sessions”.

Says Mr Harris: “People have to be very accountable, very responsible, and show that they want to win their role.

“The employer can absolutely expect the employee to turn up.” 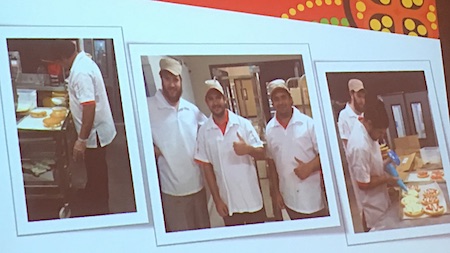 “Most of this group turned up half an hour early,” says Mr Harris.

“The idea is to re-program our minds, our thoughts, and to put them through a rigid training process, to ensure people are aware of the expectations.”

And people who consistently ran late “were thanked for their time and we released them early”.