Global traveller ran out of power only on the Stuart Highway 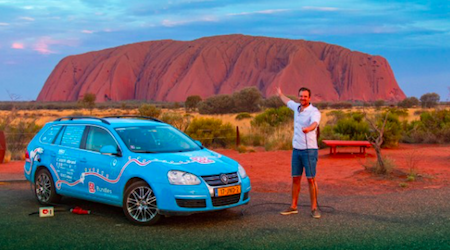 The only stretch on his trip from Amsterdam to Uluru through 33 countries where a Dutch adventurer needed a tow was the 255 kilometers between Glendambo and Coober Pedy.

Wiebe Wakker covered the other 80,000 kilometres in his electric car, recharging it as he went along his “Plug Me In” journey which started on March 15, 2016, enjoying hospitality from more than 350 people who offered him food, shelter and – well – a powerpoint.

He is now on his way to Alice Springs, with Sydney as his final destination, having already crossed the Nullabor “which everyone assumed wouldn’t be possible in an electric car,” he says in a media release.

“My aim is to inspire, educate and accelerate the transition to a zero carbon future.”

Mr Wakker says he managed to cross Europe, the Middle East, India and Southeast Asia “without any money”.