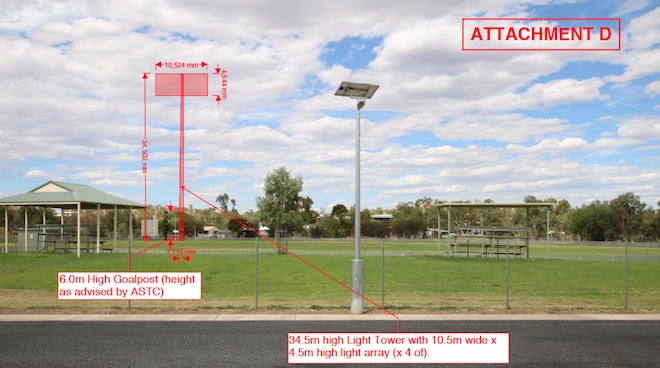 Above: Illustration of the proposal’s impact, courtesy Simon Pettitt.

Council came under fire last night by irate residents of the Albrecht Oval area for its proposal to erect light towers at the oval – four of them, 34.5 metres high, each at 750 Lux which is 250 Lux brighter than the lights at Anzac Oval.

The proposal apparently rests on a one-off, one hour community consultation conducted by the previous council, whose report amounted to a few sentences on a single page. According to local resident for 25 years, Simon Pettit, even this only followed nine months after the fact of council’s decision to approve the installation of the lights.

He contrasted this state of affairs to the 176-page report produced for Darwin City Council, following a “thorough, respectful and transparent” community engagement process over six months, when they faced a similar decision for Gardens Oval, but with dimmer lights – 500 Lux.

Is the current council happy to be associated with the process and decision of the previous council? he asked. If so, is it happy to be seen as “hypocritical”, given its criticism of the NT Government’s consultation process on the national Aboriginal art gallery?

Another local resident, Michael Crowe, outlined the negative impacts of the light towers on local residents. These included disruption from the dazzling light to sleeping patterns, especially for children, obstruction of views (superb in this area, straight across to the ranges), noise pollution (presumably from the conduct of training and matches) impacting on residents’ outdoor living  from Thursday to Sunday.

Residents who walk their dogs on the oval would suffer from restricted access.

The neighbourhood would be disturbed by dispersing crowds after events at the oval, especially given that there is no public transport in this area of an evening.

He asked council to reconsider its position, and examine all options including lighting at alternative venues, such as Jim McConville Oval (Gillen) and at Kilgariff.

Mayor Damien Ryan asked Mr Crowe if he had suggested that councillors may be sued over the Albrecht Oval decision.

“I’m aware people are considering their options,” replied Mr Crowe, telling councillors they need to be “really aware of these issues”.

She described her neighbourhood as a “nice villagey little area” and “very peaceful”. She wants to keep it that way.

“These light towers will be massive, 750 Lux, you will be able to see them from outer space!” she said.

She also didn’t want to see a “bunch of drunks” leaving footy matches, lurking in the area.

Mayor Ryan told the residents their questions would be taken on notice, without further explanation.

The residents sat on in the gallery, obviously hoping that their legitimate concerns would be dealt with later in the meeting. Eventually Mr Crowe interrupted proceedings to find out what was happening.

Mayor Ryan told him icily that given his statements earlier it would be “far safer” for the elected members to discuss the matter in the confidential part of the meeting.

Mr Pettitt wanted to know if he would actually get answers to his questions.

“We’ll come back to you in some form,” said the Mayor, ever gracious.

“In an email or a letter,” replied the Mayor.