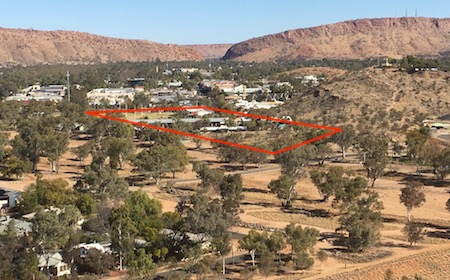 “No request has been made to Lhere Artepe to accept or reject the proposed site at Anzac Hill.”

This statement was made today by the town’s native title organisation in response to questions put to it by the Alice Springs News Online.

We had asked: “Did Lhere Artepe say or imply to the government that it accepts or rejects the government’s choice of the Anzac Hill precinct as the site for the gallery?”

Lhere Artepe’s statement also says: “There is no statutory role for Lhere Artepe at the moment and no proposal has been put to negotiate [an] Indigenous Land Use Agreement or to extinguish native title for the purpose of the National Aboriginal Art Gallery.”

In the NT Government’s final report about the three-months consultation about the gallery from June to August 2018, Lhere Artepe is the only organisation to be named in a chapter headed “Aboriginal individuals and organisations – key concerns and needs”:-

“The Aboriginal stakeholder’s views need to be respected and taken on board. The team consulted with Lhere Artepe, native title holders, Traditional Owners, custodians, respected Elders, leaders of Aboriginal organisations, and reached out to broader Aboriginal communities as part of the extensive consultation.”

The News asked Lhere Artepe what efforts it had made to ascertain its members’ views on the issues.

The organisation replied it had not been “formally engaged by the NT Government in the consultation process until the recent three months engagement process, and we have welcomed the opportunity to be consulted”.

There were meetings with the consultation team on June 28, July 26, August 15 and October 1.

“The project was discussed at the last directors’ meeting on September 8 and it was agreed that the directors would consult with members for the three estate groups, Antulye, Irlpme and Mparntwe and inform the next meeting of those views,” the statement says in reply to our questions put three weeks ago.

The organisation says it is focussing on any building being “reflective of the law and culture of Arrente people” and on employment and business opportunities linked to the construction and the running of the gallery.

The consultation meetings had been about the “general concept” and cultural issues “that are private”.

We are seeking a comment from Minister Dale Wakefield.

Central Land Council communications manager Elke Wiesmann says the Anzac Oval is freehold and owned by the Alice Springs Town Council. The site was not included in the native title determination.

The Alice Springs News Online is seeking clarification about the native title status of the Anzac Highschool site, which is part of the proposed gallery location. We understand it is government land.