Defence to close Stuart Highway for up to 12 hours 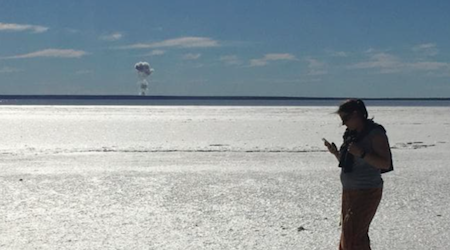 The Department of Defence will be closing the South Stuart Highway “intermittently” from now to October 21 between the Ingomar rest stop and the Woomera Prohibited Area (WPA) boundary north of Glendambo.

The department says this is for the “testing of equipment and weaponry required for the defence of Australia.

“To ensure public safety during these tests, an exclusion area has been set up which will result in intermittent road closures for up to 12 hours per suspension.

“On road closure days, uniformed Defence personnel will be stationed at the road closure points to prevent access.

“Roadside electronic signage will be in place just outside Glendambo and Coober Pedy to advise the public of road closures on the day.”

The department is not answering the following questions put to it by the Alice Springs News Online:

How long before a suspension comes into force will notice to the public be given, and how?

Is this the first time that the Stuart Highway in the WPA has been closed for this purpose?

Does it affect freight and passenger trains?

With the current government’s commitment to expanded weapons export, will the number of these closures increase in the future?

Have there been negotiations with the NT and SA governments about the impact on these states’ economies?

Will the uniformed personnel be armed?

Will provisions and accommodation be provided if people [affected by the suspensions] are caught short?

What is your assessment of the potential risk to travellers in what could easily be 40 degree heat?

This is the only [southern] route people from Alice Springs travel when there is a family emergency. What assistance (air transport, for example) is given?

What is being tested?

Why does it require road closure?

What is the risk to people who are on the highway inadvertently?

PHOTO by Jason Wright of an explosion near Woomera in June 2017, taken from Lake Hart.

From a bus operator: Road closed from Ingomar from 2pm today (October 4.)

A Defence Department official, Trevor Seebohm, when contacted by the Alice Springs News Online, said the highway will be closed from 3pm up to 11pm today. That is being advertised on display signs at Coober Pedy and Glendambo.

Meanwhile Brendon Lawson, of the Australasian Railway Corporation, which has the corridor rights for both the freight and the passenger rail services on the north-south line, says they will not be affected by the current defence operations near Woomera: There is a protocol for the testing not to impact train services, he says. The corporation acts like a “landlord” for the rail services, he says.


PLEASE NOTE October 8, 9.40am: We offered the Defence Department prominent space for paid advertising on our front page for its Stuart Highway closures, with express production (usually less than two hours). We explained that we don’t publish public notices as editorial matter. We emailed the department at 1.59pm on October 5. We have not yet received a reply.