Preaching 'treading carefully' then sending in the bulldozers 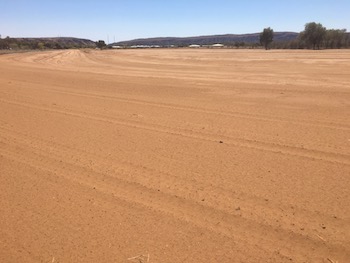 Territorians quite often get the feeling that the politicians ruling them live in a different country. Lands minister Eva Lawler seems to be living on a different planet.

At the auspicious occasion of opening a small park in Kilgariff on Saturday she seemed blissfully unaware that her department, in a display at the function, was preaching one thing while the bulldozers at the edge of the suburb were doing quite the opposite.

The Minister was posing for a photographer with (from left) senior lands public servant Peter Somerville, MLA for Namatjira Chansey Paech and the CEO of the Land Development Corporation, Tony Stubbin. (A very similar photo will no doubt be published in the local Murdoch paper tomorrow.)

About a metre behind Ms Lawler, pinned up on a notice board, were several pages of a draft report about the future expansion of Kilgariff: East of the current development is one proposed option; south on airport land (the other side of Col Rose Drive) is another. 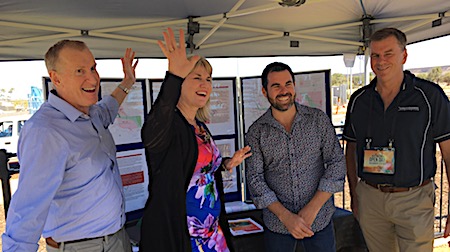 Earlier in the day Mr Somerville had declined to give us a copy of that report although it was in full view of the festive park-opening crowd: He said it was only a draft, although the Minister had sanctioned its display.

About 400 metres south of where Ms Lawler was standing are dozens of hectares of land now utterly denuded, stripped bare of almost all vegetation. For decades, in the living memory of many of us, these desert plants had done very well and the creek caused no inconvenience, let alone harm.

The vegetation had benefitted from water flowing in from the north, making its way through what is now housing land, flowing into the main creek bed to the east in times of heavy rain. St Mary’s Creek sometimes crossed Col Rose Drive – and still will, the massive earthworks notwithstanding.

The ravaged patch, from which the prevailing south-easterly winds can be expected to deposit tonnes of sand into the new homes of Kilgariff, extends along Col Rose Drive to the western bank of the creek, and possibly reaches into the creek itself.

The flora demolition job, still under way, is being done under instructions of Ms Lawler’s government and on land over which she has full developmental control. 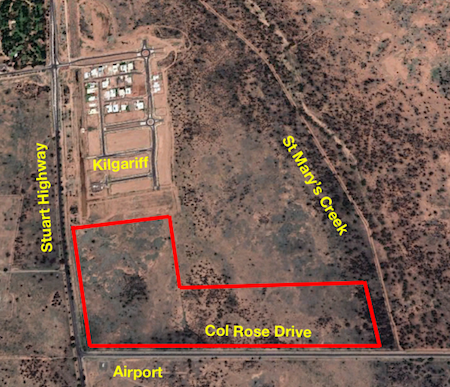 This Google Earth image was taken in November last year and clearly shows the vegetation, including substantial stands of trees. The red line indicates approximately the area now bulldozed barren.

The content of the report, dealing extensively with the St Mary’s Creek, could not be more effusive about its immense importance, and of the environment in the vicinity of Kilgariff in general, “protecting the significant cultural and landscape features of the natural environment.

“This includes protection of the St Mary’s Creek landscape which is the primary contributor of the natural character and amenity of the site”.

We need “walkable neighbourhoods that tread carefully on the natural landscape … St Mary’s Creek and associated native vegetation provide a key contribution to the natural and cultural character of the area,” it is written.

“Protection of these values within the confines of a very flat landform, natural stormwater flows and fragile soils will require care … natural ground cover is preserved wherever possible and disturbance of land not directly required for development is avoided … enabling maintenance of pre-development natural flows in the St Mary’s Creek riparian (that means relating to or situated on the banks of a river) corridor.” 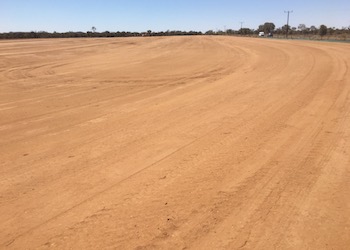 There needs to be “a developed district park facility … that connects the neighbourhood to the St Mary’s Creek landscape system and recreation pathway … a framework of surface drainage that uses linear open space as drainage paths and avoids any modification of St Mary’s Creek”.

Cynics may say whenever this government says something you can bet they will be doing the opposite.

Clearly the suburb in place already now had not been built around these environmental realities. A massive open drain is doing what many smaller one could have done, had the government acted on its own spin.

When they say the St Mary Creek environment needs to be saved you can bet it is doomed. The pictures tell the story.