Gallery: Council has no choice but to accept public's verdict

Government minders chose a location  for yesterday’s media conference which had an open Todd Mall shop as the backdrop: From Left – Mark Crees, Lauren Moss and Dale Wakefield.

The 7th of September 2018 will not enter the annals of the Gunner Government as a red letter day.

That means consultants around the globe (presumably) are now pondering how to link presentation of the world’s oldest living culture with the sale of coffee and other things in Todd Mall by creating a gallery on and adjacent to the Anzac Oval (no other site is to be considered).

Diary note for Monday: Check how many consultants have put up their hand and what is their calibre.

A council ballot, at a cost of $10,000, had closed a week earlier asking the public whether the council should make available the oval, which it owns on behalf of the community, for the gallery.

It is obvious that the council people knew the results of that ballot – a clear majority in opposition to the oval as the location for the gallery – at the time of the meeting because the elected members got them that morning, and eight hours later they were made public.

This would have been a good time to say to Minsters Dale Wakefield and Lauren Moss who were there: We put the issue to The People. The People have spoken. The council decision next Monday is a no brainer. Have a look for a site. Have a good day. Words to the effect.

Ms Wakefield and Ms Moss, following further in-house briefings in the government business centre in the Mall, walk from the meeting place south to a location in the Mall where they could have as background a shop whose doors were open.

It was a Media Event – whatever happened to the good old days of the press conference? – announcing the results of the government’s three months “engagement” with the public.

It was next to a noisy cafe – not ideal for audio recording – but hey, coffee and cafes in the CBD are prominent in this government’s national Aboriginal art gallery plan.

So, had there been a frank exchange between the government and the council a short while ago, the journos wanted to know. Clearly not, it seems.

“We are absolutely committed to work with council to get a positive outcome for the town of Alice Springs,” Ms Moss said, illustrating the disconnect between Local and Territory Governments and The People that is now reaching unacceptable proportions.

Ms Wakefield thanked “everyone for being part of the process” in making the gallery happen, which at the time sounded like wishful thinking, and she invited questions.

First was the man from the Advocate (motto: “We’re for Alice”), recipient of massive government advertising for Ms Wakefield’s “let’s have a coffee” campaign. 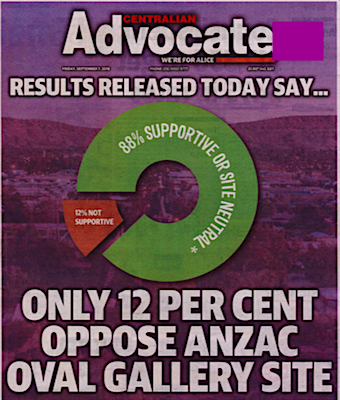 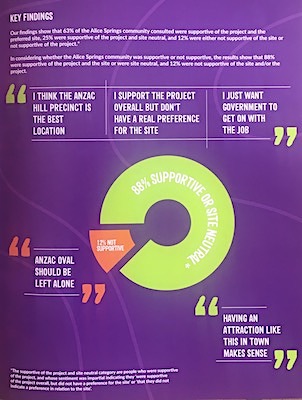 Independent Member for Araluen Robyn Lambley some two months ago asked the government how much was spent on advertising. She says she has yet to receive a reply.

The Advocate reporter’s question – is the government not just conducting a “slick marketing campaign” – might have been considered challenging if it hadn’t ignored the complicity of his own newspaper in putting marketing material, right down to its graphics, on the front page, which in most newspapers is dedicated to their own news reporting and analysis.

Oblivious, Ms Wakefield intoned: “There is a significant amount of support for the site within the community … bright and prosperous future for the town” and so on.

The reporter had had lots of time to ponder his question. The government gave the Advocate its propaganda – handed out to the other media yesterday – at least two days earlier so it could put together a “report”, have the paper printed in Darwin and transported to Alice Springs.

The reporter could have examined the message: “88% supportive or site neutral.”

The figure is utterly meaningless: The process is not even claimed to be a poll but rather “engagement”. Nonetheless it yielded a number – 88% support the Anzac Oval location or are neutral, meaning they support it or any other one. Dr Crees claimed that 56% were positively in favour Anzac Oval.

But those paying fleeting attention to the Advocate’s front page would have just noticed the big green circle with its percentage and said: “Done and dusted.”

It would have been worthwhile for the reporter to ruminate about the 755 people “engaging” with the government: The exercise was blatantly one of persuasion. People not wanting to be cajoled would quite probably have stayed away unless they simply liked the idea of a free coffee.

By contrast, in the council poll, which had 2029 respondents and has a 2% margin of error, people could say either Yes or No without being prevailed on to say Yes.

The council publishes its poll results – 58% positively against the Anzac location. Virtually the inverse of the government’s report.