Electric supercar at Henley on Todd 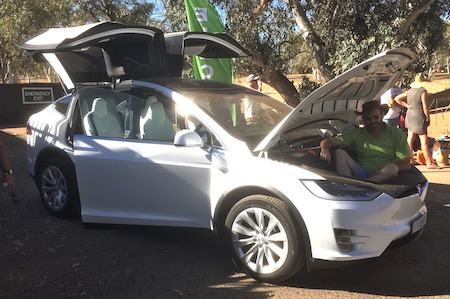 Next time you do a rellie rally to Sydney or Melbourne you can do it in an electric car: There are now powerpoints – called outlets – all the way and  90 of them in all around Australia.

It will follow the lines on the road, adjust its speed to the traffic ahead, read and obey the speed signs, note objects entering the road you’re on and if you ask it where the nearest Bunnings is, it will talk you through getting there.

Range and charging rate varies between cars/models as do 0-100 specs, says Greg Partridge (pictured), National President of the Australian Electric Vehicle Association (which is setting up a Territory branch).

He visited Alice Springs on the weekend, together with five other electric car drivers.

On the way they dropped off charging units at servos and road houses, so that a trip would unfold like this: You start with your batteries fully charged which provides four to five hours cruising.

When you stop for lunch at a road house equipped with a three-phase outlet, you give it a top-up for an hour or so, and perhaps another one in the afternoon.

Then you overnight at a caravan park or motel where your car gets a full charge again. Simple.

So how come Tesla shedded $5.4 billon when boss Elon Musk admitted job stress was getting to him?

Maybe a leisurely trip to the Henley on Todd next year is the answer.

PHOTO: The gull-wing Tesla X at the Henley on Todd. Mr Partrige is sitting where the engine goes in a normal car.