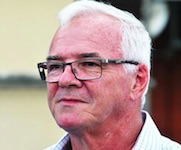 The police association (NTPA) is “appalled” by potential budget saving measures that have recently been leaked to the media, and by the gross failure by the NT Commissioner of Police to consult on this issue before it was made public.

NTPA president Paul McCue says in a media release: “This is nothing short of disgraceful and our hard working members deserve better.

“Pressure from this NT Labor Government, which seemingly continues to ignore the mounting pressure on our officers, is forcing Police Commissioner Reece Kershaw and his executive to make decisions that are putting crippling belt tightening measures ahead of the best interests of his employees.”

Meanwhile Opposition Leader Gary Higgins (pictured) says in a media release the government “has handcuffed the Territory’s hardworking police force at a time of unprecedented crime and community safety concerns.

“The Territory Labor government has got its priorities all wrong.

“The police need support, Territorians need to feel safe and not be subject to political waffle and cover up about savings and efficiencies.

“It is simply not acceptable to cut the budget, or the resources, including training, equipment and support to the Territory’s cops.

“It is imperative the Northern Territory offers the incentives to attract and retain our police on the beat in the Territory.

“I call on the Minister for Police to apologise to the Territory’s rank and file, and to reassure all Territorians that the Territory Police Force will not face cuts,” said Mr Higgins.


Mr McCue says: “It is baffling these proposed savings are being drafted, when the NTPA has not received formal correspondence from the commissioner or his department, for measures that would require significant industrial changes to the 2017 Consent Agreement, which was only finalised in February of this year.

“The NTPA will not allow the police department or this government to put a harsh ‘return to budget’ plan before what is necessary for supporting our members.”