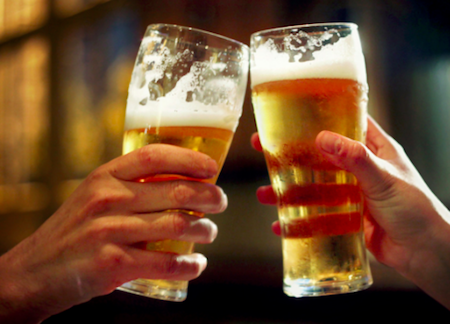 Beer drinkers are consuming moderate levels of alcohol compared to other beverages but doing a disproportionate amount of the heavy-lifting in filling government coffers.

The latest 2016-17 data on beer and taxes is sobering. Most people are not aware that they are slugged three times by the tax man when buying their beloved brews.

The first hit is the excise on beer. This is calculated on alcohol content. Despite beer being by far the lowest concentration of all alcohol products, beer excise netted the Australian Government the biggest return of $2.38 billion.

Not only does Australian beer excise rank among the highest in the world – despite per capita consumption of beer falling 60% over the last four decades – our excise automatically goes up every February and every August.

The second slug is GST on the excise. That’s right, consumers pay 10% tax on the tax. This reaped the Australian Government $238m.

The third whack is GST at the retail end. Be it at the bar or off-the-shelf, another 10% GST is paid on the wholesale price. We estimate that the Australian Government will pocket around $1.6 billion over 2016-17.

All told, that’s a tax trifecta worth a whopping $4.2 billion in just one year, just from beer.

Beer is the drink of moderation. It is the only alcohol category providing low- and mid-strength options for consumers to control their intake. Australians lead the world in their support for these beers accounting for a quarter (24%) of all Australian beer sales.

Yet, the absurdity of the Wine Equalisation Tax (WET) saw just $850m collected from wine in 2016-17. There has been no increase in the WET since it was introduced almost 20 years ago. In fact, the very minor category “other alcohol beverages” collected more in excise in 2016-17, at $923m, than the WET reaped from the entire wine industry.

Bizarrely, it’s beer drinkers who are paying the most in alcohol tax despite imbibing a fraction of the alcohol.

Typically, a full-strength beer at between 4.2% and 5% alcohol, volume for volume, is one-third the alcohol content of wine. It’s even less for low- and mid-strength beers, which now make-up one-quarter of all beer sales in Australia.

It makes no sense for Aussie beer drinkers to be footing the biggest alcohol tax bill. They’ve earned a reprieve for doing the right thing as responsible, moderate drinkers.

Serious excise reform that recognises beer’s unique place as the drink of moderation is possible, affordable and long overdue in Australia. The Brewers Association of Australia is currently examining a comprehensive raft of reform options to give beer drinkers the recognition and relief they deserve.