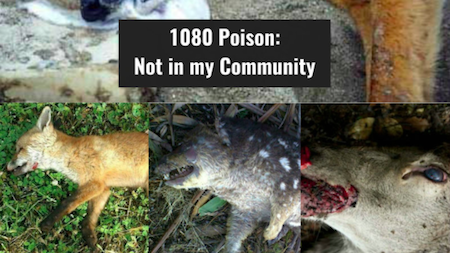 “It’s hard to imagine there is not a connection” between four dogs which had symptoms consistent with 1080 poisoning over about two months, including two last Sunday, says Debbie Osborne, of the Alice Springs Veterinary Hospital.

Three of them died.

Dr Osborne says no tests were made to confirm that the strictly controlled poison was present. It is normally used to control feral dogs on cattle stations.

The compound decomposes very quickly. The only way to do the test is to obtain the stomach content immediately and freeze it.

The symptoms are violent seizures.

The poisoned animals came from throughout the town, and so far there seems to be no location pattern.

One was poisoned on the Santa Teresa Road near the airport, and another, being walked in the Todd River.

The animal that was saved had to be given intensive care over a 24 hour period.

Police have told Dr Osborne that they could take action only if they received a complaint from a dog owner.

In 2014 four dogs were suspected to have been baited in Petrick and Chateau Roads.

In the 1970s and early ’80s dozens of dogs were baited in Alice Springs and the perpetrator was never found.

Meanwhile, the “Stop the use of 1080 poison campaign” in Menangle, NSW, (pictured at top) says 1080 is lethal and there is no antidote.

The campaign’s website states poisoned meat can be eaten by non-target animals such as lizards, snakes, birds, quolls, dingoes, dogs and cats.

“Animals can die of primary poisoning and secondary poisoning from eating the remains of other animals. This secondary baiting can go on for up to eight months.

“Baits and carcasses of baited animals can be moved by birds and other scavengers. Even if you do not agree to put bait on your property you will be affected.

“Death in some species can take up to two days during which time they will suffer seizures, vomitting, loss of bladder control and extreme distress.