Picnic Day is Hiroshima Day too 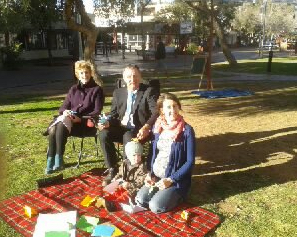 This year Hiroshima Day – August 6, the day in 1945 that the US dropped an atomic bomb on the Japanese city – coincides with the NT’s Picnic Day.

In Alice Springs it will be marked, as it has been  for the past three years, by three generations of a local family making peace cranes. Chris Hawke with his daughter Anneke and grandsons Eli and Oli will make peace cranes again and hang them in the pop-up peace garden on the Flynn Church lawns in Todd Mall.

Many children and adults will be making, displaying or giving away colourful peace cranes as an inspiring reminder of Sadako, the eleven-year-old school girl who died of radiation sickness ten years after the bomb was dropped on her hometown of Hiroshima.

They will also be celebrating the millions of things done by millions of people since 1945 to prevent nuclear weapons from being used again. These include the 2017 Nobel Peace Prize-winning Australians from the International Campaign to Abolish Nuclear Weapons (ICAN) who initiated the 2017 United Nations Treaty on the Prohibition of Nuclear Weapons. 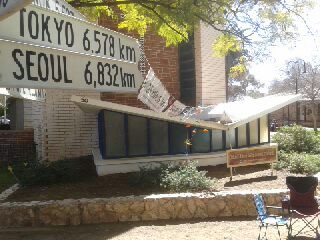 Everyone coming along is also invited to express their hopes and dreams or commitment to action on an A4 page to be part of the Alice Springs Nuclear Weapons Free Future Book for others to enjoy.

“Last year about 70 to 100 people, including children, were involved on making paper peace cranes over three hours,” recalls Chris Hawke. “One Japanese lady brought about 200 carefully folded cranes with her to place on the garden. She and her Japanese and Australian friends had spent many hours making them together.
“There were many smaller discussions and people reading the material we had and looking on with varying levels of connection and commitment to preventing nuclear weapons being used in future.

“We see it as a gentle and powerfully symbolic way of engaging the wider community in this very emotional topic.
“My hope is that in time this vigil will attract many more people than Anzac Day or Remembrance Day. Join our gentle family friendly vigil to commemorate, celebrate and commit to create a nuclear weapons free future with us in Todd Mall or do it wherever you are, with whoever you are with.”

On Monday evening Karina Lester, daughter of Yami Lester, a victim and survivor of nuclear tests, will be guest speaker at a Hiroshima Nagasaki Remembrance Dinner.

Ms Lester (pictured below) has also been heavily involved in ICAN and its role in highlighting the devastating humanitarian impact of any use of nuclear weapons as well its efforts to achieve a treaty-based prohibition on them, leading towards their total elimination. 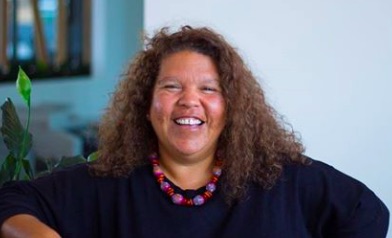 “But whether as acts of war or acts of ‘science’, the destruction and devastation that nuclear weapons have caused around the world remains clear in recent memory”, says Ms Lester.

The dinner, in recognition of the human devastation caused by the dropping of nuclear bombs on the people of Hiroshima and Nagasaki in August 1945, as well as the nuclear tests conducted by the British Government in Maralinga, South Australia in 1953, is being organised by the Alice Springs Peace Action Think Tank (ASPATT).

The impact of the tests in Central Australia had horrific environmental and health effects, including disability, on the Indigenous people living there – including Ms Karina Lester’s late father.

Ms Lester will speak on “Irati Wanti – The Poison Leave It!”, which will be the inaugural Yami Lester Address, covering her grandmother’s journey, her late father’s story and her own personal journey as a survivor of the nuclear tests in South Australia.

“It is critical that we work towards the elimination of all nuclear weapons,” says Ms Lester.

Jimmy Cocking, Director of the Arid Land Environment Centre and Town Councillor, will act as Master of Ceremonies for the evening.

The event, at Kungkas Can Cook from 6pm, (tickets $25) is open to all supporters of a future free of nuclear weapons, missiles and drone warfare.

‘Pine Gap hardwires us into any North Korea nuclear conflict’