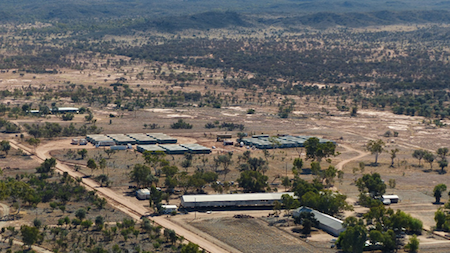 A rural resident protesting against more than 100 dongas plonked on nearby land at Ilparpa was told that the operator, NT Link owned by Tony Smith, was instructed more than a month ago to cease what he was doing. However, it’s business as usual on the 12 hectare site.

In an email dated June 18 the resident was told by the Development Consent Authority (DCA) it had “resolved to issue a Notice to Cease on the land owner/operator”.

Mr Smith is applying for a Development Permit for a “transport terminal” in White Gums.

An interstate based consultant acting for Mr Smith makes no bones in the application that it is “retrospective, as NT Link is currently utilising the site as a transport terminal for the storage of transportable buildings.

“The development of a ‘transport terminal’ is a discretionary use, comprising works requiring consent and a Development Permit is therefore required [under] the NT Planning Act.”

Meanwhile although misuse of land in the “farm areas” has been raised by residents for decades, and it is something Labor campaigned about while in Opposition. Now it has been in government for nearly two years and almost nothing has been done to fix the scandals.

In a hand-on-heart statement today the government committed to “improving the planning system to ensure it remains open, transparent and accountable, whilst also ensuring that the system listens to Territorians and gives confidence that the right planning decisions are being made”.

In fact a study commissioned last October is still in its early phase.

With an Orwellian title of the kind the government is so fond of –  “Building Confidence Through Better Planning – Review, Reframe, Renew” – the study has so far found that the NT Government land management is all but “open, transparent and accountable” in the view of a large section of the public.

Part Two of an opinion survey by an independent company has started today and will run till September.

This is what it has found so far:–

“The vast majority of Northern Territorians who participated in various consultation events generally distrust the planning system and decision making process, believe more meaningful participation should occur and there is too much political interference in the planning system.

“Participants particularly emphasised the need for planning system to be more transparent, inclusive and integrated … a need for information to be more accessible and clearer.

“Those who used the system more regularly commented on the need for an improved website connecting applicants to all relevant information, as well as making communication with service authorities easier.

“A high proportion of the respondents felt that there was insufficient enforcement of planning outcomes, and suggested more should be done to enforce the permits granted,” says the preliminary review, dated February 6, 2018 and released today.
There were mixed views on the review of the decision making process, in particular, regarding third party appeals [for people who are not the applicants].

“Many participants felt the current review system was adequate provided there was better communication and understanding of the planning process and outcomes.

“Others were of the view that third party appeal rights should be increased.

“Participants from the community consultation workshops, whether from local government or stakeholders / professionals who used the planning system extensively, acknowledged there are positive elements of the planning system but also suggested numerous improvements that could be made.

“Over 1,000 people within the Northern Territory were directly involved in the consultation, with additional residents reading the documents on the website.

“The consultation involved a broad spectrum of the community who had little to no experience with planning as well as those who used the planning system extensively and regularly.

“The vast majority of communities who participated in the consultation process were of the view that the planning system is not easily understandable and further that it is neither transparent nor provides significant meaningful participation.”

A report will be provided on the outcomes of the consultation process and recommendations in late 2018, with resultant actions to be delivered in 2019, says the government.

We are seeking comment from the NT Government and Mr Smith.