She lived where life is what you make it 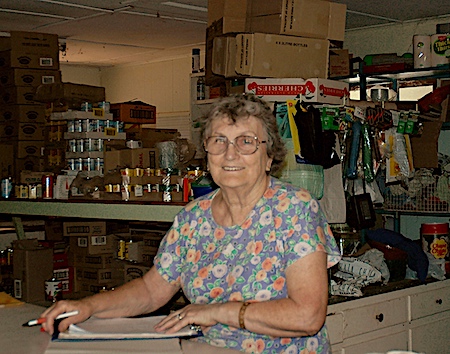 Joan Johannsen (at right), who passed away on June 24 aged 86, was a modern day pioneer, living and working with her husband Lindsay in extremely remote Bonya and Baikal, north-east of Alice Springs.

Sydney-born Mrs Johannsen, nee Killen, worked as a telephonist before becoming a nurse’s aide, both in Sydney, transferring to the Alice Springs hospital in 1952 where she married Alex Fletcher. They had three children, Margaret, Douglas and Adam.

In December 1961 she left Mr Fletcher and moved with the children to Adelaide, following which she married Lindsay Johannsen and had another child, Dominic.

In 1964 the family moved back to Alice Springs, where her fifth child, Taal, was born. There Lindsay took up driving his father Kurt’s road trains again, hauling cattle.

Kurt’s health was deteriorating, however, and in 1967, on his doctor’s advice, he retired.

But cattle hauling had become highly competitive and his World War Two trucks were aging, so instead of trying to continue with the business the family moved to Kurt’s mining leases at Jervois Range, about 400 km north east of Alice Springs. There they set up a small mining operation to take advantage of the day’s high copper prices.

By this time daughter Margaret was ready for high school, and so was enrolled at a boarding college in Charters Towers, north Queensland.

Joan, meanwhile, with the aid of a governess, set about managing Douglas and Adam’s School Of The Air education ‒ while at the same time handling all the bookwork and running the little store from which she provisioned their Aboriginal employees and families.

In June 1970 the mining leases were sold and the Johannsens had to vacate the Jervois premises. But they’d been going on weekend prospecting excursions in the nearby Bonya Hills and had discovered some encouraging tungsten occurrences.

So instead of returning to Alice Springs, Joan and Lindsay established a camp about 20 km south of the Jervois Mines to follow up these leads.

There, close by the Bonya Creek, they pegged a Mining Lease for Residential Purposes, under the terms of the old Mining Act.

In December the same year they discovered a larger, mineable tungsten deposit, now known as Molyhil Mine.

But it was situated on Jinka Station, 50 km east of their Bonya Creek campsite. By this time they had started building a little brick cottage there ‒ later named Baikal Homestead. As a result, packing up and moving to the new mine was not really an option.

This proved to be an advantage, however, because in 1978 the Molyhil leases were sold, and the homestead being separate meant not having to vacate their premises along with the sale.

Yet right from their arrival at Bonya others had influenced her life’s direction, for the local Aboriginal people had begun calling on Joan for provisions and fuel.

And while she’d managed a small store operation for their Jervois Mine employees there’d been no intention of continuing with it at their new location. 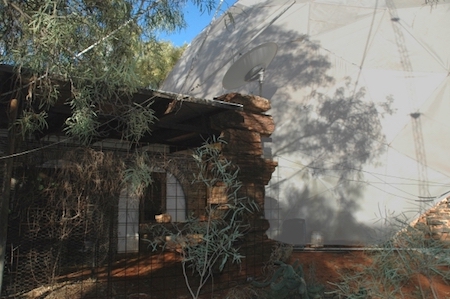 There’d been no option, however. People had begun settling nearby, on the other side of the Bonya Creek. And the fuel and food provided to them had to be replenished by making regular trips to town.

AT LEFT: The house in Baikal, 400 km north-east of Alice Springs. In the background is a radome Lindsay has bought from Pine Gap.

And so, within six months of moving to Baikal, Joan was providing basic requirements to 80 or so people, via the (then) Government rationing system. And her premises had been moved from the rear of their panelvan to a makeshift iron donga.

Later she shifted into a commercial-type shed with a cool room, and later again into a purpose-built transportable building assemblage.

These included looking after her new neighbours’ health and wellbeing ‒ especially the old people ‒ and diagnosing and dealing with the problems of sick children via Flying Doctor Radio.

On one occasion she delivered a baby; on another, when Lindsay was doing a store run to Alice Springs, she drove 160 km in drizzling rain and slippery bush roads to get a sick child and its mum to a serviceable airstrip before nightfall, and then had to drive home alone in the dark.

Yet the one thing of which Joan Johannsen was most proud, as her retirement approached, was the fact that she’d not had to evacuate a child with gastro from Bonya Community in sixteen years.

One of the main reasons for this was her steadfast refusal to sell disposable nappies ‒ only the washable cotton type ‒ as the disposable ones tended to be left lying around.

Another was hygiene; everyone was expected to come to the shop clean and respectable.

Joan also found herself acting as voluntary community advocate, trying to weasel funds out of various Territory and Federal Government Instrumentalities for the likes of corrugated iron, hammers and nails.
All she asked for was $5000 so that these people ‒ who at that time had no cash income and less personal possessions than fingers on their hands ‒ could build themselves the most basic of shelters.

And one day, when yet another well dressed young gentleman turned up from Canberra to knock on her door and ask her advice as to “what the Aboriginal people really need”. Instead of inviting him in for a cup of tea she let fly.

“If I had just half of the fares and travelling costs of all you people who’ve come out here from Darwin or Canberra or wherever to see what these people need, then they would already have their shelters!” was the general thrust of her broadside.

And, though taken aback, this particular young gentleman was quick to appreciate her point.

“If I were to give you a guarantee,” he said, “that within three weeks of my returning to Canberra you will have your money, would you invite me inside so we can discuss the matter further?” It was a blistering summers day.

And the fellow was as good as his word, and the money was deposited in a trust account Joan had set up in Alice Springs within the stated time.

Later Joan managed to organise the senior members of this group of very independently minded people into a Bonya Council, and was then able to have a square mile excised from the Jervois pastoral lease to formally establish their Bonya Aboriginal Community.

This made applying for community development funding easier, though getting it was still difficult because their population was too small and so fell outside official guidelines.

And then one day another Government bod came by and gave Joan a cheque for $200,000.

“This is to build the community a school,” he said, and explained how it was part of an NT / Federal Government initiative which included many other communities. And they’d chosen their representative well, for the fellow was one of that very rare breed of Government employee who just Got Things Done.

“But what sort of tendering process do you require,” Joan asked, “and building guidelines and contractual arrangements?”

“Tenders are not necessary,” she was informed. “And the type of building you choose and the suppliers and contractors you use are your own affair. Just build your school then send us the acquittal of finance details when it’s completed. Oh yes. And don’t come looking for more funding, as there won’t be any.”

So Joan took her ideas to a good friend in Alice Springs who could draft plans, then later took the plans to another friend who manufactured the type of structure she wanted at competitive prices and got a good deal.

Later again she found a young contractor who was willing to take on the building job.

Back at Bonya she asked the mothers as to where they would like the school to be built.

“Up on the hill,” they said, meaning the low rise behind the community. “Close enough for us to see the kids playing but too far for them to keep running back home all the time.”

Then a few years later some more Government bods turned up. And, Lo! They discovered a little community which had never received a dollar of planned and coordinated major funding ‒ when many Aboriginal communities had received these programmes end on end.

And soon graders and water trucks were going up and down and bitumen roads were being laid and brick houses were being built, with a generator shed and power lines and water reticulation ‒ and, in due course, a community office and store.

And Joan was mightily pleased because, after 40 years of managing and provisioning and tending and advising, she’d be able to close her shop’s doors for the last time then go across to the community store and do her own shopping.

In retirement Joan’s preference was to spend time travelling this wide brown land by road. But the question was, via what type of conveyance?

A comfortable car and friends, pubs and motels? A four-be and caravan? A WindyBagel motorhome? Or a decent sized bus with a four-be on a trailer.

“I don’t mind what it is,” Joan told Lindsay, “so long as it has no cooking facilities whatever and I can go down the back and have a good relaxing sleep while you’re driving.”

And so she agreed to a forty foot touring coach, with a shower and flush toilet and a queen sized bed down the back … and just a couple of little kitchen things, like a sink and a microwave oven. Oh yes, and an electric kettle for mugs of tea.

“Tar Baby” it was named, on account of Joan’s insistence that she’d had more that her fair-share of bush roads, thank you, and would like to stay firmly on the bitumen.

For 10 happy years the pair travelled, visiting kids and grandies, friends and rellies and seeing the sights … until Joan’s approaching dementia became pressing and they returned to Alice.

There Lindsay cared for her until no longer able to manage, and, in late December 2017, just before Christmas, Joan was taken into full time care at Old Timers nursing home.

And there, on Sunday June 24, 2018, at 5.45 in the evening, comforted by her daughter Margaret and with Lindsay holding one hand and a favourite family friend holding the other, Joan Florence Margaret slipped quietly away.