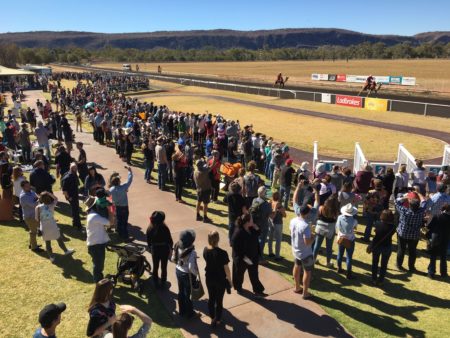 The mounts racing at the Alice Springs Turf Club today have humps.

This is not saying that the on-course morals of the Sport of Kings have deteriorated – it means it’s camels that are doing the running.

It’s the fifth venue for the Alice Springs Camel Cup since its inception in 1970 – the earlier being the Todd River (dry), Traeger Park, Arunga Park Speedway and the purpose-built course in Blatherskite Park.

The relocation seems to have worked well for the organisers since 2012, the Apex Club of Central Australia: There was a crowd of 5500, about half tourists, half locals, up on last year.

Will the Cup stay there?

Although this is not decided yet, the success of today’s event and the “big spend for one day a year” required at Blatherskite Park are likely to be factors, says chairman of the organising committee and vice-president of the club, Kyle Pearson.

Mr Pearson says the hilarious “sit down starts” where camels were “hushed down” for the riders to mount, and sprang up for the start, usually in a utter hilarious chaos, with handlers running for their lives to get out of the way, has been discontinued.

Mr Pearson says that is for reasons of safety. Also, standing starts have become the custom for camel races elsewhere in Australia, and rather than a circular course, today’s was just a 400 metre straight.

Race 3 (pictured), the Life Without Bumps Scramble, was not a close finish, with the fourth and last walking home in a casual pace.

The Cup had eight contenders, with Nuggett owned by Chris Hill from Uluru winning the trophy and the $5000 prize money.
The event is run by volunteers, 40 all up, 15 from Apex and the Rotary Club of Alice Springs helping out, in an exchange for assistance with their major annual event, the Henley of Todd in August.

The first Camel Race in Alice Springs was run in 1970 in the dry Todd River Bed as a bet between two mates, Noel Fullerton and Keith Mooney-Smith. The Lions Club turned it into an annual event in 1975.