Visions from the Centre to light up the Sydney Opera House 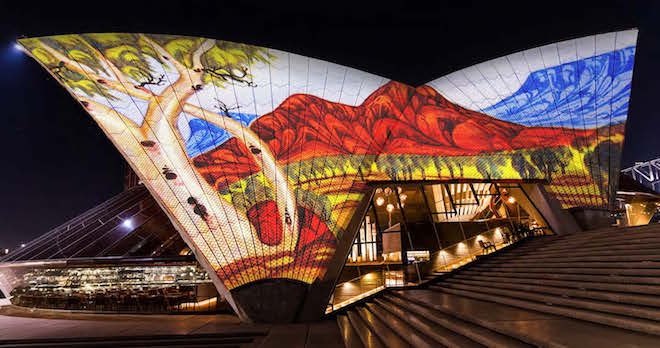 Two Central Australian Aboriginal artists are among six whose art work will light up the Sydney Opera House every night for the coming year.

Rubuntja learned to paint while living at Hermannsburg as a child, watching his uncles Maurice, Oscar and Keith Namatjira. His father, the late Wenten Rubuntja, a senior law man, was also an important role model, painting in both the Hermannsburg and ‘dotting’ styles (he called the latter ‘landrights’ paintings). He became the first Aboriginal member of the Australia Council for the Arts.

In Badu Gili Mervyn Rubuntja’s work (above)  depicts the way he sees the landscape in unpolluted light, using his signature strong clear colour to render the seasonal changes of the MacDonnell Ranges and the colour changes during the setting of the sun.

The recent artistic practice of Patricia Ansell Dodds, a member of the Stolen Generation, documents her initiation back into her community. Her work (below) depicts women, wild bush foods, ceremonies and the use of symbols. She currently leads walking tours in and around Alice Springs, sharing stories of the various locations visited.

This is the second iteration of the Badu Gili light installation at the Opera House, curated by their head of First Nations programming, Rhoda Roberts AO. Readers may remember that Roberts curated Parrtjima – A Festival in Light in Alice Springs last year. She will return to curate this year’s event with the theme ‘Cultural Freedom’.

Badu Gili means ‘water light’ in Gadigal, the language of the first people of the Sydney area. It celebrates the ancient stories and rich contemporary culture of Australia’s First Nations in a seven-minute animation, brought to life in collaboration with creative agency Yakkazoo and projected onto the Opera House’s eastern Bennelong sail year-round – twice each night, at sunset and 7pm, or 9pm during daylight saving.

Says Roberts: “Badu Gili 2018 once again re-imagines the diverse markings, sand ceremonies and symbols that guide us in the lore of country, sea and sky. Today’s technologies give new relevance and visibility to our ancient culture, allowing the world to understand and witness its power.”

Says Sydney Opera House CEO Louise Herron AM: “Bennelong Point, or Tubowgule as it was known to the local Gadigal people, has a long history as a special place of gathering, ceremony and storytelling, and we strive to carry on that legacy today. Badu Gili demonstrates the Opera House’s commitment to fostering and celebrating a shared sense of belonging for all Australians.”

The work will premiere on Tuesday 24 July at 6pm.

Meanwhile, Parrtjima this year will run from 28 September to 7 October, but next year will move to an earlier schedule in April, which will apparently “increase the potential for interstate and overseas visitation”.

The 2018 Festival will be the largest yet, including six light installations and projections onto the ranges, this year designed to reflect the cyclical patterns of the sun and the moon. It may also expand into the Alice Springs CBD. 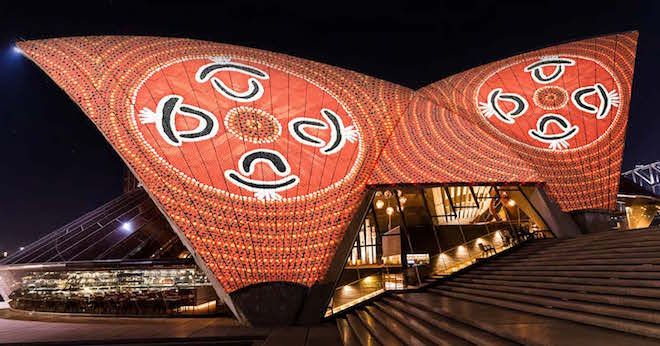