Home Issue 4 Flag on the Hill: When No became Yes
Issue 4Issue 5Volume 25

Flag on the Hill: When No became Yes 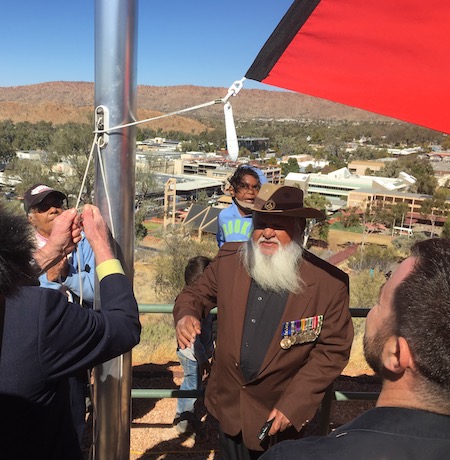 After 30 years of battles, some bitter and nasty, to have the Aboriginal flag fly on Anzac Hill, today – start of NAIDOC week – was the day for it to happen.

Councillor Catherine Satour, an Arrernte woman, was addressing several hundred people on top of the hill at noon today, under the brilliant blue sky and with a steady breeze that brings flags to life.

She recalled the Town Council meeting when the No became a Yes: “Right up to the final moment when we were going to vote, negotiations were happening between Councillor Eli Melky and Councillor Matt Paterson. And to my absolute delight he handed me a note to say he [Cr Paterson] had changed his position to support.”

“And we have a lot of work to do, especially in regards to reconciliation, issues concerning our youth, alcohol and family violence,” said Cr Satour. 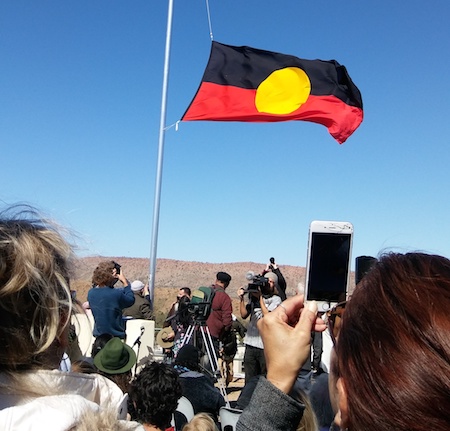 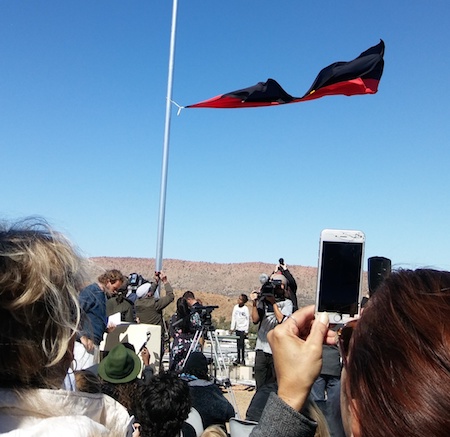 “Today we will have the three nationally recognised flags flying together and in unison on one of the most prominent hills in Alice Springs.”

And then Murphy’s Law kicked in.

Decorated Aboriginal ex-serviceman Geoff Shaw, a vocal defender of Aboriginal issues over decades, was pulling on the rope to hoist the flag up the brand-new pole.

It rose, spread out in the breeze to joyful applause – and dropped to the ground.

The crowd’s disappointment was palpable.

Cr Satour and Mr Shaw held the flag up – applause again – but all efforts to raise it failed.

It appeared the hook had snapped and moved to the very top of the pole. A cherrypicker would be needed, said a Norforce soldier who assisted with the ceremony.

The crowd moved off to the barbecue in the parking lot.

Cr Paterson took a philosophical view: After 30 years, what’s a couple of hours. 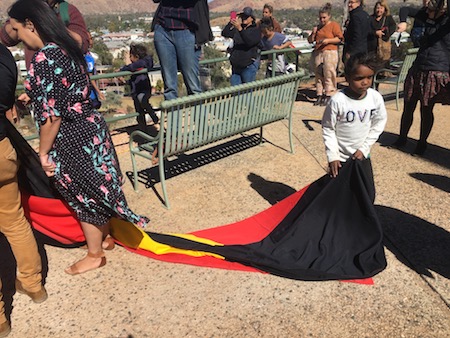 And that’s all it took. A cherrypicker was brought in and the job was done.

And Alice Springs history was made.

Second and third photo from top by Maya Cifali.