Multiple Finke winners Shannon and Ian Rentsch (pictured close to finish last year) will be starting first this morning, at 7.45am, in the car and buggy section of the Tatts Finke Desert Race.

Beau Robinson and Shane Hutt will get off a minute later, followed by Greg Gartner, Jamie Jennings and Mike Hannaford.

Toby Price, who is also competing in the bikes, is in the fourth grid position after the prologue yesterday, with Jason Duncan navigating.

Up to grid position 19 the cars will be starting one at a time, from position 20 they will depart in pairs.

There are 128 starters, the last two are scheduled to put the pedal to the metal at 8.45am.

In the bikes, Toby Price was fastest in the prologue. He and Ivan Long will be off first 11.45am, followed by Jacob Smith and Luke Hayes a minute later.

Up to grid position nine riders will start in pairs, from position 10 onwards in waves of 10 to cope with the 600 starters, the last ones getting away at 12.50pm.

For those watching the race live on the web from their lounge room – be that in Alice Springs, Vladivostok or New York – there will, for the first time, be footage from the southern end as well.

A satellite dish has been set up at Finke for the purpose, supplementing vision from the first and last few kilometres of the event, near the start / finish line in Alice Springs.

The images will also be shown on a big screen at the Alice start / finish line.

Some online shots of yesterday’s prologue was obscured by dust, and there was lots of advertising.

The prologue action was all within view of the cameras at the start / finish line in Alice Springs, which won’t be the case during the actual race, so there’s likely to be quite a bit of dead time in the streaming.

If this internet coverage further promotes the race world-wide it’s a good thing, but it’s unlikely to keep the battle hardened Finker from spending the weekend with mates along the track.

The Finke club is continuing to write the book on desert racing.

Its online race updating is exemplary.

The club is now experimenting with Rally Safe and other similar technology that uses GPS to pinpoint a vehicle anywhere on the track.

The gadget even has in impact sensing device that can automatically alert rescue personnel.

This year it is installed in some sweep vehicles but it will take some years to have it for all competitors, says a race official.

For the moment all competitors have a transponder that sends a signal to the checkpoints as they are passing them. This tells race control who’s gone through what checkpoint and when.

It also helps to locate overdue competitors between any two of the six checkpoints.

Operating where even satellite phones are patchy, the club has created its own seamless UHF relay system connecting all checkpoints with each-other and race control, as well as all sweep vehicles. 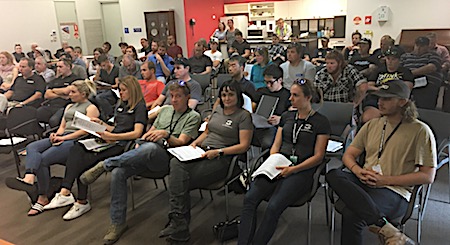 Four-wheel competitors and spectators are required to have UHF.

People along the track who have it can listen in on the radio traffic and are often the source of information about accidents.

Meanwhile media interest is again keen: 90 personnel are accredited, 24 from NSW, 18 Victoria, 25 from the NT, Queensland 9 and SA 10.

Two came from Japan and one from Spain.

PHOTOS: Vision streamed live on the web will also be on a big screen for the crowd • Part of the media corps at a briefing by race officials.