Home Issue 4 The millions and the misery
Issue 4Volume 25

The millions and the misery

Aboriginal organisations are likely to be challenged about their spending of tens of millions of dollars at the public meeting on Thursday, called to start a 24/7 Youth Club for the town’s most desperately poor children.

The project’s promoters, Steve Brown and Wayne Thompson, say the former Memo Club, at 127 Todd Street, is the ideal place for the club to be: It has a kitchen, dining rooms, indoor and outdoor areas for a variety of activities. There is space for bedrooms and the complex is at the edge of the CBD – not out of sight, out mind.

The land and building are owned by the Centrecorp Aboriginal Investment Corporation Pty Ltd as trustee for the Central Aboriginal Charitable Trust.

The Central Australian Aboriginal Congress health organisation wants to buy the land, not to bring kids as young as eight, roaming the streets at night, into a safe place, but “to bring non clinical programs occupying leased premises around Alice Springs together into one location providing Congress savings on a significant leasing cost”.

Congress is a shareholder in Centrecorp, together with Tangentyere and the Central Land Council.

Centrecorp as a Pty Ltd company has limited public disclosure obligations. It invests Aboriginal money in real estate and businesses, throughout the town and interstate. It has long been secretive about what it does with the wealth it has amassed, beyond some philanthropic distributions.

Congress by contrast is registered by the Registrar of Aboriginal and Torres Strait Islander Corporations (ORIC) and its finances are on the public record: In the year ending June 30, 2017 Congress had an income of $45m.

Its receipts from funding bodies amounted to $38.4m, including $30.4m from the Australian Government and $2.8m from the NT Government. 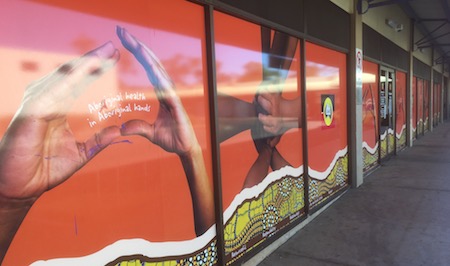 Unexpended grants included $905,740 for the Early Childhood Learning Centre; $82,158 for the Pre-school Readiness Program; $110,881 for the Intensive Family Support Service and $123,250 for the After Hours Youth Service.

Congress now runs four or five neighbourhood GP clinics – we asked for the exact number but didn’t get an answer – in addition to the town’s private clinics and the huge hospital where Aboriginal patients are disproportionally represented.

Yet neither the hospital nor other public instrumentalities spending huge amounts from the NT and Federal budgets on Indigenous health are getting any kudos from Congress CEO Donna Ah Chee: “Apart from the many significant accomplishments of Congress, if we had to point to one key indicator of the success that Congress has led it would be that Aboriginal infant mortality has reduced from around 200 per 1000 live births when Congress began in 1973 to about 7.5 per 1000 for Alice Springs on the latest data.”

Congress has 333 “full time equivalent” employees whose benefit expenses gobbled up the lion’s share of the budget, $32.5m, of which $28.4m was paid in salaries. That is an average salary of $85,285.

Congress on May 22 was put on notice from ORIC that it wants to “examine” its books and was told that “authorised officers are entitled, at all reasonable times, to full and free access to the books of the corporation and any related body corporate.

“The authorised officers are also entitled to seek explanations on any matter about the compilation of any of the corporation’s books, or to which any of the books relate.”

This came to the attention of the Alice Springs News Online today. We would have asked Congress CEO Donna Ah Chee (pictured) about it before publication, but as she has declined several recent requests for an interview that seemed futile.

All she said – in an email response to our request for interview on a range of matters – was that Congress has “previously described the work we are doing to strengthen families, reduce the harms of alcohol and promote healthy early childhood development all of which are key to preventing the problem of children on the streets”.

Both Mr Brown and Mr Thompson say the centre will be open to all kids, but the dramatic necessity is to provide immediate assistance to the unsupervised children on the streets late at night, some of whom are getting into, and causing, serious trouble.