Harts Range to Stuart Highway to be "all bitumen" 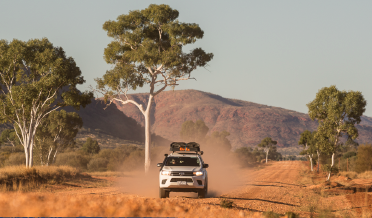 Nearly 20 kilometres of the Plenty Highway, which is part of the 2,800-kilometre Outback Way, is going to be sealed at a cost of $20m to the Federal Government, according to Senator Nigel Scullion.

Minister for Resources and Northern Australia Matthew Canavan says this is part of the Australian Government’s $170m commitment to the Outback Way.

NT Deputy Chief Minister Nicole Manison says the section would be constructed to a two-lane sealed standard, providing “a fully sealed connection between the community at Harts Range to the Stuart Highway”.

The contract for construction of the first package of works has been awarded to Exact Contracting Pty Ltd for $12.6m.

Minister for Infrastructure and Transport Michael McCormak says work on the Plenty Highway upgrade project is expected to be complete in early 2019, weather permitting.

“The project will seal 20 kilometres of the road to a two-lane seal.

“On completion, the section of the Plenty Highway between the Stuart Highway and Harts Range will be continuously sealed.

“The works will provide flood resilience and reduce the need for vehicle weight restrictions and road closure after heavy rainfall, which will improve access for Indigenous communities as well as the pastoral and tourism industries.”