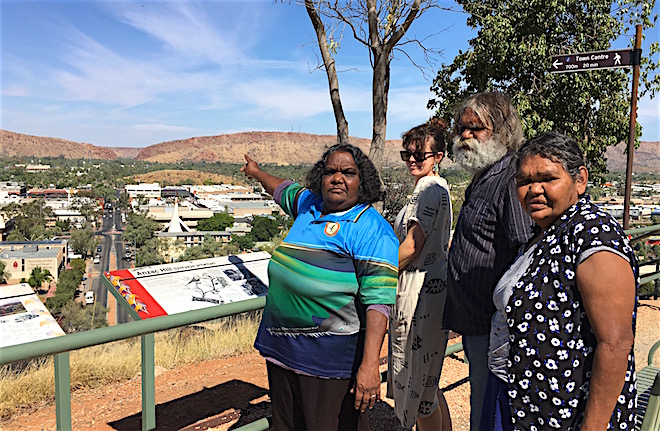 Above: Amelia Turner points to Ntaripe (The Gap). She is with some of the Apmere angkentye-kenhe team, Beth Sometimes, Mrs Turner’s husband Stephen Kernan, and Magdalene Marshall.

“The Land needs words. Otherwise, if we didn’t have language to speak with, we’d only have the thoughts that are inside our head. We’d have thoughts, but what good are they without the words to bring them out, so that we can tell each what those thoughts are, sing our songs, and tell our Stories? So the land needs words.”

Margaret Kemarre Turner, Iwenhe Tyerrtye – what it means to be an Aboriginal person (IAD Press), p. 194

The centre of town will be humming with the sound of its first language, when Apmere angkentye-kenhe kicks off for its second season next week.

The language of course is Arrernte, Alice Springs being on Mparntwe, homeland of Central Arrernte people and heartland of Arrernte country.

The name of the project, Apmere angkentye-kenhe, means ‘a place for language’. It had its first month-long manifestation last year with activities centred around the little yellow house at the back of the Uniting Church.

For many of those taking part it was their first exposure to listening and speaking in Arrernte, with 50 basic words to wrap their ears and tongues around. It was a chance to be with Arrernte people, the very best way to learn their language.

There were focussed language lessons in the shed, as well as a ‘No shame’ practice booth, a beautiful 3D map showing key sites around Mparntwe, with their Arrernte names and buttons to press for audio recordings teaching you how to pronounce those names. There were films and an audio guide for a walking tour through the centre of town, a way to begin to see it through Arrernte eyes, hear it through Arrernte place names and stories.

There was a community forum which brought together probably the biggest panel ever of Arrernte people reflecting on language, the loss language and its retrieval.

This year there’ll be all this and more, over two months. Building on last year’s 50-word vocabulary, there’ll be 30 phrases so learners can begin to talk in sentences. Example:

The phrases have been recorded by different Arrernte speakers and learners, to mimic the rich way that languages are learned in the real world through a variety of accents and speaking styles. These have been uploaded to sound cloud so that learners can listen over and over, at will. 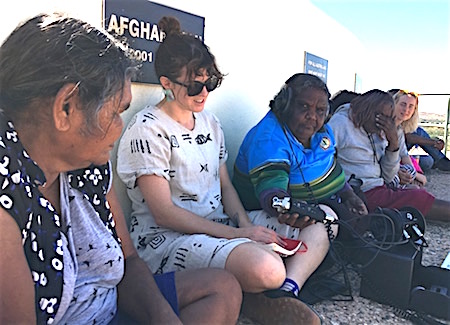 But the best way to learn is to be around people and listen, says Amelia Kngwarraye Turner. And this is the opportunity that the program of activities at the shed will offer.

Left: In the shade of the war memorial, the team listen to a binaural sound recording, using  to create 3D sound for their audio-guided walking tour.

Running alongside the open program, will be sessions specifically for Arrernte people, both for children and older people who for a range of reasons might not be fluent speakers.

The program will be launched on Thursday, 17 May, 6pm, with a smoking ceremony, dancing, a reflection on last year’s activities, and a welcome BBQ.

Meanwhile, the organisers, under the umbrella of the artist-run initiative Watch This Space,  are working on an audio guide for new tour of Mparntwe, taking as its starting point the view from the top of Atnelkentyarliweke (Anzac Hill). The guide will introduce you to more of Mparntwe’s important sites, such as Ntaripe (The Gap), and to the town camps by their Arrernte names: Anthelk Ewlpaye (Charles Creek), Ewyenper Atwatye (Hidden Valley), for example. And you’ll hear something about the meaning and history of those places for Arrernte people.

Apmere angkentye-kenhe is supported by Akeyluerre Healing Centre, Children’s Ground, Batchelor Institute; and funded in 2018 through Australia Council for the Arts and Live Alice Mparntwe: A Northern Territory Government program of free events.