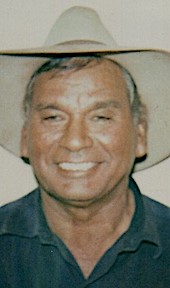 The thing I remember most about my brother-in-law, Tom Cleary, is his smile.

When he was born at Ambalindum, he must have inherited it from his dad, Thomas Cleary, the stockman,  or his mum Lucy, the East Arunta girl. Or perhaps, from both of them.

And Tom must have had a grin as wide as a cattle grid, each time he jockeyed his horse to the post, out at the Hartz Range Race meetings. He became a legend. No wonder they named one of the races after him.

Tom was always good on a horse. Whether it was moving some of Bennet Web’s big bullocks into Alice, or some of Kidman’s mob in from Huckita. In fact, when Billy Madrill, Kidman’s Huckita manager, named him head stockman, he must have had a grin you could drive through. Just 20 years old, he was one of the youngest ever to be given the title.

Tom Cleary knew a lot about cattle.  What he didn’t learn from hanging round Tom Hanlon’s stock-camps out at Jervois, he picked up working with Louis Bloomfield in the yards at Loves Creek , or droving mobs across the territory with Tom Williams.

I first met Tom when he and my sister Gaynor (pictured with Tom), came down south to get married in February  1963. 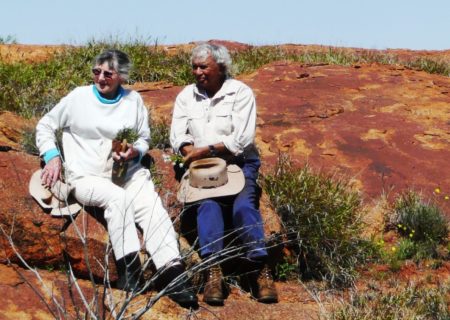 Those smiling white teeth were magnified by his dark skin, along with a shy but ready laugh  …  he was an easy guy to get to know. And it was smiles all round when John, then Arnna, arrived.

When the family came south for a break at Kimbolton, our cattle stud, Tom would spend hours talking cattle with my dad, Bill.

Bulls and breeds,
females and feed,
studs, floods,
markets, weeds,
stockyards, stock-agents,
prices, seasons,
and all the reasons why you work your cattle with horses.

Tom Cleary knew both his cattle, and his horses. In his mind, they were meant to work together.

“Those helicopters,” he used to say, pushing his Akubra off his brow, “they might have a place in the ranges, but out here, they just stir up your cattle.”

Another thing Tom liked to talk about was football. My twin brother Barry would rib him about his Kangaroos at North Melbourne, while trying to put in a good word for the Adelaide Crows.

Tom Cleary had a dream. He always wanted to be appointed as a station manager.  And what could be better than doing it in his Mum’s own area, at Atula, North of the Simpson.

“But hey, he’s illiterate,” some said.

In fact, they were wrong.  Sure, my brother-in-law was never taught to read and write, but when it came to breeding cattle, handling cattle and understanding the land and the seasons, Tom had a Masters degree.

And better than being on a piece of paper, it was in his head. His Shorthorns, Droughtmasters and Santa Gertrudis, bore testimony to that. And what he lacked in what city folks call literacy, Gaynor provided. 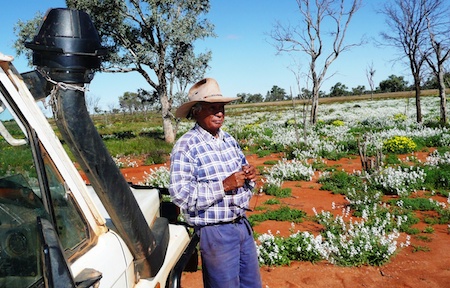 They made a great team. Tom with the run and the cattle and the stockmen and stockwomen, and Gaynor handling the paperwork, the records, the rainfall, the accounts and the phone, and all the other things good station women just get on with. In fact Tom credited his long life to Gaynor.

In his eighty ninth year he said to her: “Without you Gaynor, I would have been gone long ago. You were the reason I was able to drop the cigarettes and the beer, and you helped me to manage my medication.”

After working together on Mount Riddock, then with the Connellans at Narwietooma, on the West side, they moved back to Riddock, then on to Alcoota with Tom and Wendy Webb. Then they spent 25 of their 54 years of marriage, co-managing Atula.

I visited them out there in 2010. The ghost gums in the Sandover creek were looking so fresh. In fact everything was looking great. Lots of rain, good feed, fat cattle. Tom was smiling.

But as everyone knows, life is not all smiles.

Tom knew what it was like to go through some un-smiling times. Like when he was a kid in the hungry depression years out Jervois way.

He and Archie, his skin-brother, spent days hunting for bush tucker. To supplement the meagre rations. Then one day when he was about thirteen, a policeman arrived on his horse, along with is tracker, Jacky The Bull.

“Time you did something useful, Tom Cleary,” the Policeman announced. “You are coming with me. Louis Bloomfield over on Love’s Creek, needs a lad like you.”

Years later Gaynor talked to Tom about the removal. “Were you sad about that Tom? Were you frightened?”

“No, I was happy.,” Tom said. “I knew, at least, I would get a feed. Old Bloomfield was tough, really tough, and of course, I never got paid.

“But he was a great teacher, I learnt so much from him. And, even then, I knew there was no future staying in the camp.”

Yes, Tom understood the seasons. He knew that they change. Droughts will be broken by rain, and sooner or later that same drought will come, again. He knew that bushfires follow belly-high feed, and there is always the need to look ahead.

And as Tom drove me around the verdant Atula run, pointing out the native plants, purring with pride at the cattle, and talking about managing the red sands of Atula, I put this piece together in my mind.

Endless land
of grass-covered sand:
Woolly Oat and Buffel
Kerosene and Button.
The sand that made the Centre red
Is hidden by a bed of Paper Daisy,
Perfumed by Native Stock,
Punctuated by cheerful plumes of Spinifex,
And golden, Corkwood blooms.
Last year this was the dusty grave
Of un-trucked cows,
And ghostly calves too weak to draft,
While haughty camels,
through elevated jaws.
Browsed, and laughed.
But now, ALL  nature laughs,
Intoxicated by the clouds of rain,
And forgetting desiccating years of pain,
Ha Ha Ha. Haw Haw Haw,
Heartily guffaws.
On the Sandover and Plenty,
Pelicans and Swans
sweep long across seldom-seen lagoons.
Wood Ducks’ whistling wings, join Finches’ party tunes,
And busy budgerigars’ psychedelic throngs.
After browned out years,
parched despair,
Grit-grinding  debt,
And dust-choked air,
The post-drought growth seems obscenely green.
Welcomely obscene,
Emerald reality of a phantom dream.
No red between the Mulga, Bloodwood and Ghost-white  Gum …
But it will return,
It will come,
As sure as stormy summer fires will scorch and burn the run.
But we’re so thankful Lord, for the rains which soak,
And fill the dusty plains with two seasons at least,
Of laughter and hope,
for man and beast.

Later, when I shared this with Tom, he gave a knowing smile.

So, today, as you, his relatives, associates and friends, join Gaynor and John and Annna, we all salute Tom Cleary. A man deeply respected by both black and white, and those in-between.

Not bad for the bare-footed kid who, when on walkabout with his mother, carried Boozer, his cat, in a sugarbag  slung over his back.

Yes Tom, you were the quiet bloke, almost shy,  but ever ready with that flashing smile.

And that’s the way I will always remember you.

By Grant Lock who visited last week to spread the ashes of Mr Cleary at Huckitta Station.

Grant is also the author of two books which share his personal story. Shoot Me First. A cattleman in Taliban Country – 24 years in the hot-spots of Pakistan and Afghanistan.

And I’d Rather Be Blind. My life after Afghanistan.