'Our' gallery: Will Gunner, Ryan slay the dragon stealing it?

Don Quixote and Sancho Panza, aka Michael Gunner and Damien Ryan, had better saddle up Rosinante and head south: Those evil dragons across the border are STEALING OUR National Indigenous Art Gallery!

They are even calling it the National Aboriginal Art and Culture Gallery, to be built on the old Royal Adelaide Hospital site, nicknamed RAH. Rah, rah, rah!

On the way the Don will have lots of windmills to tilt at, between Port Pirie and Port Wakefield, while at home Dulcinea, aka Ms Wakefield, says she is taking charge – and by God, someone needs to because while we up here in La Mancha are having a nice old brawl over, well, almost everything, South Australia is galloping ahead at a pace Rosenante will have a job to match.

Today’s edition of the Adelaide online newspaper InDaily reports the pre-election pledge by then Opposition Leader Steven Marshall has become a post-election task for him as the Premier of SA. In fact the now Labor Opposition had made it clear it wants such a museum as well, as Cillín Perera reports in InDaily.

It describes him as a Harvard-educated Australian expat entrepreneur, philanthropist, photographer and art collector, a benefactor of the South Australian Museum and owner of nthspace (sic) Adelaide, surveying what has already been achieved south of the border. 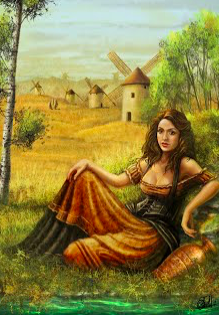 Mr Perera says the South Australian Museum (SAM) and the Art Gallery of South Australia (AGSA) will need to get together for “an unprecedented opportunity to create the world’s foremost institution for the telling of the complete story, from past to present, of an entire genre of art”.

He writes: “The vast majority of Aboriginal art as we know it is contemporary. Evolving from the first dot painting on durable materials created in the 1970s, this movement is now continent-wide.

“From the larrakitj and yidaki of northern Arnhem Land and the lino-cut prints of far north Queensland, to the urban art of the capital cities, the genre is as rich and varied as any in the world … four decades of Aboriginal art on the contemporary scene were a long 40,000 years in the making.

“An enormous breadth of this work is represented in AGSA’s storerooms, which contain more than 1500 works.

“SAM’s crown jewels of more than 30,000 artefacts, housed in a leaky industrial building at Netley, round out the story’s foundations.”

That would make Dulcinea green with envy because the Alice Springs variety of the “national” gallery has no collection at all to date, unless the intention is to raid the Museum and Art Gallery of the Northern Territory. Mention has been made, however, of partnerships and borrowings.

Mr Perera writes the gallery “can do all the good for Adelaide that MONA did for Hobart – but only if we hold bold in our vision”.

On that score Dulcinea is starting from scratch, except for the revitalisation of coffee shops in the Mall type of vision.

“Australia has yet to establish a national Aboriginal arts or cultural institution. Interest has been expressed in other states but the cornerstone of any gallery will be its collection, for which Adelaide has the strongest case,” writes Mr Perera.

Alice Springs doesn’t get a mention in the InDaily comment.

“A big part of SAM’s world-leading vision is to create an open-storage archive, empowering communities to access their culture, feeding the roots of the art movement, and setting a powerful example to the nation of repatriation and reconciliation.

“Such proposals don’t exist in a vacuum,” writes Mr Perera.

“Not only are we morally obliged as a nation to come to terms with Aboriginal reconciliation, but there are increasing pressures to acknowledge indigenous peoples globally.

“The potential flow-on from cultural tourism opportunities is more promising than ever. With worldwide tourist arrivals increasing 4-5%, the European Commission reports 40% of tourists choose destinations based on cultural offerings.

“This increased exposure also feeds the collector market, with a recent $2.1m Emily Kame Kngwarreye result and a dedicated Sothebys auction in London which this year forwent the customary Australian preview, deeming European interest sufficient,” according to Mr Perera.

That Emily Kame Kngwarreye, among many of the leading artists in the Aboriginal art movement, hail from the central deserts is not mentioned by InDaily.

It reports nine local and international arts and business experts have today been announced as the jury for the Adelaide Contemporary design competition, as shortlisted design teams tour the former Royal Adelaide Hospital site.

It publishes a supplied photo (at right) of the contemporary jurors and shortlisted architects outside the Art Gallery of South Australia.

InDaily reports the jury will be chaired by Michael Lynch from the Sydney Community Foundation and arts company Circa. It so happens Mr Lynch was also a member of the steering committee for the Alice Springs project, the committee whose advice was so rudely rebuffed the Don Quixote and Sancho Panza.

The InDaily report says Mr Mitzevich today confirmed the institute had endorsed Stage 2 of the competition: “Given the fact we had 525 architects from around the world – from both internationally and interstate – in 107 teams, it really shows that the competition has been well received by the industry.

It will be a while until Don Quixote and Sancho Panza get to Adelaide and how they will be stopping the dragon is still entirely unclear.