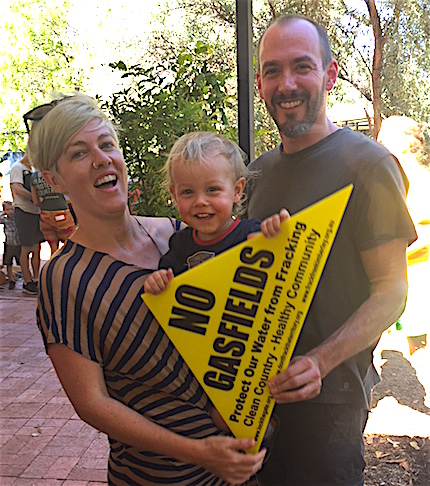 There’s no grass growing under the feet of Alex Kelly, director of the Something Somewhere Film Festival, despite the festival taking a break this year, hosting occasional screenings instead of a full program.

Winner of a Sidney Myer Fellowship in 2016 – worth $160,000 tax-free over two years, untied – the new mother could have been forgiven for taking a break to think about where to next.

Instead she went to that place, or rather those places: to Christmas Island (in spirit), as part of the production team for feature documentary, Island of the Hungry Ghosts, directed by Gabrielle Brady (ex PAW Media) and premiering in New York’s Tribeca Film Festival this week; and for six months to the ZAD in France, a 4000 acre zone of wetlands, forest and farms occupied for the last eight years by people wanting to defend it from development.

Alice Springs, which remains her home, hasn’t been forgotten: she’s worked here on the “impact team” for a feature documentary called Kids (working title), directed by Maya Newell. The impact role is all about making sure the film is seen and engaged with, that it creates the social impact that the film-makers seek. Kelly made her mark in impact producing with her work on Naomi Klein’s book about climate change and the documentary film of the same title, This Changes Everything.

Newell’s film, which is yet to be released, is about a local boy, Dujuan, a child-healer, a good hunter, who speaks two Indigenous languages but is ‘failing’ in school. With little space in the mainstream system for his language and culture, his grandmother Carol is fighting to give him a strong Arrernte education alongside his western education lest he become another statistic in juvenile detention or the welfare system.

The film’s ambition is to “creatively accentuate the strengths, the insights of Dujuan, his family, his community and through their story, First Nations families everywhere.”

It’s the kind of film that Something Somewhere specialised in over its first two years: a documentary coming from a different perspective, different voices, doing so with heart and with resonance for life in The Centre (in this instance utterly centred on that life).

The festival’s vision has not changed but the mode of delivery has, for at least this year. The team – Kelly together with  Matt Woodham and  Anneke Rose  – are instead hosting a number of screenings while they think about the festival’s future. The break has been influenced more by events in their own lives – Kelly’s son and a relocation to Tasmania for Woodham and Rose – than audience appetite for the festival, which achieved instant local success.

For their first occasional screening they’ve chosen the Oscar nominated documentary Strong Island (promotional image at right).
The film chronicles the arc of a family across history, geography and tragedy – from the racial segregation of the Jim Crow South to the promise of New York City; from the presumed safety of middle class suburbs, to the maelstrom of an unexpected, violent death. It is the story of the Ford family: Barbara Dunmore, William Ford and their three children and how their lives were shaped by the enduring shadow of race in America.

Kelly describes it as “a masterful film and has deep resonance with local issues of racial harmony here in Alice Springs.”