Can Jacinta Price sit in Town Council and Federal Parliament? 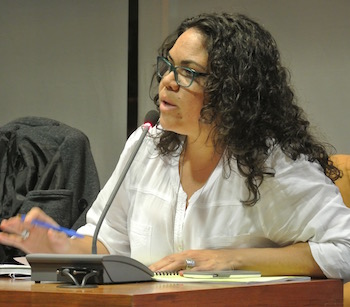 Can Councillor Jacinta Price (pictured), preselected by the Country Liberal Party for Lingiari, be a Member of the House of Representatives and an elected member of the Alice Springs Town Council and at the same time?

There is no certainty of that, say both the Town Council and the Federal Department of Attorney General.

Even ignoring the seemingly insurmountable logistics of serving one of the world’s biggest electorates, and attending regular sessions in locations 2500 km apart, this puts on shaky ground the idea she may wish to do both jobs.

It has been floated by Daniel Davis, a well-informed and frequent commentator in the readers’ comment section of the Alice Springs News Online, and with a background in conservative political activism.

The issue may lead to a vacancy that may be expensive to fill in the Town Council or the House of Representatives, and may raise the question whether the CLP, still reeling from its massive election defeat, can get anything right.

In all previous cases, when a sitting council member contested a seat in the NT Legislative Assembly or a Federal seat, that member resigned at the time the election was called, and if unsuccessful, had the option of being re-admitted to the council.

If elected, the resignation stood.

The AG Department, responding to the News, refers to the High Court decision in the case of Steven Martin, mayor and councillor of the Davenport City Council, seeking to replace Jacqui Lambie (pictured) in the Senate when her dual citizenship was found to disqualify her from being a member of the Federal Parliament.

Says the AG Department: “Whether holding an office of councillor in a local government would disqualify a person from being chosen or of sitting as a senator or member under section 44(iv) of the Constitution will depend on the circumstances of the matter, including the terms of the legislation establishing the office.”

And this is what Town Council solicitor Chris Turner emailed to council CEO Rex Mooney: “In relation to standing for election as a member of the Senate or House of Representatives, there is no provision in the Local Government Act disqualifying a serving Elected Member from doing so or indeed sitting as a senator or member of either of those Houses.

“However, in doing so that Elected Member may offend against the first limb of section 44(iv) of the Australian Constitution providing that any person who ‘holds any office of profit under the Crown’ shall be incapable of being chosen or of sitting as a senator or a member of the House of Representatives of the Commonwealth Parliament.

“There are arguments each way that a person holding the office of an elected member in a council does or does not ‘hold an office of profit under the Crown’. I have my own view on the matter but it is for the Elected Member concerned to seek their own legal advice,” wrote Mr Turner.

It may well be a lot more complicated than that. Would the council automatically accept legal advice which Cr Price may obtain?

Or would due diligence require that council seeks its own? And how much would that cost?

Should Cr Price find that she can’t sit in both places at the same time, how would she choose? Would a full time political role, appropriately salaried ($195,130 a year plus perks as an MHR) be the deciding factor? (Councillors are paid an allowance of $15,343.80 a year.)

The council must fill a vacancy occurring with more than 18 months to run till its next election, calling a by-election that may cost the ratepayers up to $100,000.

The council has a four year term meaning the next election will be by August 2021. That is at least 21 months from November 2, 2019, the deadline for the Federal poll.

The News has asked the council whether it will take any action about Cr Price’s candidature. Mayor Damien Ryan says he will be seeking advice from Territory and Federal sources.

This is how the AG Department backgrounds the issues:

“The High Court considered the question of whether Mr Steven Martin was incapable [of] being chosen or of sitting as a senator under section 44(iv) of the Constitution in Re Lambie [2018] HCA 6. Mr Martin held the offices of mayor and of councillor of Devonport City Council in Tasmania at the time of the 2016 election and the time of the High Court’s decision.

“Section 44(iv) provides that any person who ‘holds an office of profit under the Crown … shall be incapable of being chosen or of sitting as a senator or a member of the House of Representatives’. On 6 February 2018 the Court determined that Mr Martin was not disqualified under s 44(iv) and delivered its reasons for judgment on 14 March 2018.

“In reaching its decision the Court considered the nature of the offices of mayor and councillor under the Tasmanian Local Government Act 1993 and concluded that these were not offices of profit ‘under the Crown’,” the AG Department wrote to the News.