Counsel of despair: Strehlow on recognition of Customary Law 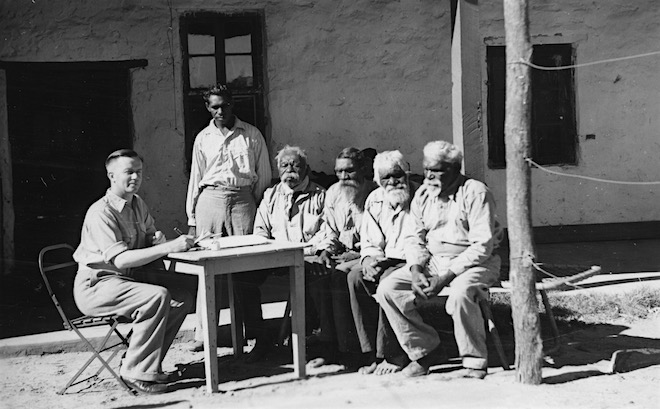 Above: TGH Strehlow, left, with the translation committee that worked with him on translating the New Testament. They are named in Barry Hill’s Broken Song as, from left, Conrad, Zachary’s, Jakobus, Nathaniel and Moses (Plate 43).  Image courtesy Strehlow Research Centre, MAGNT.

The following is an overview of a paper given during the recent symposium organised by Friends of the Strehlow Research Centre, “Reflecting on the Past, Making Tracks for the Future”. Mr Goldflam (pictured below left) is a senior lawyer with the Northern Territory Legal Aid Commission and is the immediate past president of the Criminal Lawyers Association of the Northern Territory (2011 – 2017). The full text of his paper can be found on the CLANT website here.

In a 2012 paper I quoted these chilling words from TGH Strehlow, words he penned in August 1978, just two months before his death:

Despite the white man’s welfare handouts, the old sense of security and intra-group human dignity appears to have been almost lost. The young men have become, it seems, virtually a lawless community, with all the horrors which that term implies. The old ‘law’ has lost its force, its remaining guardians can no longer control the younger generations; the new ‘white man’s law’ has not taken any real root among the young people either.

I cited this passage because it seemed to me then, as it does now, that it is as relevant ­– and as depressing – in our times as it was when Strehlow wrote it at the dawn of the era of land rights and self-determination, when he and his views were widely spurned and scorned.  As I concluded in my 2012 paper:

The young men Strehlow was writing about in 1978 are now old or gone, but their grandsons are today’s young men, filling our prisons to overflowing, and living the grim reality Strehlow inconveniently, insistently and unfashionably bore witness to. 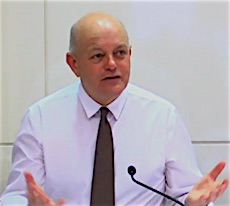 And ever since, those words of Strehlow’s have continued to haunt me.  I want to drill down a little into what Strehlow, who, perhaps more than anyone, had observed both whitefella law and blackfella law at close quarters, thought about their conjunction, and how he came to the position he reached.  I will argue that although he died swimming against the tide when it came to the turbulent issue of recognition of customary law, the tide has since turned, and Strehlow’s obdurately unfashionable views support an emerging new orthodoxy.  And finally, I will dip my toe in the gloomy waters of despair: Strehlow’s despair, and our own.

We are fortunate to have an authoritatively sympathetic account of TGH Strehlow’s views on the recognition of customary law, by former High Court Justice Michael Kirby. Before being made a judge, Kirby was the Chairman of the Australian Law Reform Commission which in February 1977 was given a Reference by the Commonwealth Attorney-General to inquire into the possible recognition of customary laws and punishments.

Kirby sought Strehlow’s counsel. Among the obstacles to recognition that  Strehlow raised were these: “There is no consensus of opinion among present-day aboriginals as to what ‘aboriginal customary law and practices’ once were”, and “True ‘tribal law’ is probably dead everywhere.”

Eventually, he emphatically answered the questions at the heart of the ALRC inquiry, in the negative:

It seems therefore that in another fifty years or so there will be no aboriginals at all whose beliefs, languages, or culture have remained relatively unaffected by ‘white’ ideas, concepts and values; and the original indigenous traditions in consequence are irretrievable [sic] on the way out… To attempt to set up two legal systems side by side would be a major mistake. More correctly, it would be an impossibility…

Since the 1986 ALRC Report, recognition of Indigenous customary law in relation to property rights, and in particular native title, has bloomed and flourished. In the criminal justice system, however, there has been no such progress. None of the ALRC’s modest recommendations for the reform of the criminal law in relation to either liability or sentencing were adopted.

It is remarkable that, forty years after being almost universally rejected, Strehlow’s opposition to the recognition of customary law, rooted as it was in both intensive observation and lived visceral experience, now closely reflects prevailing judicial and popular opinion.

The rehabilitation of Strehlow’s view is remarkable, but it is also deeply troubling. As Kirby and the ALRC pointed out, Strehlow’s counsel was one of despair. And that was because his advice was premised on the tragic belief that traditional Aboriginal religion, and hence traditional Aboriginal law, were dying. As Craig San Roque has observed, “It is an inconsolable loss to see the fabric of a society coming apart.”

However great the losses, we know now that neither traditional Aboriginal religion or law has died out. They continue to run and to adapt. Surely we owe to those people proud of their law, who refuse to succumb to despair, some systemic reform and political leadership. For a start, our lawmakers could do far worse than return to the ALRC’s thoughtful, measured and nuanced 1986 recommendations, which are firmly based on values of trust and genuinely cross-cultural communication.


Note: A detailed summary of the ALRC recommendations, including an outline of the scope for recognition and arguments for and against, can be found here.