Home Issue 2 Part of the town speaks, but will pollies listen?
Issue 2Volume 25

Part of the town speaks, but will pollies listen? 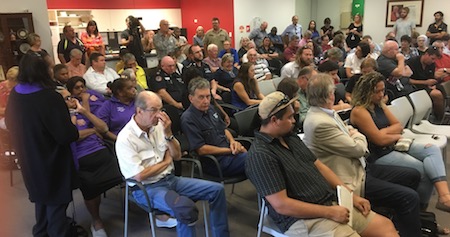 Public meetings are an Alice Springs ritual that is as enduring as it is futile, especially when it takes place at a time when people who have jobs are at work, and kids are at school, as it was the case yesterday morning.

Yet these talkfests keep happening, only for most of the passionately held views, usually well argued, to be blithely ignored by the high and mighty.

As speaker Gloria Hancock put it yesterday, answering her own rhetorical question, what have we achieved in almost half a century discussing alcohol abuse and crime? “Nothing, absolutely nothing.”

She was later booed by Aboriginal people in the room when she called for measures to reduce alcohol availability to Indigenous people.

The 120 retirees, public servants, politicins and NGO staffers packing the Andy McNeill room were invited by Senator and Federal Indigenous Affairs Minister Nigel Scullion to get it off their chests, again, especially about “kids who are mucking about, and there are a lot of them, engaged in anti-social behaviour, which puts them often in harm’s way … whether it’s the rock throwing and some of the other behaviour”.

This was a chance of addressing the four levels of government, said Senator Scullion (Commonwealth Government). 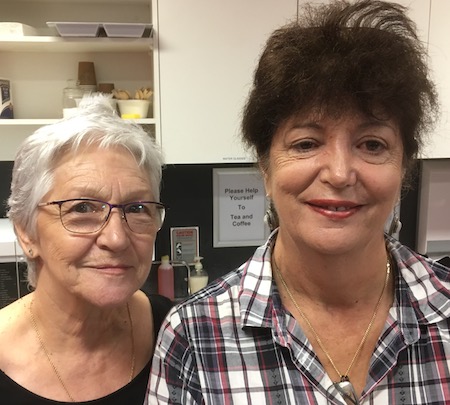 Four? He included the native title organisation Lhere Artepe, wracked by ongoing internal strife and not usually a prominent participant in public affairs, represented at the meeting by CEO Robert Campbell.

But far from giving an account of what they may have achieved for the public in the recent past, the four at the front table did a great deal of nodding and uttering bland assurances: “All working together towards a common goal … as a town” (Mr Campbell, suggesting the formation of yet another committee); “we need to get to the decision part” of all these conversations (Minister Wakefield); “yes, we can all work together … but it needs to be with the financial assistance of both the Territory and Federal governments” (Mayor Ryan).

Policing, especially “cops at bottleshops” (POSIs) came up throughout the meeting, plus bolstering manpower – public service and NGOs – for dealing with kids.

Minister Wakefield agreed – money has been doubled for staff including outreach workers and carers for kids on bail; there will be more licensing inspectors and cops.

Independent Member for Araluen Robyn Lambley said she is “sick of talking to Dale” as “the rivers of grog are flowing freely” as a consequence of POSIs being intermittent. It will take six months until the police auxiliaries will come on stream to man the POSIs.

Senator Scullion said he’d spoken to the Chief Minister, POSIs have had “a remarkable impact” and we need to hang on to them. This is “beyond politics”. In Tennant Creek the temporary absence of POSIs “had an immediate and direct effect”. 30 police officers sent to Tennant Creek will come back to Alice and there needs to be a “seamless transfer to police auxiliaries”.

Ms Wakefield: People in Tennant Creek claim restrictions do not go far enough. Four-litre casks are “coming in over the border”. Some licensees are not working within licence conditions. “We need to be brave enough to make the hard decisions.” She said a liquor licence costs $200 – less than a permit to be a social worker.

Donna Ah Chee and John Boffa, from Congress, were adamant that the POSIs must stay, without time gaps, which Dr Boffa termed “lock down”, in compliance with the Riley Report.

They argued that pulling police officers from POSI duty to deal with police business elsewhere is bad management of the cops’ time: Crime will increase if the POSIs are patchy.

Ms Ah Chee said there were 23 people in the hospital emergency department one recent morning, of whom 20 were “blind drunk”. Two were in the ICU with stab wounds. We are regaining the dubious reputation of being the stabbing capital of the world, she said, arguing – with Dr Boffa’s support – that the cops need to stay until the auxiliaries are ready to take over the POSIs.

Motorbike dealer Garth Thompson raised issues of compensation for business people suffering losses from anti-social and criminal behaviour, the high number of liquor outlets, the problems created by people moving into town from bush communities without the means to support themselves, and dry communities.

Minister Wakefield says the new Liquor Commission has an obligation to consult with communities and make decisions in accordance, and that can cover alcohol sales on communities. 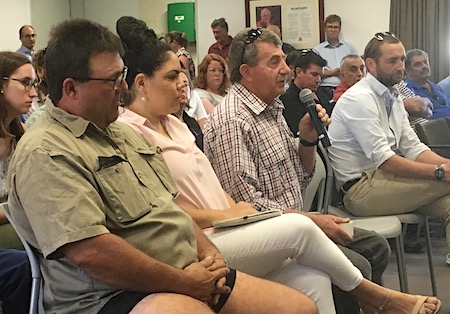 A speaker who did not give his name asked why Aborigines are regarded “not the same as us”. We are all answerable to the law of the land, he said, and everyone should be accountable for mistakes. He had seen council workers cleaning up “a sea of rubbish” in the Todd while Aboriginal people are watching, laughing. Litterers should be prosecuted and serve work orders.

Sharon Burns sought answers to her problems with occupants of renal houses in her street, demanding compensation for people whose homes are losing value as a result. She asked why she had no responses in the past from Senator Scullion and Minister Wakefield.

Activist Barbara Shaw lamented the “us and them” mentality and urged for night patrols to be extended past 2am, and the need for more Federal funding. 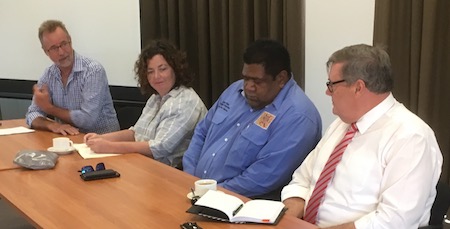 Mr Campbell said Lhere Artepe gets phone calls for help with combating anti-social behaviour but “the funding that comes into the NT compared to other states is minimal”. [ED – The per-capita receipt of Federal funding in the NT is about five times greater than the national average.]

Ms Wakefield repeatedly stressed the increase of youth work funding but acknowledged that the youth detention Royal commission had raised questions about how exactly the public funding is being spent.

Mayor Ryan said there is a need for re-visiting the codes of conduct for visitors to the town.

Christine Palmer Kngwarraye, a former resident of the Palmer Town Lease and currently writing a book, called on Lhere Artepe to hand back the liquor licenses of IGA stores it owns – notwithstanding the fact that Mr Campbell is a nephew of hers, she said. There was loud applause for her.

She said she could not send her kids to the stores. There is “spit, shit and piss” in parts of the town. Drug dealing is rife in her camp.

Mr Campbell replied the stores are “almost working at a loss” but surrendering the liquor licenses is “an option we need to discuss”.

Answered Senator Scullion: What about the other liquor sellers? “What about Woollies?” There is a consensus that less alcohol should be available.

Former alderman Samih Habib said it is wrong to blame alcohol: Kids have nowhere to go, there’s no-one looking after them. They sleep on the hospital lawns.

“We close bush schools and build jails. Shame on all of us.”

He said the Port Augusta solution, much discussed years ago, should be re-visited.

Senator Scullion said the kids living in the streets are a consequence of alcohol abuse, and he would seek a briefing on the Port Augusta solution.