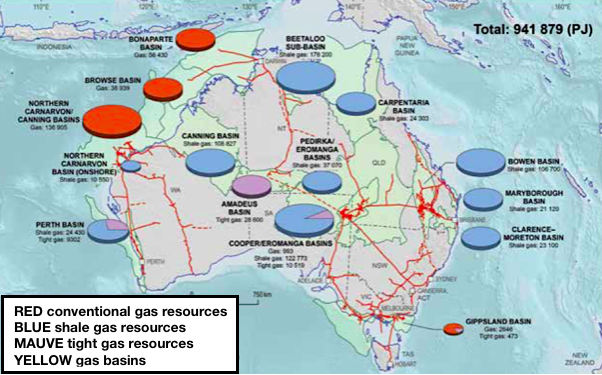 “No industry is completely without risk, and the development of any onshore shale gas industry in the NT is no exception,” says Justice Rachel Pepper, chair of the fracking enquiry which provided its its final report to the NT Government today.

“But having considered the latest and best-available scientific data from a wide range of sources, and noting the recent and continuing technological improvements in the extraction of onshore shale gas, the conclusion of this inquiry is that the challenges and risks associated with any onshore shale gas industry in the NT can be appropriately managed.”

This will require “among other things” –

• releasing land that is environmentally, socially and culturally appropriate;

• mandating world-leading engineering standards for the construction, maintenance and de-commissioning of all onshore shale gas wells and for the extraction of shale gas by hydraulic fracturing;

• the completion of a SREBA (strategic regional environmental and baseline assessment) before production to gather essential baseline data prior to any onshore shale gas industry being developed;

• insisting on a standalone comprehensive SIA for each onshore shale gas project;

• ensuring that traditional Aboriginal owners and Aboriginal communities are properly and comprehensively consulted about all aspects (positive and negative) of any onshore shale gas project on or a ecting their country;

• ensuring that the regulator is truly independent and that laws protecting the environment are properly enforced with succiently stringent sanctions for non-compliance;

• reforming the current regulatory framework governing onshore shale gas development in the NT to strengthen transparency and accountability of all decision-making;

• introducing full fee recovery to fund the necessary regulatory reforms and to ensure that strong oversight is maintained; and

• ensuring that all of the recommendations contained in this report are implemented in full.

Says the report: “Of course, nothing is guaranteed. And with any new industry, it is not uncommon for problems to emerge.

“However, it is the panel’s opinion that, provided that all of the recommendations made in this report are adopted and implemented in their entirety, not only should the risks associated with an onshore shale gas industry be minimised to an acceptable level, in some instances, they can be avoided altogether.”

The report concludes, as did the interim report, with an adaption – which many people have found offensive – of lines written by environmentalist Rachel Carson, author of Silent Spring: “In short, the panel is of the opinion that with the full enactment and implementation of the robust and rigorously enforced safeguards recommended in this report, the waters shall continue to flow ‘clear and cold out of the hills’ and the ‘dawn chorus of’ Magpie Geese, Brolgas, Budgerigars, Black Kites, Blue-winged Kookaburras ‘and scores of other bird voices’ shall continue to reverberate across the NT landscape.”

Judge Pepper says the final report “represents the culmination of 15 months’ of work by the inquiry, during which time the panel met 12 times; held 52 community forums, including 37 in regional and remote areas, and 15 in urban centres; conducted 151 public hearings; published 31 community updates; and received 1257 submissions.

The Central Australian Frack Free Alliance’s Jesse Hancock says in a media release: “While this report does acknowledge the limited water supply in this arid region, the recommendations do not firmly put Central Australia off limits for shale gas fracking exploration. Any risk to our water, is too much risk to take.”

Alice Springs nurse Barb Molanus quoted in the release says she does not feel this report truly reflects the concerns that were raised during consultation, while Mark Swindell, owner of Uluru Segway Tours, says the way to boost tourism is to ban fracking:  “I welcome the recommendation in regard to no go zones for areas of high tourism value, but it is not clear as to how these areas will be defined.

“Tourists come to the NT for its wilderness.”

Chief Minister Michael Gunner says in a media release: “We will now carefully consider the report’s recommendations and take as long as is needed to make the right decision for the Territory.

“Once the final report has been carefully considered we will do what we have always promised Territorians – either ban fracking in the Northern Territory or allow it in highly regulated circumstances in tightly prescribed areas.

“We will not put at risk existing fishing, farming, tourism and cattle jobs for the possibility of jobs from fracking.”

Opposition Leader Gary Higgins, says in a release: “The comprehensive body of work by Justice Pepper reinforces the opportunity that a well-regulated onshore gas industry presents to the Northern Territory.

“The final report found that any risks associated with onshore gas development and fracking can be managed by effective regulation and that it is now time for the Labor government to press ahead with lifting its moratorium.

“On the back of a 20 month delay, we would expect that exploration activity would commence this upcoming dry season.

“The report has debunked many of the scare campaigns around this issue and it is now imperative that the Labor government makes a decision to lift its moratorium,” said Mr Higgins.

NT communities will continue to advocate for a ban on fracking regardless of the recommendations from the final report, says the Arid Lands Environment Centre in a media release.

“We welcome the comprehensive detail [but] disagree that the myriad of risks exposed could ever be mitigated to an acceptable level.

“The inquiry has also recommended that the moratorium could be lifted without an implementation plan to mitigate the risks for the first three months – which would leave Territorians shouldering the risk.

“Implementing the recommendations in full is a huge task which would require a lot of time and resources, and allowing the moratorium to be lifted before an implementation plan is in place is not in the spirit of mitigating risk.


“Fracking the Territory would be a climate carbon bomb and we should not be heading down this path.”

“A ban on fracking is the best option for the Territory to reduce the risks. We urge the NT Government to take the precautionary principle seriously and maintain the moratorium.”

Lock the Gate says: “This report’s 135 recommendations and the serious information gaps identified, coupled with the increasing evidence of harm from fracking around the world, should be a wake up call to the NT Government that fracking is simply not worth the risk.

“The NT Government needs to extend the moratorium on exploration and production until all risks assessments and other studies have been completed, or take the next step and ban fracking permanently.

“First hand experience shared by the boom and bust onshore gas towns in QLD demonstrate communities were left worse off by the gas companies in the region.

“Many countries of the world have banned fracking in the interest of protecting their water and their existing industries.”