Council: Aboriginal flag will fly but not the art gallery 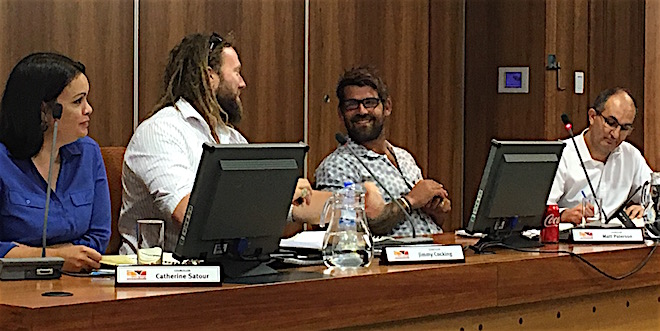 The two dominant issues – unsurprisingly – at last night’s Town Council general meeting were flying the Aboriginal flag on Anzac Hill and reaction to the NT Government’s announcement of Anzac Oval and the old high school as its preferred site for the National Indigenous Art Gallery.

The meeting decided the Aboriginal flag should fly alongside the Australian and Territory flags, on certain occasions, with Councillor Matt Paterson providing the circuit breaker.

But the gallery issue remained firmly undecided, with some councillors heaping scorn on the NT Government about inadequate consultation and rushing the decision. The council still has no position on the gallery but will now seek information from the government so it can formulate one.

All council members were in attendance although Councillors Jimmy Cocking and Jacinta Price participated via conference phone.

Given the current prominence of these contentious issues the lack of members of the public in attendance was noteworthy; however, there were a number of visitors of note including Member for Araluen, Robyn Lambley (a past alderman), ex-CLP minister Bess Price, and six former aldermen – Jane Clark, Meredith Campbell, Lynne Peterkin, David Koch, Samih Habib Bitar, and previous Mayor Fran Kilgariff, of which the latter four were presented pins for 10 years or more service to local government (David Koch quipped they had sufficient numbers to achieve a quorum).

The main business of the night commenced with a deputation by Kerrie LeRossignol passionately making the case for flying the Aboriginal flag on Anzac Hill.

Her presentation emphasised several points such as asserting the Aboriginal and Torres Strait Islander flags are legally recognised national flags since 1995.

She also rebutted an argument that Anzac Hill had been “dedicated” by traditional owners as a war memorial, stating there is no proof of any such occasion.

She stressed that flying the Aboriginal flag on Anzac Hill “is a right, not a privilege” and resented that Aboriginal people are forced to consult others to support their case, asserting some councillors “should be required to show proof as we have” but on their opposition to it.

Ms LeRossignol’s submission ended by posing two rhetorical questions – does the Council consider itself to have a greater authority than the Governor-General in refusing recognition of the Aboriginal flag; and also to have a greater “cultural authority” over TOs and their families?

These questions were “taken on notice.”

Later it was the turn of Councillor Catherine Satour to lead the debate, speaking against the loss of the motion at the previous committee meeting to fly the Aboriginal flag on Anzac Hill, restating her intention to amend current council policy to remove the word “only” for the Australian and NT flags so that the Aboriginal flag could also be raised there “in strict accordance with the rules.”

She recapped the chain of events over many years, including referencing the original CLC request of 1989 and the recent ABC report highlighting the flag’s designer Harold Thomas’ opinion.
Cr Satour tabled petitions and letters of support from various organisations, including from Lhere Artepe which she read out for the record.

She then reprised the support or opposition of her council colleagues except for Councillor Glen Auricht, whom she challenged had changed his opinion after a long phone discussion with her.
Following Cr Satour’s statement, all councillors reasserted their previous positions.

In Cr Auricht’s case, he acknowledged Cr Satour’s work and dedication, and the “overwhelming support” of many Aboriginal people including petitions and letters from organisations; however, he had read the entire list of names and observed that there were none from the relevant people who had ceremonial responsibility for Anzac Hill.

Cr Auricht pointed out that Anzac Hill is a key sacred site of a very long ceremonial story important to many language groups over many traditional estates. He questioned where is the support from “the keepers of the site” and on that basis refused to support Cr Satour.

Councillor Jacinta Price supported Cr Auricht’s position, and Deputy Mayor Jamie Debrenni stated that other suitable sites should be considered and was prepared to move a motion to that effect.

However, Councillor Eli Melky had raised a new perspective to the discussion when he stated Cr Satour was only proposing that the Aboriginal flag be raised on Anzac Hill for short durations, not 365 days a year – Cr Satour confirmed this to be the case, that the flag would be used for events such as NAIDOC Week or the like.

Councillors Marli Banks and Jimmy Cocking stated their preference to see the Aboriginal flag for the whole year, not just occasionally. Cr Banks declared there is a vacant footing for another mast on Anzac Hill and didn’t support another location “at this stage.”

Cr Cocking was more emphatic, specifically rejecting Akeyulerre (Billygoat Hill) as a site as, in his view, the Aboriginal flag would be “looked down upon” as seen from Anzac Hill and therefore regarded as inferior.

While Cr Satour had attempted to put pressure on Cr Auricht to change his mind, the twist to the discussion came from Councillor Matt Paterson.

Picking up on Cr Melky’s point about the flag flying for short durations, he proved to be the pivot on which this matter turned – he expressed his support for this arrangement and so the vote was won in Cr Satour’s favour.

The other major discussion centered around the NT Government’s announced preference for Anzac Oval and the old high school as the site for the National Indigenous Art Gallery.

There was appreciation that the Council-controlled Anzac Oval would be retained as a public space but there remained considerable uncertainty about what is actually being proposed.

Cr Melky began by calling for extensive community consultation to guide the Town Council’s policy towards this matter. Mayor Ryan advised this process needed to be initiated through the council’s committee processes before proceeding to public consultation.

Cr Debrenni turned this approach on its head, pointing out the council itself had not been consulted by the NT Government about this project and therefore questioned what did the council have to consult on? The council, he asserted, can’t go into public consultation without a position.

He was highly critical of the government, claiming the “NT Government has not handled this matter correctly” and questioned what are the cost implications for ratepayers? There are many unanswered questions.

Cr Melky, in broad agreement with Cr Debrenni, pointed out the NT Government had been urged “not to make a decision last Friday” (March 23).

Councillors expressed in principle support for the committee process to begin.

Councillor Cocking inquired “does the Council have a position on the National Indigenous Art Gallery and Cultural Centre” to which Mayor Ryan responded that “Council doesn’t have a position” and on that note the meeting ended.