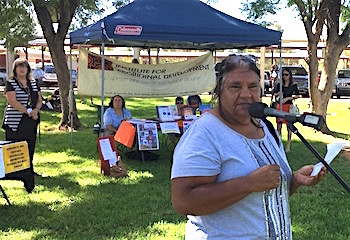 Arrernte women are continuing to work to raise their profile as a leadership group in Alice Springs. This year the Institute for Aboriginal Development Arrernte Women’s Elders Group joined with the newly formed Arrernte and Central Australian Aboriginal Strong Women’s Group to organise celebrations of International Women’s Day.

Planned as an outdoor gathering on the Town Council Lawns, the event was pushed into the following week by heavy rain on March 8. It was beautifully sunny on March 14  when Sabella Kngwarreye Turner (above left) welcomed, first in Arrernte then in English, a small crowd of mainly Aboriginal women, and women’s and youth services on behalf of the Central Arrernte native title holders of Alice Springs.

The day was about valuing, as strong women, “our culture and identity”, she said, but also about raising awareness “of our families and domestic violence in Australia”. It was about the “protection of our children” – stopping the family violence and closing the gap (between Indigenous and other Australians in many aspects of well-being). 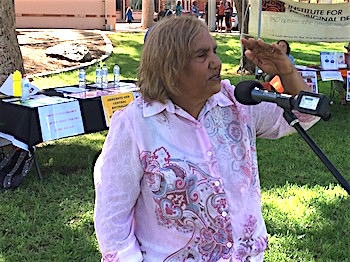 Christine Palmer (left) and Alison Furber from the Strong Women’s Group were gathering signatures for the petition to the Town Council about flying the Aboriginal flag on Anzac Hill.

Mrs Palmer recently returned from a visit to Canberra, where outside the High Court she observed the Aboriginal flag flying in the middle of other flags. She took that to mean a recognition, following the Court’s Mabo decision, that “they are operating on Aboriginal land”.

She didn’t speak about the Town Council but expressed anger that the Northern Territory Government flies its flag in Alice Springs while there is “nothing saying ‘Welcome to Mparnwte country’.”

She said Arrernte Elders fought hard for the removal of built structures  from their sacred sites. She wondered where that fight has gone, expressing her disgust and upset with all of the additional war memorialising now on Anzac Hill, a sacred site. 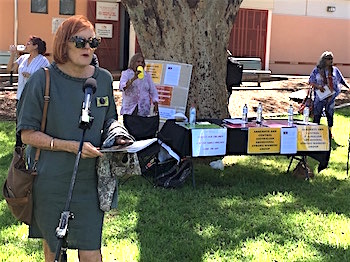 “Where are our leaders, people working together? Are we working together in this town?” she asked, urging Arrernte people to look to the strength of the kinship system, to be a “family once again”: “It is so hurtful to hear what is happening with our children running amok and the people of Alice Springs have fear of all these children.”

What is welfare doing? she also asked.

And to the broader population, harking back to to the flag petition,  she said, “Let’s start recognising you are operating on Aboriginal land.”

Jane Lloyd (above left) was the only representative from the NT Government speaking on the day. She works as Principal Advisor to the Department of Territory Families, and wanted to draw attention to the government’s recently released 10-year policy  framework for domestic, family and sexual violence.

She said its strong focus is on prevention and early intervention, mentioning particularly the importance of helping young people build healthy respectful relationships, to know and understand what consent means and exercise that consent in the relationships they have 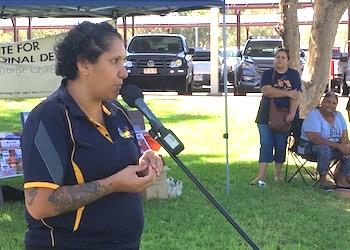 She said the youth activities part of the service will be combining with Tangentyere Council to work out of Brown Street by end of April – a good joining of services.

ASYASS also offers emergency accommodation and relief to young women, including young mothers, as well as to homeless youth and youth in crisis.
She said numbers of youth through the doors are “rising dramatically” – a lot of youth are clearly looking for space to hang out, to get something eat, get some rest and one-on-one engagement with workers.

To be able to keep helping the youth, she said it’s important for services to support one another. 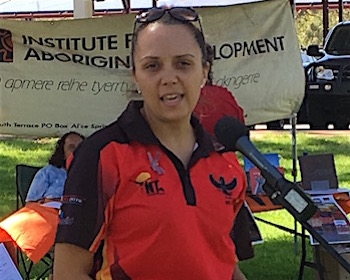 Sarah Carmody (left) is employed by Congress to work for the Redtails / Pinktails Right Track program.

Her focus is on getting more women and girls into sport, taking her message to high schools, primary schools, the juvenile detention centre.

The program sponsors a lot of football, netball, and soccer sporting clubs and also helps with employment and training.

Amelia Kngwarraye Turner (below left) spoke on behalf of Akeyulerre Inc, which offers support to Arrernte families in and around Alice Springs and is developing social enterprise. While funding cuts have limited what Akeyulerre is able to do at the moment, they remain committed to stopping family violence, she said, including on town camps; this is not limited to Arrernte people, but other language groups as well. 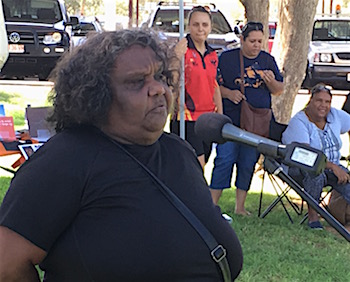 Phynea Clarke, CEO of the Central Australian Aboriginal Family Legal Unit (CAAFLU), drew attention to her service’s strong record of Aboriginal employment – 61% – in offering  culturally appropriate legal services, with an emphasis on prevention. As a “frontline service” they are faced with “pretty heavy stuff” on a daily basis, she said, but there are also “beautiful achievements in this community”.

Kerrie Le Rossignol, CEO of IAD and a key organiser of the event, spoke of the importance of education. IAD has operated since 1969, helping many thousands of Aboriginal people over that time, she said. In recent years they have faced drastic funding cuts, but are in a “very proactive” rebuilding phase, focussing particularly on raising levels of literacy and numeracy, as well as coordinating two Arrernte Elders groups, one for men, one for women.

*These statistics are quoted in the government’s policy  framework for domestic, family and sexual violence. 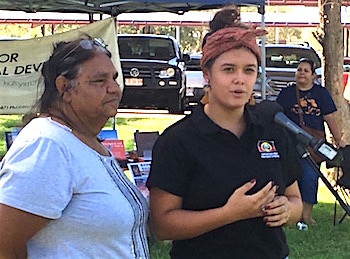 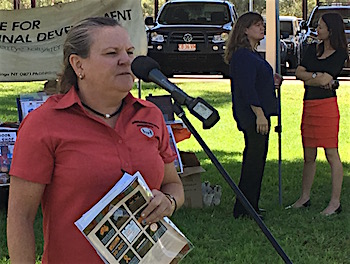 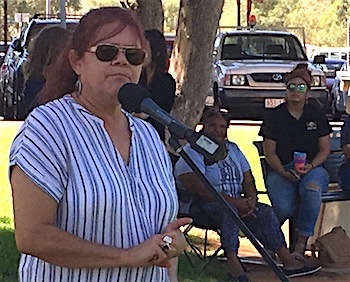 Sarah Carmody adding her hand print and message, “Black is beautiful”, to the painting for International Women’s Day by Elaine Campbell. 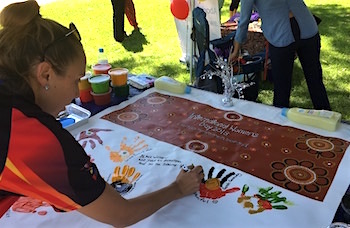