Above: Council chambers as last night’s meeting wound on. Rangers now escort councillors to and from the carpark.

When will Councillor Catherine Satour have answers about the January 29 incident when she says she was “verbally abused and threatened with violence by Councillor [Jacinta] Price’s family”?

She sent emails to CEO Rex Mooney four weeks ago and and has yet to receive a reply.

When will she get one, Cr Satour (below right) asked Mr Mooney at last might’s meeting. 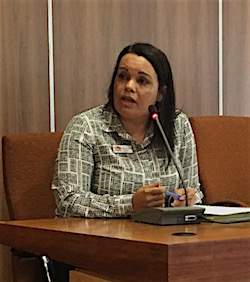 She said she comes to council feeling “anxious” although she appreciates that rangers now escort councillors between the carpark and the chamber.

Mr Mooney said he viewed her concerns “very seriously” and she would have a response on Wednesday.

Cr Price, who was attending the meeting by phone, asked to speak. She said the “accusations” concerning her family “have not been proven” and she did not think the meeting was “the right place to be making such statements”.

Mayor Damien Ryan, in the chair, said he was not aware of the content of Cr Satour’s emails which would be dealt with by the CEO.

Mr Mooney said he would be happy to discuss any issues Cr Price may have with her.

The January 29 incident was given coverage in the latest The Weekend Australian in a feature article about Cr Price’s ambition to enter the federal parliament.