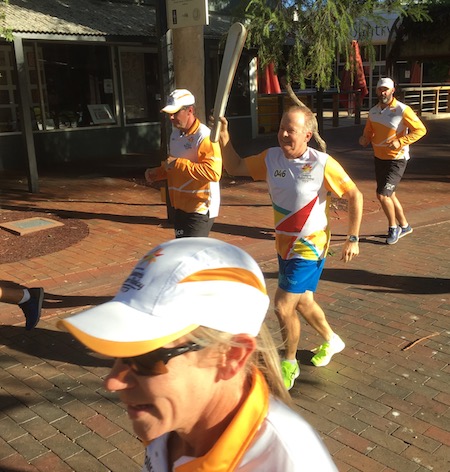 Greg Reval jogged up Todd Mall yesterday, flanked by police officers in their running gear, and carrying the Queen’s Baton on its way across the world to the opening of the 2018 Commonwealth Games in Brisbane.

“The baton carries a message from Her Majesty Queen Elizabeth II that calls the Commonwealth’s athletes to come together in peaceful and friendly competition,” say the organisers.

The relay will be “the longest and the most accessible ever, not just passing through, but spending quality time in each community it visits”.

It’s been on its way for 352 days so far, Mayor Damien Ryan told a crowd of about 200 at a small ceremony in the Mall.

Runners are criss-crossing the town with it today, with 21 participants following a precisely timed route.


From Alice Springs the baton will be heading north.