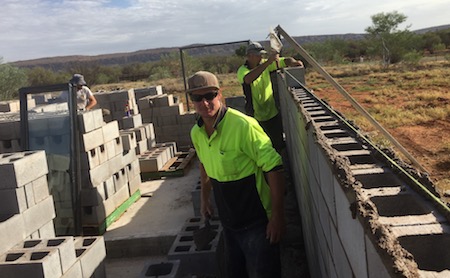 If you’re beginning to find the heat unbearable, maybe working as a brickie could bring you relief.

“It’s good. Wouldn’t have it any other way,” says Curtis Brown (front in the photo) who is laying 16 kg concrete blocks building a house on Schaber Road.

The team was working in 43 degrees yesterday – that was shade temperature, of course. Add another five for being out in the full sun.

“It’s all right,” says Mr Brown. “I’m from Vic originally, it takes a bit of getting used to when you first come up.”

“At least we don’t have the humidity. It’s just a dry heat. We’ve done a lot of work in Katherine. That’s bad.”

“Should get in about 700 in today, I reckon. We’re lifting about three or four tonnes a day each.”

He has a point about humidity. Yesterday it was 15%, says the met bureau.

Reliative humidity is measured by the amount of moisture in the air, with 100% reached when the air can’t take any more.

There will be some relief on Sun with 35 degrees the maximum.