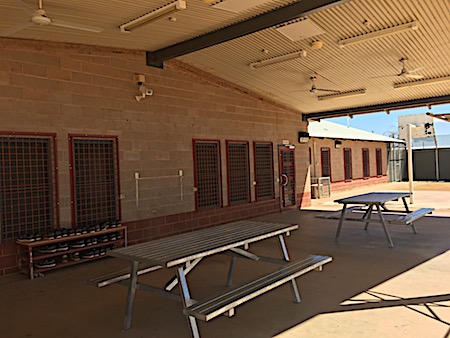 The government prefers the Desert Knowledge precinct as a site for a new youth detention centre in Alice Springs, according to a media release from Families Minister Dale Wakefield.

This would offer the potential for local Aboriginal NGOs “to be a part of the new model which supports young people by focusing on culture and connectedness to family, along with education and training, while leveraging the expertise available at the Desert Knowledge Precinct”.

Talks with the precinct are under way.

Ms Wakefield says the current youth detention centre is not fit for purpose although it is currently undergoing a $1m plus refurbishment.

Ms Wakefield said the government has already announced $50m to respond to the Royal Commission recommendation in addition to the $20m already allocated.  She called on the Commonwealth Government to do them same “after they announced they will not put in $1 extra”.

She says: “We are taking action to fix the problems highlighted in the report while the Australian Government has walked away and is all talk and no action.

“CLP President and Senator Nigel Scullion and CLP Leader Gary Higgins have backed Canberra and are telling them not to help. They have walked away from the Territory’s most vulnerable and at-risk children – it’s shameful.”

PHOTO: Part of the current facility adjacent to the adult prison.