Emily's work takes to the skies 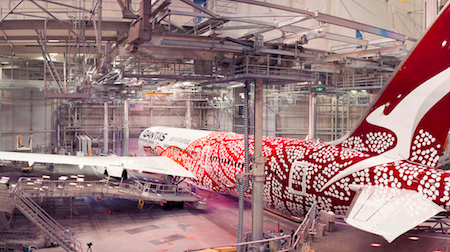 A livery based on a work of world-renowned Central Australian artist Emily Kame Kngwarreye (below, right) adorns the latest Boeing 787-9 Dreamliner of Qantas.

It will touch down in Alice Springs on March 2 during its delivery flight direct from Seattle. It will be welcomed by Mrs Kngwarreye’s family.

Qantas says the livery is based on the Utopia painter’s 1991 work, Yam Dreaming, and has been adapted for the aircraft by the Sydney based design studio Balarinji.

Qantas Group CEO Alan Joyce says in a media release: “The striking artwork is intended to encourage more people to explore the Indigenous elements that form part of ‘the Spirit of Australia’.”

For only the second time in Qantas’s history the iconic flying kangaroo on the aircraft tail has been changed to form part of the design.

After the visit to Alice the aircraft will fly to Sydney and Melbourne for crew familiarisation flights on Qantas’s domestic network before it enters service on international routes from late March.