Lifting the curtain on local lives and memories 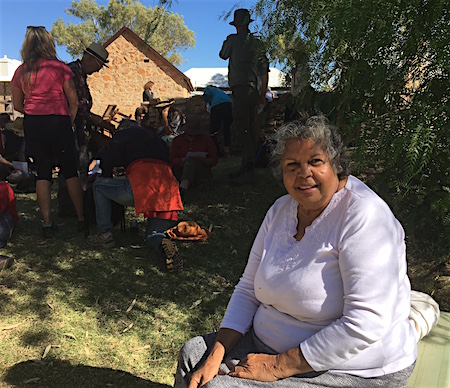 Unknown or little known stories of this place will be the focus of two “live arts” programs intended to generate interest around the centre of town over the coming months.

Senior Arrernte woman Patricia Ansell Dodds (right, at the Telegraph Station, photo from our archive), together with Amelia Turner and Carol Turner, will give visitors and interested locals insight into the survival of Arrernte people, culture and landscape, through painting and story-telling. The interactions will be personal and hands on, with visitors invited to watch, learn and turn their hands to painting in the Arrernte style.

Story-telling is also at the heart of the second project, titled “Local Knowledge”, the brainchild of community artist Kelly Lee Hickey. She is seeking out the unsuspected stories of place, drawn from the personal experience that locals may have of particular sites. The stories will be produced as 16 short texts on the verso of a beautiful map showing their locality.

Both projects will go towards filling gaps in the information and understanding about this place that is available to visitors, pushing beyond the clichés.

Mrs Ansell Dodds notes that much of the Aboriginal art to which visitors are exposed in Alice Springs actually comes from other desert peoples; it is not by Central Arrernte artists who are the local traditional owners.

“We want to show people that Arrernte culture is still here,” she says. “We haven’t lost it and most people have retained their language.”

Her own family were subject to child removal practices over three generations, which has led to a degree of language loss, but she is proud to nonetheless be able to follow quite a bit.

She sees the project as important not only for non-Aboriginal people but for Arrernte youth: “They know who they are, Aboriginal people in Central Australia are very strong in culture” but it will be good for them to see their stories being acknowledged by others.

Kicking off in April, the project will run over three months, five days a week (venue to be confirmed). 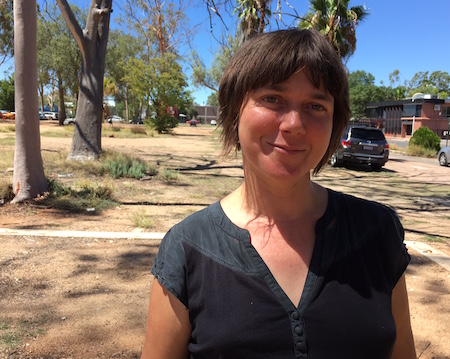 Ms Hickey (left, on the old Melanka site) is already putting out feelers for contributors to her project, which she describes as a “multi-voiced reading of places and spaces”.

She wants to ensure a broad spread, from Aboriginal and non-Aboriginal people, from long-time locals and more recent arrivals. She mentions, by way of example, the local Indian community’s exuberant enjoyment of Bollywood movies screening at the Alice Springs Cinemas.

Her inspiration for the project came from experiencing walking tours during recent travels in Europe – not that she wants to emulate them, rather she wants to do what they mostly failed to do. The exception came during a tour of the Jewish Quarter of Cracow, Poland where the whole experience came to life thanks to a man in the group being able to recount his personal memories of life on a particular street.

“For a moment it was like a curtain had been pulled back and we caught a glimpse through the window,” she says.

“That’s what I want to do with the Local Knowledge map, pull the curtain back.”

This will be just as interesting and important for locals as for visitors, she suggests:

“It’s easy live in our little bubbles in Alice Springs. You can see from the community forum [on Facebook] how segregated the town can be.

“These stories of place will show what we share, how we co-exist.”

There will be a number of versions of the map, all beautifully designed by Elliat Rich and printed on high grade paper (Ms Hickey describes herself as “a paper nerd”). There will be folded A3 sheets that people will be able to carry with them and cherish as a memento; large A1 public art poster maps will be displayed around town; and she is looking at how to make pdf versions available online.

To launch the map, Ms Hickey will conduct three guided walking tours that follow the trail of its stories. This will be during the month of May; thereafter the map will be there to support self-guided tours.


Note: These are two projects, auspiced by Red Hot Arts, out of nine recently funded in a  second round of grants for the Territory government’s Live Alice Mparntwe Arts. Story Wall, funded in the first round, is ongoing.

Other projects to look forward are: