Architecture – with a side of red dirt 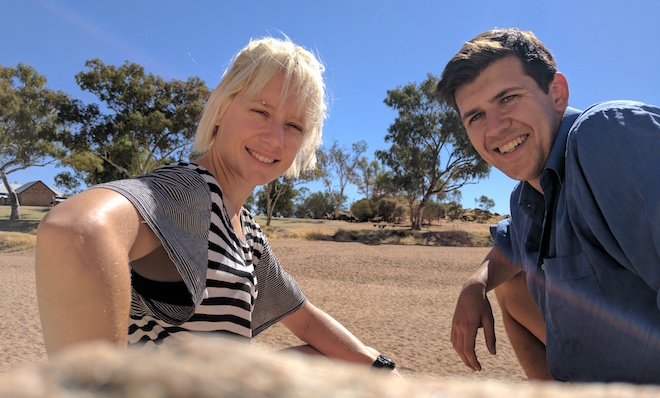 Above: Bobbie Bayley and Owen Kelly in the river at the Old Telegraph Station, Alice Springs in July.

Remember the architecture students who came through Alice in July on their coast-to-coast cycling trip across the country? They were seeking to better understand how Australians respond to their environment through what they build. Well, they made it. Ten months after leaving Fraser Island and 7650kms later, they reached the Indian Ocean, with a wealth of experience and reflection under their belts. The journey has opened their eyes on the opportunities of architecture outside of the big cities and designing houses for the rich. Alice Springs News Online asked them for an overview.


By OWEN KELLY and BOBBIE BAYLEY

Architecture in Australia is normally associated with its cities and with the 85% of Australians who live within 50kms of the coast. Undoubtedly this is where you will find the capital “A” Architecture attainable only for a select few. Colonial constructs in stone and classical order, as well as the new-age, pseudo-Australian mongrel designs that seem to adhere to no doctrine beyond that of the designer’s own.

As an architecture student you exist within this new architecture, wrapped up in layers of assumptions, optimism, and powerful individuals who are revered like gods. Cities and urban settings are the problem to which you are told to apply your creative and critical thinking.

Yet, there is a little part of you that wonders, what’s beyond these limits? What if you caught the 110 bus to the last stop and just kept walking? 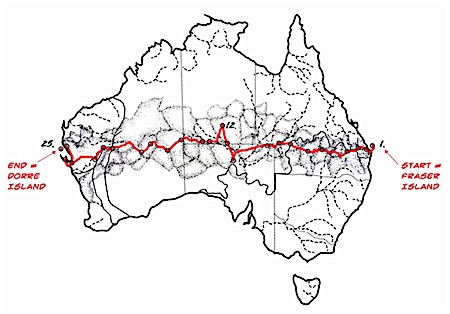 For us the wondering became too much. We have just ridden bicycles meandering along Latitude 25, the datum of Uluru, from east to west, Fraser Island to Carnarvon, in a heartfelt attempt to better understand our own country.

Left: The ‘plan’ to cross Australia on bicycles looks like a heart monitor, luckily for us it … The actual route looks a little different.

Stepping outside of the institution, challenging the doctrine, taking cues from historical ‘radical’ journeys and championing slowness to investigate our own country: this was our solution to what is a mammoth gap between the education and practice of architecture, theory and actual buildings.

We called this trip “The Grand Section”, the name partly stolen from the rite of passage undertaken by English architects who from the 16th to 19th centuries went on The Grand Tour around Europe, studying classical buildings and ruins. And stolen partly from a ‘section’ – a powerful architectural drawing that shows the interrelationships between a building, its people, spaces and the environment. By taking the “TOUR-ist” out we were able to look at things in a little more depth, so The Grand Section was born.

We chose Latitude 25 because we saw it as the cultural heart line of the country, taking us through Uluru. This dictated our route instead of allowing it to be dictated by our preconceptions as to where ‘good architecture’ is. We wanted to look at the reality of the country, not reinforce our own ideas.

We took 10 months to cycle across the continent. Not because we are mad keen cyclists (we swear we didn’t wear lycra) but because we wanted to move slowly through country, having no intermediaries to impinge on experience. Allowing ourselves time to see, think and process the landscape, people and buildings around us. Something hard to do with the fast-paced nature of deadlines. This has been one of our best teachers yet.

Over the course of the 10 months we had 21 one week ‘stops’ along Latitude 25 in towns and communities. We spent our time observing, studying, documenting the place and meeting locals to gain perspective, history and affiliate ourselves with its goings-on.

Left: A drone birds-eye view as we departed Wooleen Station in the Murchison: those two dots on the road, that’s us.  Incredible to see the greater context of the landscapes we travelled.

At the end of each week we would produce an informal exhibition in a public place – whether a poster, booklet, brochure or postcards – as an exchange. The exhibition was a powerful tool to document the change in building types and styles and also a way of giving back to all the people who had given us their time, creating conversation and education around Australian architecture.

At Stop #12, Alice Springs, a local termed this “Ngapartji-Ngapartji”, meaning “to each other, reciprocally, cooperatively” – Pitjantjatjara/Yankunytjatjara to English. There, we looked at the nature of ‘edges’.

This connection outside of the inhabited edge and with inland Australia allowed us to connect with the reality of our country, broadening perceptions of the role of architecture. As fringe-dwellers we rarely encounter the entirety of the built environment, from food production to waste management, we almost never see the third world conditions that still exist in our own country.

By observing and not ‘designing’ on our journey, we have allowed ourselves to come to terms with the fundamentals of a building; water, waste, shade, materials, heat, coolth and people, the things that matter more than the sexy staircases and vogue interior design trends. While the focus still remains on the cushy coast, we’ve realized the incredible opportunity for agency that exists when stepping beyond the inhabited edge into the seemingly forgotten inland.

Whilst the beaches may be dominated by million dollar houses, the deserts are dotted with innovative shacks of re-purposed materials and relic buildings of aspiration. However, the future of building is becoming ever more dominated by dongas.

Right: With our audience in Windorah. More interested in our bikes and the ice blocks than architecture, the kids nonetheless loved the idea of building with dirt and realised just how good ‘shade’ is for different things!

Big opportunities for creative and critical thinking (which architects are trained for) exist for huge sections of inland Australia where industries are dying and Indigenous art and tourism are becoming over-saturated, compromising the identity of a place.

Cities are where we face huge challenges, but perhaps there are answers beyond the city edges. Contrary to most people’s belief, work in the construction and architecture professions in the inland of Australia looks ever more inviting: there is a direct-ness to life and architecture beyond the cities that is alluring.

With growing urbanization, house sizes and computational design, the actual realities of living were, for us, becoming blurred. It seems that not until the entirety of a place and the broader role of architecture is understood can the effectiveness of “architecture” be measured in its ability to make people’s experiences of a place better, healthier and more comfortable regardless of overcrowding and bad weather. It’s about taking architecture beyond houses for the rich.

As people in the lower income brackets look at buying ‘affordable’ real estate (we belong to this category), they are pushed to the outer limits of the city edge or up high above any sort of street life. Cultural and social poverty becomes entrenched. Perhaps it’s time for a revolution in affordable housing, inland-centric, in places which are yearning for creative thinking.

Amazing projects like Nightingale housing in Melbourne (and soon nationally) are looking at alternative development, operating on a triple baseline model of economic, social and environmental considerations, but still this ‘affordable’ isn’t attainable for many .

Furthermore, rarely does architecture mention ‘place’. There is no conversation about groundwater, waste material, and ecology or soil quality when thinking about building design. Cities seem to remove us from primary production and elevate social and cultural needs to a level beyond those basic human needs. The fundamentals are no longer tangible and responsibilities have become blurred.

Left: Some dongas we observed in Useless Loop, a closed town and salt mine run  nestled in the Shark Bay World Heritage Park. Common across the inland, they are easy and economical in the short-term.

The Grand Section is only a baseline study, a journey giving us skills, confidence and a direction for our own future agency. Feeling the red dust under our feet we have begun to unveil the realities of our own country. We hope The Grand Section will reinvigorate conversations surrounding Australian architecture, especially within tertiary education institutions and in the seemingly forgotten inland.

Whilst we take a breather after a year-long trip we are writing a book, compiling all of our learnings into a resource journal for fellow professionals and students of architecture, and a roving national exhibition off the back of our bikes for mid-2018 to carry on the conversation.

Maybe the next time you need to catch the bus, take a bike instead and just, keep on going… 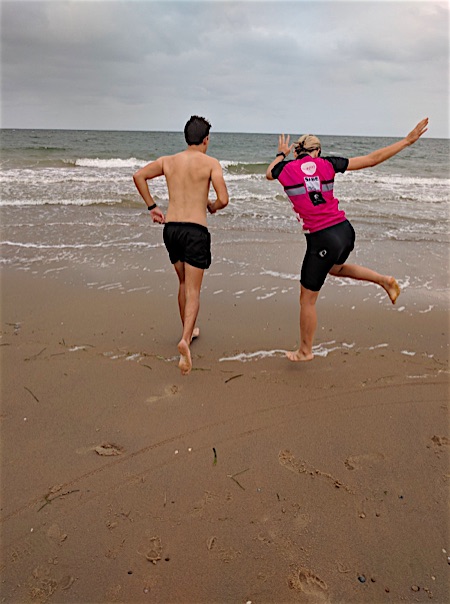 Left: 10 months, 7650kms, almost no bad weather and the highly anticipated swim in the Indian Ocean was brown and choppy … perfect.