With nothing on the horizon by way of major private investment in Alice Springs during 2018, the one exception is a company listed on the Singapore stock exchange.

It is Lasseters International Holding Limited which owns the casino and tourism complex in Barrett Drive and leases from the NT Government the adjacent convention centre, hosting 246 events with 11,400 delegates each year.

Lasseters entered into a franchise agreement for the hotel with InterContinental Hotels (IHG) in December 2016, which includes the Crowne Plaza in Alice Springs, also in Barrett Drive.

Dato’ Jaya J B Tan (pictured in “the 300 list, the definitive guide to who’s who in Malaysia”) is Lasseters’s executive chairman.

He graduated from the University of Arizona, is a mechanical engineer by training and – according to the Lasseter’s website – has extensive experience in forestry, property development, food retail operations, trading and financial services.

He has served as chairman of several companies quoted on the stock exchanges of Malaysia, United Kingdom, Singapore, Australia and India, including Cypress Lakes Group Limited in Australia.

He is the vice chairman of Park Hyatt Saigon, a 259-room 5-star hotel in Ho Chi Minh City, Vietnam, and is also involved in gaming business in Papua New Guinea.

So what’s high-flying outfit like this doing for Alice Springs? Quite a lot.

All up it has spent $455m on expansions and renovations. It has not paid dividends since 2008 but re-invested its gains in The Alice. The firm spent $50m over the past five years on capital expenditure.

It is the town’s biggest private employer with more than 300 staff and a payroll of $13m a year. With 36 years in The Alice the firm can claim to be a local.

Currently Lasseter’s is spending about to $6m on refurbishing 139 of its 205 four-and-a-half star rooms, a project which the Murdoch press headlined as “Casino snubs Alice traders”.

Mr Jervis says it’s rather the other way ‘round: Had the local traders sharpened their pencil they would be on board, as in fact many are, anyway. 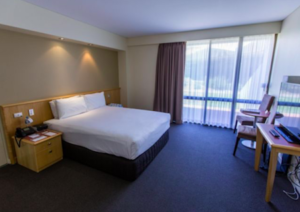 He says: “Any major work will be outsourced independently to a professional project management company, PMC, to handle all tendering procedures and leading to a final recommendation to the board.

“PMC work closely with us. Except when there are any manifest errors, the board will accept the recommendation based on several factors including pricing, past work experience in similar standard hotel refurbishment and quality of finishing.”

Mr Jervis says four companies were selected to tender for the contract – two local and two interstate.  One local and one interstate submitted conforming tenders.

“The successful company has undertaken extensive hotel works within the NT previously and was 15% below the other’s quote.”

The winning company awarded about $3.1m of the $5.03m of the total builders contract to local contractors for 62% of the work.

The casino, as the complex is locally known, annually spends $5.6m with 231 local suppliers.

On the flipside are the effects on gamblers and the style of gambling available.

When Lasserter became Australia’s first mainland casino in 1981 (Hobart was the nation’s first), it was meant to be “a magnet for high rollers and a major tourist attraction, free of poker machines”.

This was readily acknowledged at the casino’s 21st birthday in July 2002 by Marshall Perron, guest of honour at the bash, NT Treasurer in 1981, and later Chief Minister for eight years.

He said the Alice and Darwin casinos were conceived initially as “relatively small, high class facilities, and there weren’t to be any poker machines in them.

Today the casino has 15 table games and 310 slot machines.

Far from being high rollers from all corners of the world, the gamblers are mostly locals of limited means, many playing the pokies now spread throughout the gaming area, often during working hours.

Clearly, these are major contributors to the nearly $45m annual gambling revenue for Lasseters, which of course are gambling losses, in a small town.

Lasseters’s financial report for the year ending June 2017 declares a $3.5m profit from operations, down from $4.1m the year before.

But once $4.4m is deducted for finance costs there was a loss before income tax of $1m and a loss for the year of $1.6m. Finance costs relate to cost of borrowings, servicing debt, mainly interest on bank loans, according to Mr Jervis.

He says in 2015/16 Lasseters paid $3.3m each in taxes to the NT and Federal governments, and $2.1m in Community Benefit Fund Contributions.

The owners of the company made just $304,000, according to the financial report.