Batchelor doesn't need Santa. It has Gunner and Scullion. 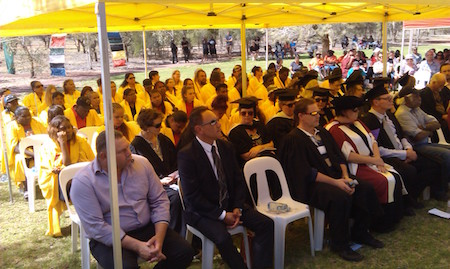 Q: How do you collect a cool $30m a year in public money and get away with giving the finger to anyone asking what you’re doing with it?

It gets its annual budget in roughly equal shares from Darwin and Canberra.

But while the NT government is accountable for money it spends in its own right, it cannot disclose how money is spent which it gives to Batchelor.

Or at least, that’s what Chief Minister Michael Gunner’s chief minder is telling us, while Senator Nigel Scullion’s chief minder remains mum on the question.

And this is what Batchelor’s Communications Manager, Kevin Arthur, is saying: “This is our prepared statement, we will not be making any further comment on this matter.

“We will not be releasing our ASQA audit documentation to any external parties.” (ASQA is the Federal regulator of Tertiary Education, the Australian Skills Quality Authority.)

“ASQA publishes its decisions on its website,” says Mr Arthur.

ASQA says it “only provides its audit reports to the providers that were audited. If the training provider wishes to make an audit report publicly available, that is a matter for them. There is no requirement to do so.

“You may, however, lodge an FOI Act request should you so wish. Details on how to do that are on the ASQA website.”

Should we lodge an FOI request, ASQA tells us that they would need to seek comment from Batchelor which – as we have been told in no uncertain terms by it – doesn’t want the public to have that information.

Says Mr Arthur further: “The matter of quality is ongoing with ASQA and we do not comment on current matters between the Institute and our regulatory authorities.”

And so the mushroom treatment of the public neatly comes full circle as the turmoil in the organisation continues and the level of education it provides is a cruel joke.

In the past year in Alice Springs Certificate III – which are the minimum for leading to mainstream work – went to just 24 recipients. 184 students received Certificate I.

Of these 102 – well over half – were in Access to Vocational Pathways “designed for individuals who require significant foundation skills support to access a vocational learning pathway … reading, writing, numeracy, oral communication and learning skills at Australian Core Skills Framework Level 1”.

Pretty well primary school stuff – yet most of the students are adults.

As this is a decades-long pattern, the failure of the Institute can be gauged by how few students are progressing to Certs III or IV, year after year.

And yet employment and education are ever prominent in the hype of both governments when they address themselves to the intractable problems of the Northern Territory.

The questions we’ve been asking for years are pretty simple (google our site):–

• How many graduates (expressed as a percentage of the total) are absorbed into mainstream jobs and keep them for a year or more? 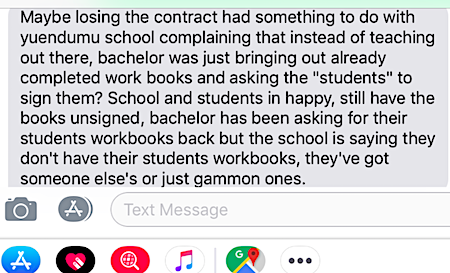 • How many students, in the past three years, have been awarded (respectively) Certs I, II, III and IV?

• Are there irregularities about Recognition of Prior Learning?

• Are there other irregularities at Batchelor and if so, what are they?

There are persistent suggestions of improper Recognition of Prior Learning, and frequent allegations such as these (at right) remain unanswered.

Mr Gunner’s protestations of transparency are hollow while he gives millions to an organisation which treats that principle with contempt.

By JOHN P McD SMITH The Stolen Generation's case for compensation from the Commonwealth for the personal trauma caused by being forcibly removed from their...
Read more