The Centre's landscape brought into a castle in town 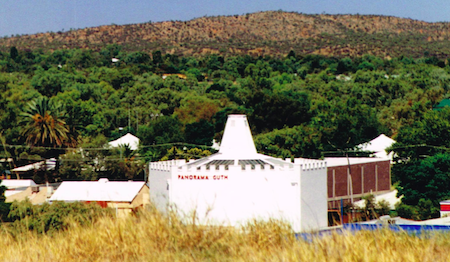 Panorama Guth, the stunning circular painting by Henk Guth, with substantial help from fellow Dutch artist Frits Pieters brought out especially for the project, could be viewed after climbing a circular staircase inside the castle-like tower in Hartley Street.

In the foreground were red sand and rocks for which Central Australia is famous, and many samples of native plants, giving the illusion of standing on a lookout with the landscape and its celebrated features receding into the distance.

Tragically, the building was destroyed by fire on October 30, 2005, almost exactly 30 years to the day since its official opening, recalls historian Alex Nelson.

The images on this page are from a small souvenir booklet owned by Mr Nelson’s parents, Des and Pat, kept in storage for the past 42 years and still in mint condition.

Panorama Guth was officially opened by Prime Minister Gough Whitlam on November 2, 1975, just over a week before The Dismissal.

Panorama Guth is one of several former attractions in Alice Springs that contributed immensely to the tourism industry but have been lost to the town, says Mr Nelson.

“Other examples are Pitchi Richi Sanctuary, undergoing gradual restoration by Heritage Alice Springs, and the national and international award winning Aboriginal Art and Culture Centre in Todd Street, which happened to be directly behind Panorama Guth.

“Ironically the Aboriginal Art and Culture Centre was bulldozed within a year prior to the destruction of Panorama Guth to make way for a luxury backpackers resort, which never proceeded.

“All of these former major tourist attractions in The Alice were closely connected to and inspired by the Central Australian environment and its indigenous inhabitants.

“Something else to ponder: It’s not possible to paint a panorama, or any landscape depiction, of Central Australia today as it was done in the early 70s because the vegetation cover has changed,” says Mr Nelson.

“At the time the panorama was painted, buffel grass was being widely sown throughout the region but was nowhere near as prevalent at it has since become.”