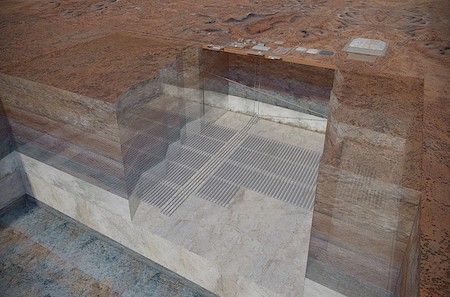 The proposed site is about 120 kilometres south of Alice Springs and 25 kilometres from the nearest community, Titjikala.

The NT EPA identified potentially significant environmental impacts and risks associated with the proposal and made 19 recommendations to avoid and mitigate those impacts.

The NT EPA’s assessment of Australia’s first national hazardous waste repository has been informed by the operation, regulation and learnings from other deep geological waste repositories internationally as well as ongoing discussions with the WA EPA who are also assessing a similar, but smaller proposal.

This proposal comes with environmental and financial risks to the community and the Northern Territory Government. To address these risks the NT EPA has made recommendations consistent with the proponent’s commitment to ensure appropriate financial assurance provisions are provided upfront to the NT Government over the life of the proposal, should it be approved.

A whole-of-project financial assurance would ensure that significant residual environmental impacts and risks are acknowledged, and financial risk to the NT Government is avoided, covering all financial obligations under an appropriate regulatory regime.

The NT EPA supports the concept of a deep geological repository that can store and isolate hazardous waste and has identified further work required to demonstrate that the Chandler Facility is the best option for disposing of hazardous waste without unacceptable environmental impacts now or in the future.

The NT EPA has provided its assessment report to the Minister for Environment and Natural Resources, Lauren Moss, for consideration.

The Arid Lands Environment Centre (ALEC) says in a media release that it has significant concerns about the proposal to store toxic waste “for geological time (forever)”.

The release says whilst ALEC acknowledges the comprehensive conditions recommended by the NT EPA, the capacity of the proponent Tellus to effectively manage the toxic waste in perpetuity is yet to be proven.

Concerns over the project include:

• Types of hazardous waste to be stored including fracking waste.

• Risk of accidents and spillage at the site.

• Transportation of toxic chemicals on local roads and railway.

• Suitability of the site to host toxic waste forever.

• No legislated guarantee that nuclear waste won’t be stored at the site in the future.

“ALEC has has real concerns around the fact that this type of hazardous waste storage facility has never been attempted in Australia before,” says the release.

“There are examples in France and Germany where these kinds of waste storage facilities exist, there are accidents that have happened and there has been a huge environmental and financial cost as a result

“We have concerns around the monitoring, compliance and also the enforcement of the conditions of this project. The NT is currently going through an environmental regulatory reform process and we still don’t know whether the regulations will be stringent enough to manage this type of project.

Traditional Owners claim they have given no consent for the dump.

In a statement they say in community meetings landowners across the region in November reported a high level of concern about the project, and say they have not been properly consulted about its risks.

The statement says locals are concerned about the lack of long-term monitoring proposed and the “potential to leach toxins into the Finke river, less than 20km from the site.

“It’s a danger to our kids, ourselves, especially our drinking water. It will affect kangaroos, goannas, everything. That’s why we are saying no!” Jennifer Summerfield, Titjikala resident, is quoted in the statement.

It says: “Traditional owners argue that information provided by Tellus Holdings Ltd on the hazardous waste storage component of the project was not explained to them during consultation meetings, nor plans for permanent storage and environmental risks.

“The company says they will only provide less than 20 jobs for Indigenous people, and they do not have to come from the local communities.”

Other traditional owners are quoted:-

Vanessa Farrelly, Pertame family member: “[The project] provides almost nothing back to our communities.” said Vanessa Farrelly, Pertame family member.
Anita Ferguson: “They can have their dump somewhere else. They can take the salt but we don’t want the dump and other’s rubbish. It makes it dangerous for us to live here, all the trucks coming through. Within time a truck will have an accident and we will be in trouble.”