No gaol for Peace Pilgrims: sentence 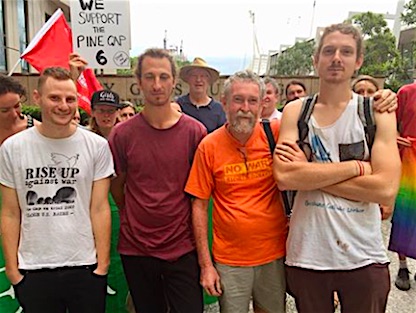 Justice John Reeves has rejected the Crown’s call for custodial sentences for the six Pine Gap Peace Pilgrims, sentencing them in the Federal Court in Brisbane today.

Instead, for their acts of non-violent civil disobedience, the Pilgrims have been fined between $1250 and $5000, with convictions recorded.

A gaol sentence might have made a martyr of veteran Catholic Worker activist Jim Dowling; Justice Reeves preferred to impose the heftiest fine upon him, of $5000. Mr Dowling could yet do time, however, as he told Alice Springs News Online that he would not pay. 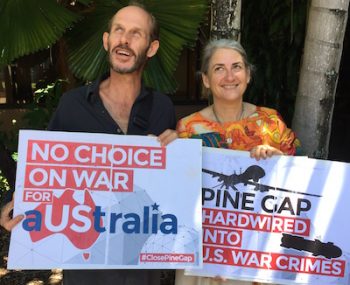 The six Pilgrims were prosecuted under the Defence (Special Undertakings) Act 1952, used only once previously, against the Pine Gap Four, who eventually had their convictions overturned on appeal.

All six are Queenslanders and returned there after the verdicts. Justice Reeves himself is a judge with the Federal Court in Brisbane, though from time to time he serves as an Additional Judge in the Northern Territory Supreme Court, as he did for the trials of the Pilgrims.

Four of the Pilgrims, Mr Paine, the two Dowlings, and Mr Webb appeared in person in Brisbane. Ms Pestorius and Mr Christie appeared by video link from Cairns. The sentencing was also relayed by video link to the Supreme Court in Alice Springs.

KIERAN FINNANE’S reports from the trials in reverse chronological order:

Even if ‘unfair, unreasonable or too harsh’, it is still the law

Strange encounters: the Peace Pilgrim and the Police Sergeant

Peace Pilgrims: evidence on why, not if they were at Pine Gap

Peace Pilgrims fight Pine Gap charges: their actions intended to defend themselves and others from imminent disaster

Peace Pilgrim says he had permission to be on Pine Gap

Pine Gap’s nuclear role and the alternative by RICHARD TANTER

Breaking the violence silence: at home, around the world by Chris Hawke and Joy Taylor