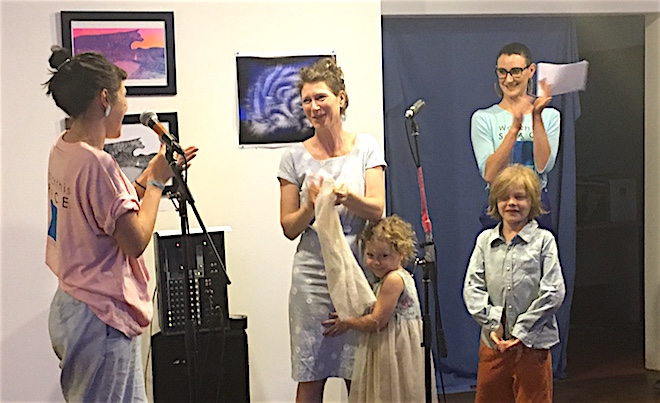 Above: 2017 Lofty award winner Elliat Rich (centre) with two of her three children sharing the limelight, congratulated by Watch This Space coordinator Zoya Godoroja-Prieckaerts (left) and board member Frankie Snowdon (see video at the bottom of this page).

The annual award of the Lofty, for high endeavour in the arts, capped off a big year for Watch This Space as it heads towards its 25th anniversary in 2018.

25 years is long enough for a new generation to emerge and so it is at the Space. The Lofty award is named for its founding coordinator, the late Pamela Lofts: a highly regarded artist and energetic initiator, she would have been delighted to see the evidence, last Saturday and in the year that has been, of the Space’s creative and organisational renewal.

The move from their off-the-beaten-track premises in George Crescent to the much more prominent location on 8 Gap Road opposite the hospital coincided with a major curatorial achievement, the Apmere angkentye-kenhe – A place for language project.

This small arts organisation succeeded in doing what many talk about but are slow to realise. With flair, imagination and vitality, they brought a rich cultural experience, unique to this part of the country focussed as it was on its original language, into the heart of town. It was rich for Arrernte people, rich for other locals, rich for visitors. 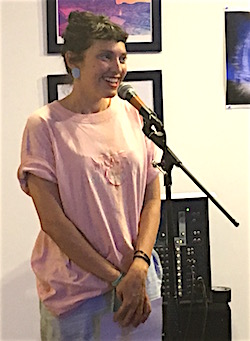 The Space’s hardworking part-time coordinator, Zoya Godoroja-Prieckaerts (left) – introduced by board member Josh Davis as  “a sledge-hammer wrapped in velvet” – was right to acknowledge the enormous contribution of Beth Sometimes to this project along with that of its Arrernte advisory group as well as Batchelor Institute and more than 30 volunteers.

The move from George Crescent after 15 years might have been a more functional matter but it also relied on volunteer energy – carting 18 truckloads of stuff – and in kind support.

Ms Godoroja-Prieckaerts gave a “serious shout out” to the local company Rooster Concept Construction who did the necessary refurbishments so that Space artists now have “studios with actual walls and windows” (a big improvement on the George Crescent facilities). For their financial support she also thanked The Goods cafe, Dave Crowe, Warren Snowdon, and Brian Tucker as sponsor for The Loftys.

In addition to these “big ones”, this year the Space has supported over 140 individual artists, not including all the groups and organisations involved in their projects.

For the first time in its history it hosted a dance residency, for which Frankie Snowdon, Madeleine Krenek and Alex Hullah were acknowledged.

Out the front of the Gap Road premises, a “discursive noticeboard” has been set up – a public art piece that people interact with every day, said Ms Godoroja-Prieckaerts.

Space artists have also been having “national conversations” as “there’s no point in just having a conversation with yourself.”

These have taken the form of visits by interstate and international artists who “come and engage with our community, grappling with the many complexities of our geographical, historical, cultural and weather-intense context”. 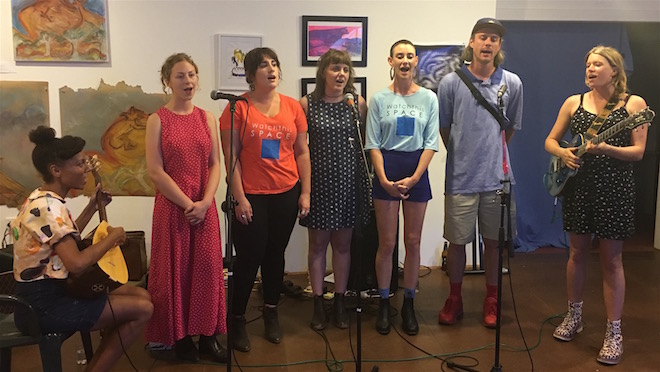 Above: Among the performances on the night, one of several local choirs to have formed recently, Echo Echo, led by Stephanie Harrison (far right) and Emma Stuart (far left).

This included the recent Hobiennale Arts Festival in Hobart, Tasmania, celebrating the humble ARI (Artist Run Initiative) of which Watch This Space is an enduring example. Contributing Space artists were Godoroja-Prieckaerts, Sometimes and Harry Hayes, with an intriguing work about – of all things – the Coles carpark in Alice.

Few locals are probably aware that the carpark is owned by the Bachrach Naumburger Property Group based in Israel. In Hobart the Space artists mused on “what it means to own and manage this carpark at such a distance” as well as “what it is to activate a site or care for a site through art”.   Hopefully they will stage this work in Alice Springs in the near future.

A highlight not often singled out but mentioned by Ms Godoroja-Prieckaerts in her review of the year was the governance training undertaken by the board: “It doesn’t sound entirely exciting,” she laughed, “but we’ve learned a lot and we are feeling so strong as an organisation, and we can now be sure we are sustainable and we are engaged.” 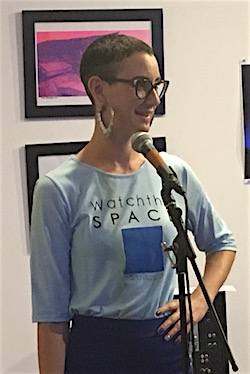 Handing over to Frankie Snowdon (left) for the announcement of the Lofty, Ms Godoroja-Prieckaerts first acknowledged the support of Ms Snowdon’s “energy, motivation and passion”: “I don’t know how she manages it on top of owning a business [The Goods cafe] and running Alice Can Dance – amazing – and having an incredibly strong arts practice. What a woman! What an artist!”


It was an evening of accolades. Ms Snowdon first wanted to acknowledge last year’s Lofty winner, Doris Kngwarraye Stuart, the “prolific, generous, important” apmerekere-artweye (custodian) for Mparntwe, responsible, along with Dan Murphy and Lucy Stewart, for the sacred sites tours supported by the Space for the last nine years. Mrs Stuart is not an artist herself but has chosen to work with artists, including her own family members.

“Some of the most important and integral people in the arts,” said Ms Snowdon, “are the ones who hold space and time for others to create, reflect and converse about concepts and their own practices and who hold that space selflessly.

“So in fact what Doris is a master artist in, is in the art of listening, of bringing together and steadfastly committing to the purpose she holds as apmereke-artweye for Mparntwe.

“Thank you, Doris, for everything you have done to contribute to Watch This Space and the Alice Springs community.”

Without naming this year’s winner, it soon became apparent who she was talking about: work in “design, public art and cross-cultural collaborative practices” that is “recognised locally, nationally, internationally” leads straight to Elliat Rich.

Her career “epitomises what you can achieve when you think big and commit with every fibre you have”, said Ms Snowdon. But she equally acknowledged Rich’s “humble and generous nature as a brilliant collaborator, advocate and ally for and to the Central Australian arts scene”.

As examples of her work, she mentioned the clever and charming Melody Fence at Ross Park Primary School, functional sculptures made in collaboration with Hermannsburg Potters, and Rich’s recent triumph in taking out the Australian Furniture Design Award “for an exquisite piece … an homage to space, distance and the Australian landscape”. 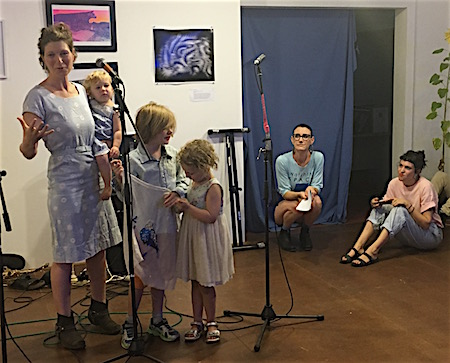 However, singled out for particular acclaim was Rich’s part in creating the welcoming sculpture work – a brightly coloured, large-scale upholstered dome – at the National Gallery of Victoria’s upcoming International Triennial, a celebration of contemporary art and design showcasing over 100 artists from 32 countries.

The work is a collaboration between Estudio Campana from Brazil with Alice’s Yarrenyty Arltere Artists and Rich, with fabrication contributions from bespoke shoemaker James B. Young (for the upholstering) and CAT Enterprise Workshop (for the elaborate steel framework).

“This was a huge undertaking,” said Ms Snodwon, “ which will benefit our arts community in multiple ways …

“It proves that our geography is not necessarily a boundary but perhaps a loyal and rich supporter, critical voice and necessary contributor.”

This was echoed by Ms Rich in accepting her award: The NGV commission has been an “amazing honour and privilege”, she said, and “it is about Team Alice”.

“It was considered a risky project, they didn’t think it could be made here. It was one of the only works [for the triennial] that wasn’t produced in more of a manufacturing setting.

“We have blown it out of the water! As a community we should all feel proud of that.”

She said Alice Springs and Central Australia have “something very vibrant and rich to share with the world”, a place of “unique opportunities” which “creative endeavour is perfectly placed to engage with and express”, a place where “inspiration and challenge come in equal measure”.

Below: SoReal artists Franca Barraclough (left) and Betty Sweetlove lead the dance moves in the forecourt. 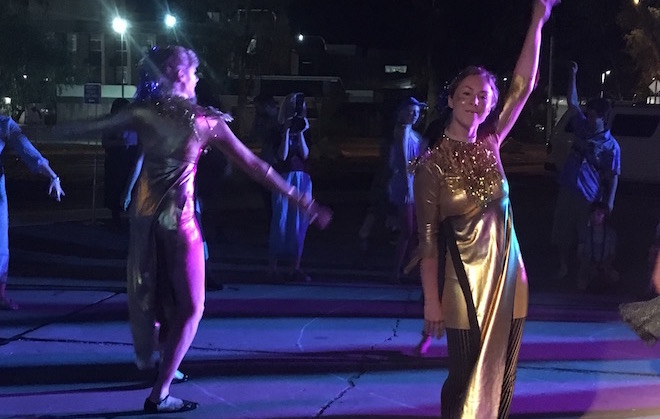 Rovers in form as CAFL returns

By OSCAR PERRI After three rounds played, the Rovers remain undefeated in the senior men’s CAFL this year, with the reigning premiers yet to post...
Read more
Issue 11

By OSCAR PERRI Assault and domestic violence are rising while car theft has dropped, according to new stats, and police say they need help from...
Read more