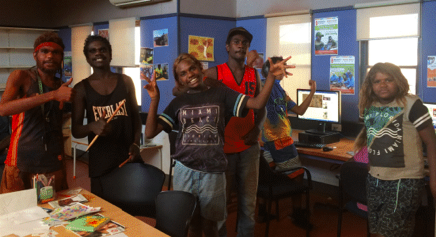 Sir – Arlparra, the main outstation in the Utopia Homelands, is about to lose its adult education centre.

To date the Centre has been run by Batchelor Institute of Indigenous Education, but the NT Government is not continuing with funding that is crucial to keep it open.

It will close just before Christmas and at this stage will not reopen. Not a great Christmas present for the people of Utopia where population is set to grow with 12 more houses to be built there early next year.

The centre has an open-door policy and provides a range of flexible learning opportunities that are tailored to suit local people.

Old people go there to paint and undertake art courses, infants colour in while their mothers study, go on line to bank or access government services. Young people play and learn on the computers. Older youth make music.

Joycie Jones, resident, says: “I’m thinking about kids, they are the main ones, we need to look after them and this place is important for little kids and teenagers.

“If this stops teenagers will get bored, they won’t want to be in Utopia they will probably end up in town (Alice) and be getting in trouble there. That’s what will happen if good things like the learning centre close down in Utopia.”

Clayton Daniel, youth worker and local resident, says: “Good place to go when nothing to do. Learn more about computers. We also make music in there. Sometimes old people go there to do canvass paintings.”

The centre was established by Batchelor Institute in 2003 delivering accredited and non-accredited training.

Utopia has a population of between 600 to 800 mainly Alyawarr and Anmatjerre people living across a group of 16 outstations.

In the first half of 2017 there were over 2000 attendances at the centre, 730 of these were adult women, there were also 216 attendances by infants accompanying parents and carers.

The NT Government has been the key funder of the centre over the last two years through the Community Champions Program which has been cut by the Current NT Government. This program provided around $100,000 per annum to Batchelor Institute to run the Centre.

Batchelor Institute say that increased funding would be needed to run the Centre in 2018, they run similar programs in three Warlpiri communities where they are funded through royalties money. 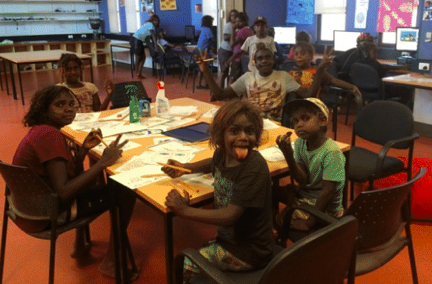 If Batchelor are no longer in the picture, there is good potential other providers to take up running the Centre under a similar model. This would rely on the NTG committing to continuing current funding.

The Utopia Stronger Communities for Children (SCfC) group is made up of community residents who meet regularly to develop and implement plans to improve outcomes for children and families in Utopia. CAYLUS convenes this group and provides support to implement its priorities and projects.