Compromise was needed to save youth crime plan

ABOVE: Is it three to one on this side of the chamber? From left, Crs Banks, Price, Auricht and Mayor Ryan. BELOW: Cr Cocking, with Cr Satour on the campaign trail. 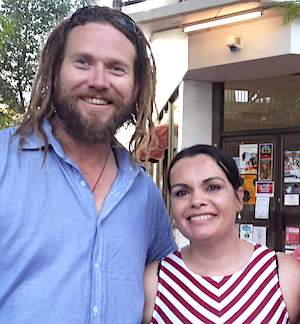 A motion “to build a formal and strong relationship between the town council and the traditional owners” in the fight against youth crime was reduced to merely an agreement to talk about it – but that was necessary to prevent the scuttling of the plan altogether.

That’s the view of Cr Jimmy Cocking who – together with Crs Marli Banks and Eli Melky – supported the original motion from Cr Catherine Satour on Monday.

During a marathon discussion it became clear that Mayor Damien Ryan and Crs Jacinta Price, Glen Auricht and Matt Paterson would be voting against the motion supported by a dramatic address to the council by Apmereke-artweye (high ranking traditional land owner) Phil Alice. He was inviting the council to stand shoulder to shoulder with him and fellow leaders to save Alice Springs, a “town under siege” from youth crime.

What seemed to be destined to become a tied vote was likely to be decided by a casting vote, defeating Cr Satour’s motion. Instead a watered down motion did eventually attract unanimous support.

Cr Cocking said today: “The motion that was passed means the council would still be meeting with the Apmereke-artweyes. Unfortunately we couldn’t get it over the line as the motion was. There were four and potentially five councillors who wouldn’t have voted for the motion with the documentation attached.

“I would have liked it if the other councillors had agreed to the invitation [from Mr Alice] as it was. I was supportive of that motion. It’s important for the community to see a united council on these important issues rather than a divided one.”

NEWS: Was that a sign of disrespect for the Apmereke-artweyes?

COCKING: It was not intended to be. I would hope it wasn’t taken to be one. I would hope the Apmereke-artweyes are still open for the conversation. The document submitted was described as a living document, an initial starting conversation document.

He said the decision lent weight to a motion by Cr Melky later in the meeting to ask for an emergency meeting with Chief Minister Michael Gunner, in presence of the Apmereke-artweyes, to formulate a community safety plan for summer.

Mr Cocking says the opposition to Cr Satour’s initial motion was “a sign of not being fully across what was being proposed.

“Hopefully now, during this week, the other councillors who originally indicated they would vote against Cr Satour’s motion would gain a better understanding of it.”

NEWS: Is it a sign of a split council that there was no discussion between all the councillors before the issue came before Monday’s meeting?

COCKING: In an ideal world everyone would have seen it beforehand, but now the conversation has been had, and I think that’s the main thing. There are definitely different opinions in the council. We all want the town to be a better place, but we just have different ways of going about that.

NEWS: Does that represent a split?

COCKING: Not everyone in the community thinks the same. We are a very different council to the previous one. That’s good for democracy, good for the town if we’re going to have robust discussions about important issues like how we engage with traditional owners, how we acknowledge Aboriginal people who died in past wars, and issues like climate change. It’s good that we have some different opinions than the ‘group think’ that may have pervaded council in the past.