Strange encounters: the Peace Pilgrim and the Police Sergeant 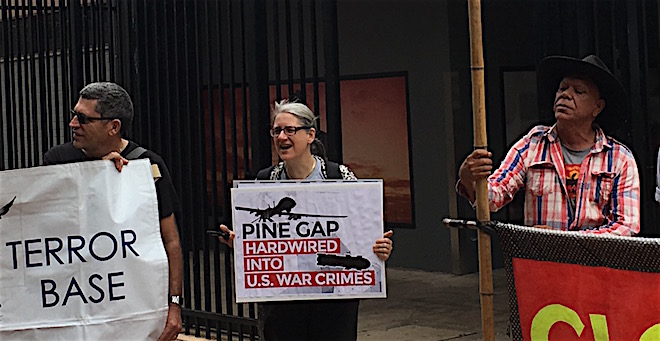 Above: Margaret Pestorius, centre, outside the Supreme Court this week.

Not many cross-examinations begin this way.

From the bar is self-represented defendant Margaret Pestorius, accused of entering the Pine Gap prohibited area under the Defence (Special Undertakings) Act 1952.

In the witness box is Sergeant Kenneth Napier of the AFP’s Protective Services, an employee at the base for some 25 years. He is now Officer in Charge of AFP operations at the military base and in Alice Springs.

Yes, he answers, looking directly at her, unlike most of the other witnesses who fix their gaze on the empty space in front of the box.

He has known her since he first met her late husband, *Bryan Law, a decade ago when Mr Law came to Pine Gap “to do an action”. He was part of the response team arresting Mr Law when he trespassed on the base.

And you sent condolences through Mr Goldflam (the Alice Springs lawyer) when he died?  Yes, he did. 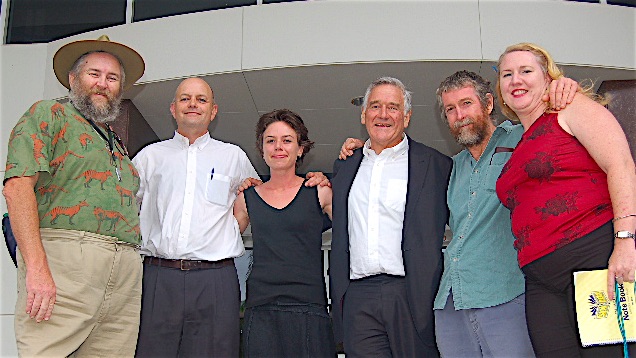 Above: The Pine Gap Four with members of  their legal team, from left, the late Bryan Law, lawyer Russell Goldflam, Adele Goldie, Ron Merkel QC, Jim Dowling and Donna Mulhearn outside the Supreme Court in darwin where the four had just been acquitted on appeal to the Full Bench, 22 February 2008. Photo from the Pine Gap On Trail blog.

There was a point to this, beyond it being a friendly exchange with an obvious degree of mutual respect. Ms Pestorius was trying to establish the knowledge that Sgt Napier, as head of the response team, already had of herself and her fellow Pilgrims.

How would you describe our community, she asked. “Driven,” he replied. She liked that word.

Do we hold our beliefs sincerely? Yes.

Are we generally reasonable people, if a little extreme? Outside the base, yes, inside, no, he replied.

The court had already heard Sgt Napier’s account of the arrest of the defendants. They were climbing a steep hill, known as Mariner’s Hill, playing music. There was no violence.

Sgt Napier knew Ms Pestorius as well as Jim Dowling, whom he had met at the same time as Mr Law. By association with Mr Dowling, he also knew his son Franz. He smiled as he gave evidence of friendly exchanges between them on the night.

Mr Dowling had greeted him on the hill: “Hello, Ken, you’re very fit!” Sgt Napier had been unable to answer as he was breathless from the ascent. Mr Dowling then joked: “Not really.”

Sgt Napier had helped Ms Pestorius, taking her viola, over a large rock and down onto the road where she was arrested. 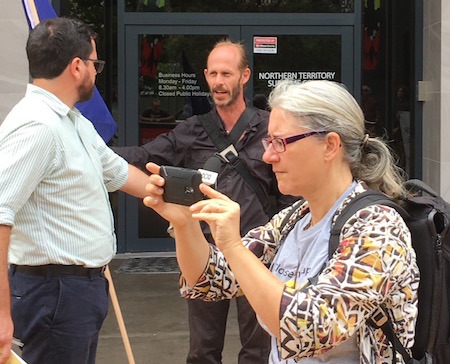 In her cross-examination Ms Pestorius asked how he had assessed the risk her group had posed.

He said his service relies on the National Threat Assessment Centre for their risk assessment in relation to violent protest and terrorism at the base.

Right: Ms Pestorius on the first day of the separate trial of Peace Pilgrim Paul Christie (behind her with ABC journalist Stephen Schubert).

So what level of threat had been identified in relation to the protesters gathered during the IPAN conference late September, early October last year, Ms Pestorius wanted know.

Sgt Napier said his service was alert for potential incursions, whether single or multiple, for lock-on devices and non-peaceful protest. There was no level identified, it was all taken equally.

Did he suspect the identity of the group when they were first detected on CCTV? No, it could have been anybody, he said.

Had protesters been inside the facility before? Yes. He referred to a long history going back to the 1980s, including the past actions of her husband and Mr Dowling.

Twelve years ago, when people (the Pine Gap Four in December 2005) got inside, were they disruptive to the operations of the base? No, he said.

Yet, she put to him, in a pretrial hearing an AFP witness had referred to operations being shut down for five to six days.

From memory, he said, operations did not cease; the front gate was closed, but the business mission was maintained.

Ms Pestorius attempted to ask a question about the location of the video sensors that detected the Pilgrims on the night of their action. Crown Prosecutor Michael McHugh objected: the location is “sensitive”. Ms Pestorius raised her hands and moved on.

Had she seemed to him exhausted on top of the mountain? “Absolutely.” 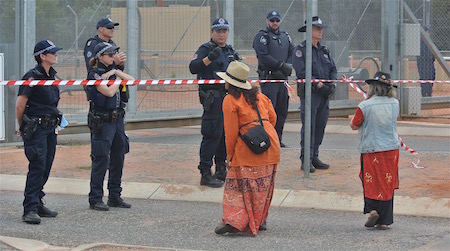 Sgt Napier had given evidence that on Mariner’s Hill he could hear the Pilgrims by their music before he saw them. How would he describe the music that he had heard – was it a jig, rock ’n’ roll, a protest song?

Left: Police and protesters outside the front entrance to Pine Gap, October 2016.

This was another moment of merriment in the court. “I have to declare I’m one of the most tone-deaf people,” he said, before adding that at the time it was just “noise” to him as he tried to identify where those making it were.

Ms Pestorius apologised that the lament they were playing was “not as good as it should have been”. That was because they were still moving through the bush.

The court also saw yesterday the Record of Interview conducted with Ms Pestorius on the morning of her arrest, in fact almost immediately after. She was wrapped in a blanket, yawning more than once and commented a few times on how tired she was, having been up all night.

Nonetheless she maintained the same spirited approach. Without being disrespectful, she tries to keep communication at a human level, resisting the highly impersonal formality of police and court exchanges.

Asked by Federal Agent Peter Davey whether she was a holder of a permit under Section 11 of the Defence (Special Undertakings) Act 1952, she said she didn’t have permission from the US military nor the AFP, but “there are other authorities”. These include the authority of justice, of a just world, and God’s creational authority to speak strongly against war.

The authorities Agent Davey was referring to she had no understanding of and doesn’t pay much attention to them.

She said she had gone to the mountain (Mariner’s Hill) to get as close to the facility as she could, to “bear witness” to its war-making and to lament its “death and destruction across the world” that will “fall back on this land”.

If she had had a chance to get closer to the facility, she would have.

She declined to answer questions about how she had arrived inside the base and said she couldn’t remember having crossed barriers in the dark. She said she wasn’t sure if there was a plan to be there, just that they had all come together to lament what is going on in the world.

She said the base had become a “symbol of denial” of the Australian people.

Was she aware that it was a “prohibited area”? She said there was certainly “a lot of secrecy and denial” around it, that it was very hard to get close to, that there were a lot of police.

Asked about her purpose in coming to Alice Springs, she repeated that it was to go to the ridge and lament the dead of war.

She said she had been involved in a similar lament on Anzac Day this year, remembering the dead of the Frontier Wars. She wasn’t sure about what had happened around Alice Springs, but around Cairns “a lot of people got killed and nobody talks about it”. This kind of denial, she said, is why people pay little attention to “things like Pine Gap”.

* Mr Law was one of the Pine Gap Four who conducted a Citizen’s Inspection of the base on 9 December 2005. The four were famously the first trespassers at the base to be tried under the Defence (Special Undertakings) Act 1952, facing a maximum penalty of up to seven years imprisonment, just as the Peace Pilgrims do. The Pine Gap Four were ultimately acquitted on appeal.