There's more to renewables than sunshine

One of the 10 gas powered engines at the core of the $75m furore engulfing Adam Giles in the dying months of his government. 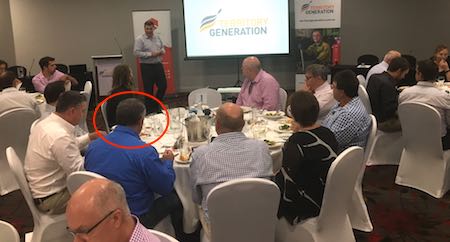 Essential Services Minister Gerry McCarthy (circled) had a momentary relapse into his old job, school teacher, when he launched into an examination last week of Tim Duignan, CEO of Territory Generation (TGen), the NT government-owned electricity producer with assets worth $550m.

McCARTHY: What is the predicted life time of the Jenbacher (pictured at top) gas turbines? [Here the teacher cops a “fail” because the 10 new engines, centre of the furious $75m controversy in the dying months of the Adam Giles Government, are not turbines but piston engines, a.k.a. reciprocating engines.]

DUIGNAN: The design life is 25 years.

McCARTHY: Can they be converted to use hydrogen fuel?

McCARTHY: Can we use existing pipeline infrastructure not only to supply our Territory Generation but also for piping gases to Indonesia or the east coast or wherever we choose?

DUIGNAN: The connection [the Tennant Creek to Mt Isa pipeline under construction] is going to the east coast now. It was the intention to make it largely a hydrogen pipeline in the future.

McCARTHY: Thank you. And this is not an episode of Yes, Minister. [The class laughs.] And could you define the best solar footprint in the island [meaning Australia]?

McCARTHY: You can say Tennant Creek … [which is where Mr McCarthy is the local member of Parliament].

DUIGNAN: The band [of intense sunlight] runs right through WA but the population centres are Alice Springs and Tennant Creek.

McCARTHY: Thank you. And you have heard about the Wiso Basin, the biggest aquifer in the NT?

McCARTHY: Thank you, Tim. These were good answers.

And with this the former chalky headed for the door, turned to say “You see, we’ve got plans. We’ve got plans,” and he was gone.

The 70 dignitaries, business people and other locals at the lunch hosted by Mr Duignan on behalf of TGen started putting two and two together.

His speech was expected to be mainly about fossil fuel vs renewables but in nearly an hour packed with details Mr Duignan ranged far and wide.

The site of the new Owen Springs power station.

That band of sunlight, to which he had referred in a preview given to the Alice Springs News Online two weeks ago, covers all of the continent except that slim sliver in the south-east where most Aussies live.

To get hydrogen you need water which contains twice as much of it than it does oxygen – hence H2O. Water is in the Wiso aquifer.

And to get hydrogen you apply electrolysis to water, using electricity, which can come from the sun.

In Mr Duignan’s narrative the next step could be adding nitrogen to the hydrogen to make green ammonia. If you add phosphate – and there is “a big phosphate mine near Tennant Creek,” as Mr Duignan put it, it “equals fertiliser and there is some very good agricultural land around Central Australia.

“Ammonia is also used for explosives in the mining industry.”

All in all, “a vision that would equal a lot of jobs and income,” Mr Duignan told the lunchers.

No wonder the teacher was pleased with his pupil: As Minister Mr McCarthy is embroiled in the awkward conundrum of his government’s keen promotion of the Northern Pipeline, already under construction, notwithstanding that it is still anyone’s guess what the government-initiated “independent Scientific Inquiry into Hydraulic Fracturing of Onshore Unconventional Reservoirs in the Northern Territory” will announce.

What TGen’s lunch guests were learning was that there may be method in the madness after all: What might flow in that pipeline is not necessarily that nasty hydro carbon natural gas obtained by fracking, but something that comes from water.

That still leaves unanswered the question what we will be doing with all that gas for which Chief Minister Paul Henderson signed on the dotted line all those years ago.

Mr Duignan said at the moment TGen is using 18 petajoules of natural gas a year, worth $160m. This will drop by two-thirds if the government’s target of 50% renewables by 2030 is met.

“Previous governments and Power Water Corporation have a contract containing provisions that gas has to be used or we have to pay for it anyway,” Mr Duignan said.

The Territory’s main gas supply agreement with ENI is with Power Water Corporation.

The contents of that agreement are commercial in confidence, however they include “take-or-pay obligations under a 25-year gas purchase agreement, the first supply of which commenced in the 2009-10 financial year” (2017 PWC Annual Report).


Apart from the questions about what to do with any surplus gas, the 2030 date is fortuitous for the march towards renewables: 40% of TGen’s assets will need to be replaced by then which makes “the target of 50% renewables very achievable”.

But it will cost lots of money, said Mr Duignan, likely to need private capital.

He says in the forward planning for renewables in power generation, doing nothing was not an option, and handing it over entirely to private operators would disadvantage the consumer, hinting that this would not suit the government at an election time.

“Managed transition” is regarded as the cheapest option, with central planning by a Utilities Commission, a new part of government, as the “rule maker and rule keeper,” says Mr Duignan.

It would be in lock-step with an independent system control “away from the PowerWater network” and deciding about the technology, “where and how much”.

Accessing some private sector capital would still be a necessity: “We may not own everything in the future” so the government doesn’t have to fund everything in the transition, while always “ensuring that the electricity load as required is available”.

The boffins will need to put their minds to things like molten salt storage – is it cost effective? Hot water on your house is a form of energy storage. Another is making ice during periods of low electricity demand for other purpose, and running the aircon off that big tank of ice. Graphite technology could be a game changer in battery storage.

In reply to a question from a RePower Alice Springs member, Tim Brand, Mr Duignan said feed-in tariffs – what private rooftop power producers get for electricity they feed into the grid – are not the business of TGen, but the assets involved certainly are.

“We are a wholesaler,” he said.

“We’ve yet to get our mind around how we harness rooftop solar and household batteries into a virtual generator through our Remote Operation Centre [in Darwin], not all working independently but as a homogenous group of generation equipment. Cracking that nut will be the future.”

The task would be “to make solar affordable for any householder, that people who can least afford renewable technology are not penalised with higher priced delivered electricity because they can’t afford to put in solar technology”.