Rock climb to close: Who wins?

ABOVE: “Joint management” can have surprises store in store for our major tourism assets. Are the West MacDonnells next? Check about the highest peak of Mt Sonder being off limits. BELOW: Climbers ignore the sign at the base of The Rock. 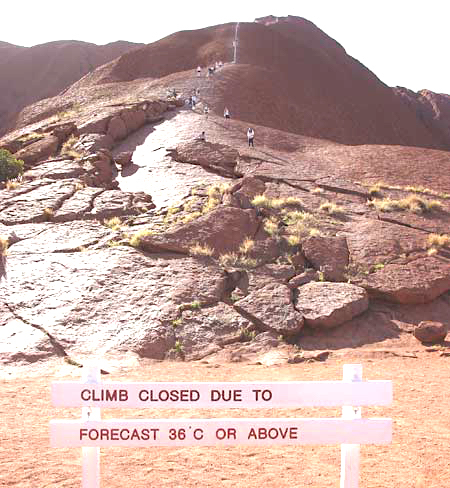 There is no question that climbing Uluru is one of the most superb tourism experiences in Australia. It will come to an end in two years’ time – officially, at least.

Restrictions in which other parks are next?

Parks run both by Parks Australia (Canberra) and Territory Parks (Darwin) have management structures that gives decision making power to a handful of private owners while the general taxpayer foots the massive costs.

For example, in 2016/17 the Uluru management board of 12 had eight Indigenous members. On the board of the West MacDonnell Ranges, vital for the development of the tourism industry in Alice Springs, the numbers are 13 Indigenous, two non-Indigenous.

In my 41 years in The Centre I’ve climbed The Rock perhaps seven times, and been in that national park probably 300 times.

A mate and I climbed it on a stormy night that was so black that we had trouble seeing from one white mark on the ground to the next. We were climbing mostly on our hands and knees. The already fierce wind, accelerated by the half-venturi effect at the top, threatened to blow us into the void.

This is a world away from today’s regimented and constrained tourism.

My other climbs over the years were benign and the view over the desert and across to the Olgas (as they were known then) was magnificent beyond description.

Over the years I encountered vastly different opinions about climbing The Rock.

To me the most significant came from the most senior of all custodians, the late Paddy Uluru, decades ago. I was talking with him alongside the monolith.

He said, words to the effect: If you are stupid enough to climb it, go for it. He surely wouldn’t. He said there is not much water up there, if any; hardly any plants and no game.

But he would never tell me the full story about The Rock, he said, only a few basic parts of it. It’s the story that is sacred and secret, not the landform.

Clearly there are other views abroad today as this week’s statement by Sammy Wilson illustrates.

Sustained opposition to climbing over the years has come from predictable sources and the debate, usually heated, has been chronicled in tens of thousands of words in our seven million word archive on this site (google it – and don’t forget to use the name Ayers Rock as well).

The official version of the climb decision, dutifully trotted out by the majority of media yet again, displays a surprising and deplorable attitude toward sacred sites.

In most other countries they represent the essence and beauty of religious faiths whose adherents would say to you, come and see our sacred site, enjoy it, learn from it, feel elevated by it. It would be needless to say respect it.

It would be absurd to expect the Catholics to discourage anyone from visiting the Papal Basilica of St. Peter in the Vatican and exploring every nook and cranny. They wouldn’t dream of telling tourists to just look at it from a distance.

So who are some of the usual suspects against climbing, and what are they on about?

• Aboriginal activists were having a ball for decades threatening closure:  For every “gun to the head” of traditional owners there was one to the head of the tourist industry or government.

• Rangers and tour guides: It’s a big task to carry down people who’ve had a heart attack. However, full marks to those who are and have been providing the safety backup for an iconic adventure for millions of people. A reported 35 have died since climbing started to become popular in the mid 1930s.

• Those who foist views against climbing, which they are entitled to hold for themselves, onto others who regard climbing as the adventure of a lifetime. As it turns out the the nay sayers are now getting their way.

• Those who argue that only 20% of visitors now ascending the climb, and therefore closing it is OK. That’s a cynical Furphy: The decline is largely caused by temporary closures imposed by the people who have the most to gain from it – park staff. They often draw a long bow on safety issues, or at times cite reasons with no links to safety.

• The numbers are perhaps also down because people who want to climb have given up, recognising the chances of being allowed to climb are slim. They just don’t go to the Uluru park. The climb was closed for parts 229 days of the 273 days between January 1 and September 30 this year. That’s 84% of the days.

Both NT and Federal parks have management boards that have the power to instruct the lessee, namely the respective government parks services. These services are obliged to follow board instructions.

In the case of Uluru the board must have an Anangu majority. In fact in 2016 it had eight “traditional owner nominees” chosen by the Federal Minister from nominations by the Anangu community, according to the Parks Australia website.

The other four board members were Sally Barnes, Director of National Parks, two people nominated by the Ministers for Tourism and Environment, respectively, and one from the NT Government.

So we have a tiny group of people in control of one of the nation’s most significant tourism assets, owned outright by a small number of private people, and operated by a staff entirely paid for by the taxpayer. Good work if you can get it.

The 2016 annual financial report of Parks Australia, whose parks apart from Uluru–Kata Tjuta also include Kakadu and Booderee, lists “receipts from government” as $40.5m.

Their joint management structure is similar to the one at The Rock.

“The land owners are the traditional owners for those lands held by the Tyurretye Aboriginal Land Trust and the park was leased to the NT Government for 99 years.

“It has a joint management committee that represents the partners – traditional owners and government. 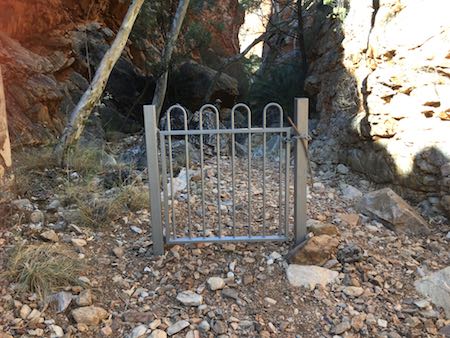 “The committee is the governing body of the park which approves local guidelines and criteria to guide decision making, strategic plans and some permits including commercial operations,” Mr Day says.

“The committee has 15 members, 13 of whom are traditional owners, and two park / government representatives. This number is not defined by legislation so it could be varied.

“The committee members are nominated and accepted by the traditional owner family group, who are members of the land trust holding title to the land.”

Parks and traditional owners’ interests have clashed before, and recently this little gate (above) has appeared just off the Larapinta Trail.

Heading off on the trail towards Alice Springs from Standley Chasm, you first climb “the Staircase to Heaven”, leading to an outlook with a 360 degree view that will take your breath away.

Trekking down the other side you come to a creek that flows towards the chasm and through it. To continue the Larapinta trail you turn left – upstream. But if you turn right – downstream – a wonderful walk, mostly in the shade between two ranges, will take you to the northern end of the chasm.

It’s a two or three hours round walk for reasonably experienced walkers back to the charming and increasingly popular restaurant and camping ground. But what’s with the gate?

(Links takes you to the issue in our foundation archive, scroll down to find the headline)