Above: Katherine in its regional context. A screen capture from ‘An evolving master plan for Katherine and the Big Rivers region’.

How will the Northern Territory town of Katherine develop a good future for their “children’s children”?  This is the question guiding the town’s thinking about their master plan, a “living document” identifying the strategies that will strengthen what’s working well in the town, that will tap into new opportunities, and will also deal with what’s not working well.

The master plan has been developed by Katherine Town Council’s get-up-and-go CEO, Robert Jennings, who is two years and eight months into his position. He previously served as CEO in the Shire of Nannup, WA, and as General Manager on Hepburn Shire Council in Victoria.

Katherine, situated on the Katherine River and at the cross-roads of the Stuart and Victoria Highways some 320 kilometres south-east of Darwin, has a population of close to 10,000. It is the Territory’s fourth largest town. 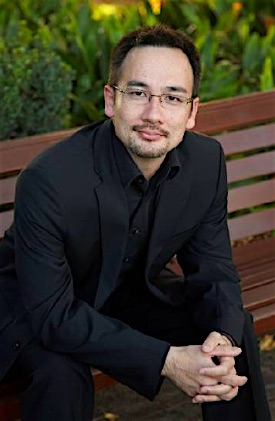 Mr Jennings himself took the initiative on developing the master plan, helped no doubt by his string of qualifications, including in architecture, economics, management and leadership.

What lessons can Alice Springs learn from the experience of our northern neighbour, as our Town Council takes somewhat hesitant steps towards developing a master plan? With this in mind,  Alice Springs News Online spoke to Mr Jennings.

“Basically I spoke to as many people as I could,” he said, “elected  members, staff, members of the community, government departments.

“After all that put I together a synopsis of what everyone was talking about, the vision for their state and their town. This I filtered down to a series of key projects in different areas.”

As Mr Jennings speaks to people, he fills them in on where the plan is heading and then updates it to reflect each new person’s comments: “So now it’s become not just the Katherine Town Council area but more and more a regional masterplan.”

Before even starting, Alice Springs Town Council has rejected a regional approach, with the simplistic argument that council has no control over regional council decision-making.

As Mr Jennings explains it, the process is not rocket science:

“And I also asked whom should I speak to next. You always get the same people who come to you, usually those who are more confident or they’ve got complaints, a mix of people, but you sometimes miss out on people who have valuable feedback.

“By asking whom should I speak to next, I started to get to other people who might not normally be on the list but whom people respected, who had a valid viewpoint, of course everyone does, but who had a bigger piece of the puzzle to contribute.”

The process takes time, but the ‘living document’ approach allows a start to be made quickly and put out into the public domain.

Mr Jennings uses presentation software called Prezi, which supports a story-telling approach, allowing the speaker to show an overview and then zoom in on particular elements. He usually takes around 20 minutes to talk to the document. 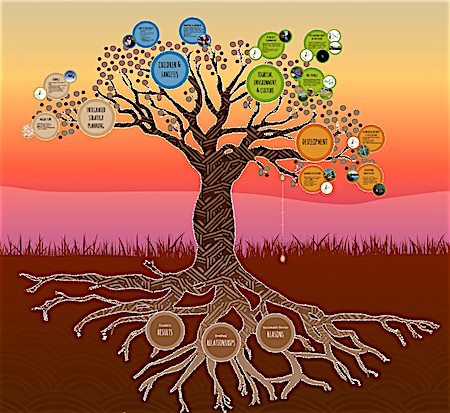 To progress the plan, Katherine Town Council is working work with its neighbouring regional councils, Roper Gulf and Victoria Daly, as well as with the NT Government.

While the Alice Springs Town Council waits for the NT Government to come on board with the  master plan, Mr Jennings says the government has inserted “the major elements” of Katherine’s plan into their 10 year infrastructure plan and are “active partners in most of the projects”.

In essence, the vision for Katherine is of a place “where people are united, an enriched community, working together, planting the seeds, growing our enriched tree with its many arms, for our children’s children – a vision that everyone wants”.
These “arms” include developments in defence, tourism, agriculture, mining, along with the community and economic infrastructure to support all that.

Council’s role is visualised as enriching the soil in which the tree grows. The three Rs are no longer the minimalist Rates, Roads and Rubbish, but rather Results, Relationships and Reasons:

“We’re here because we are delivering excellent results, delivering enriched relationships and we’re also making sure that we are here for the right reasons – sustainable service,” says Mr Jennings.

He says detailed work has already been done on three to four years’ worth of the plan, taking into account its 10 year framework and longer term vision.

So how will success be measured?

Mr Jennings updates the document on each project to see how it is tracking. With construction projects, the measures can be readily defined and seen, but with a goal like achieving unity within the town and region, the measure might need teasing out.

Mr Jennings gives an example: “Katherine has eight to nine Indigenous peoples. To achieve unity, we are working towards getting a representative Aboriginal group that has the voices of all the people of Katherine on there. If we achieve that task and they are having representation in our meetings then we are starting to achieve that unity.”

Master plan could turn around population and economic slump

How vision and planning reversed a small town’s fortunes