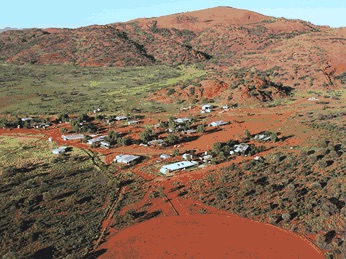 Further evidence has emerged suggesting the administration of APY Lands in the top end of South Australia is in turmoil, with senior staff apparently ignoring instructions from a special general meeting and an executive meeting.

These instructions included the termination of the appointment of the APY General Manager Richard King, who is still there, and gave strong indications that the executive wants  greater control over an extensive system of commercial agistment of cattle that is part of the APY’s activities.

The Alice Springs News Online has obtained copies of the minutes of the two meetings, and their content and authenticity has been confirmed by Bryan Miller, General Manager of the PY Ku Aboriginal Corporation which operates in the lands. (It owns and manages a network of remote transaction centres that combine service delivery for government agencies and access to technology for community.)

Mr Miller was present at one meeting and took the minutes for the second one.

The special general meeting on March 27 was attended by 35 people representing Ernabella, Fregon, Amata, Milily, Nyapari, Indulkana, Watinuma and Kalka and was presided over by then APY chairman Trevor Adamson. The chairmanship has since passed to Frank Young.

According to the minutes, the meeting resolved unanimously that Mr King “has failed to exercise a reasonable degree of care and diligence in the performance of his functions and that [his] appointment … be terminated, effective immediately”.

The issue was raised again in a special executive meeting of the APY on June 23.

Resolutions by seven executive members, present or on the ‘phone, with Mr Young in the chair, included these:–

• All staff and contractors of APY … including the ‘total grazing pressure’ cattle manager shall take direction from the APY chairperson … except to make advance payment (including cattle money) to or for the benefit of a member of the Executive board … not already authorised by the Minister under the APY Land Rights Act (1981)”.

• That “any issued retainers and permits concerning [six lawyers including Alice Springs based Ruth Morley] are terminated forthwith, and APY is not to continue to engage or pursue services from any of these people”.

• “The General Manager Richard King is reprimanded by the APY Executive board” for 12 named alleged acts or omissions.

• The meeting suspended Mr King “pending further resolution without pay” and canceled his permit to be in the Lands.

The Alice Springs News Online put the issues raised in this report to Mr King and Ms Morley at 7:55am today.

Our email said: “The above is clearly in contradiction of Ms Morley’s assertion: ‘I warn you not to quote Frank Young wanting to dismiss Richard King as Chairman of the APY Executive Board. There is no resolution about this from the Executive Board. Such a statement is misrepresentative and defamatory’. In fact there are resolutions from a special general meeting and an executive meeting,” we said. “Your comment, please.”

And: “The minutes of the second meeting make it clear that cattle are in fact the business of APY, a statutory body of the SA Government, and as such obliged to transparency. Ms Morley’s statement ‘grazing on APY lands is commercially confidential and APY are under no obligation to disclose anything about it publicly’ is in conflict with that. Your comment, please.”

We have received no response by the time of publication, but will report any response that we receive.

Photo: Watarru community about 200 km south west of Uluru in the APY Lands of South Australia. (SA Department of Education.)